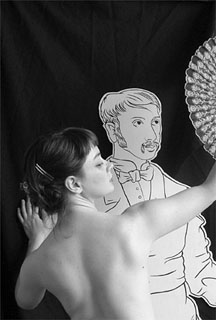 May offers a chance to see both works honed in Brooklyn neighborhoods and other works by choreographers far outside of New York—Australia to be exact. I hope the performances featured here serve as a small testament to the bevy of choreographers and dancers who’ve been working outside of Manhattan, once the seeming nexus of cutting-edge dance. Brooklyn-based choreographers present new works at two Brooklyn-based venues, the Brooklyn Arts Exchange (BAX) in Park Slope and Soundance at the Stable in Williamsburg. Australian-based company Chunky Move kicks off Dance Theater Workshop’s 2005 Guest Artist series, which runs through late July, and Julian Barnett presents his latest dance-theater work at La MaMa.

Kimberly Brandt’s something we can both be proud of, May 6–7

As part of the Brooklyn Arts Exchange’s First Weekends New Performance and Discussion Series, Brooklyn-based choreographer Kimberly Brandt presents a new work, something we can both be proud of. It’s no secret that the dance world is competitive, as is the competition between dancers. Brandt examines this within the context of a performance and questions what it means to “win.” The dancers—Brandt and Dawn Ravine—are opposites in terms of physique and their interpretation of the movement. At times one is frenetic, while the other is more aloof and calm. Which performer will viewers be drawn to, and why? Who wins? something we can both be proud of attempts to answer such questions.

Tokyo-born Barnett came to dance through break dancing in California, where he grew up, eventually moving on to dance with Doug Elkins, Larry Keigwin, and Mark Dendy, to name a few. Barnett brings his most recent dance-theater work to La MaMa’s The Club. Dub a Hole in the Ground promises to be a challenging work that pushes the boundaries of more conventional performance. Viewers will be confronted with an aesthetic that looks at the fine line between “grace and violence.”

Sarah Edgar, a member of the New York Baroque Dance Company who has reconstructed baroque dance for performance, adds a modern dance sensibility to her first evening-length work, Courtesan. Composed of six vignettes, Courtesan takes both a serious and humorous look at the world’s oldest profession, featuring contra dances of the 18th century polished up for the present; here Edgar conflates contra and contemporary dance for an update of the seemingly stuffy but quite steamy 18th-century social dances. A parody of parlor games is promised too.

Soundance at the Stable
281 N. 7th St. (between Havemeyer and Meeker), Williamsburg