Buzzer Thirty and the Chocolate Factory 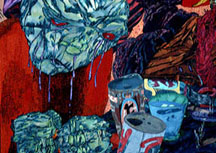 Scott Lewis, detail, “‘The same as any other night’ muttered Hank…” (1997), gouache, watercolor, acrylic, ink, pencil, etc. on board. Courtesy of the artist.

Hank’s blue and green face, lined like crisscrossing rail lines, hangs over his booze (“Hank,” 1997). His tears appear to be skin literally dripping off his face into his clutched hands. Norm, a man on his way to work, eats his end-of-the-week doughnut only to have his “little treat” disrupted by a grotesque character defecating on the subway stairwell (“Norm,” 1998). Whatever happiness Norm gets from his weekly doughnut routine is interrupted by a brutal invasion. Delphine, her bouffant hair piled on her head like seaweed, her way-too-small camisole barely containing sagging breasts, tipples from a martini glass balanced on her fingernails (Delphine, 2001). The texture of her oxblood-red skin is that of flayed muscles.

Scott Lewis says he wants to get beneath the surfaces of his characters, and he’s not kidding. His paintings are fraught with biting humor and packed with visual puns, with an eye to those “desperate for acceptance, desperate to dominate a situation or desperate for the good times that ultimately disappoint.” Like the paintings of the German Expressionists, angles are skewed, the figures absurdly distorted, often grotesque, flying off the picture frame. As Lewis says, they are “twisted visually and emotionally.” In Max Beckman’s etching, Woman in the Night (1920), a woman lounges on a divan as a male voyeur peeks in through a closed window. Like Lewis’s Jocelyn (2005) the onlooker has desperation and sadness in his eyes. In Beckman’s City Night (1920), the perspective is at irregular angles, figures float in the picture frame, the setting apparently a dive bar—pictorial elements that are typical of many of Lewis’s paintings.

Scott Lewis was born in Los Angeles and raised in Brooklyn. He studied at the School of Visual Arts and now lives in Queens. His current show at Buzzer Thirty in Astoria runs through May 14, and he will have another show at the Chocolate Factory (Long Island City) in the fall. Painting on illustration board and canvas, Lewis’s materials include gouache, acrylic, ink, watercolor, pencil, and pen. He cites the transparent pages in anatomy books as an early influence, how they isolated layer upon layer of muscle, “so intense and brilliant.” Not surprisingly, the colors in his paintings are vibrant and otherworldly. Lewis pays obsessive attention to texture, shimmering tones, and detailed line work. Jackets, nylon stockings, shoes, fingernails, flesh, and hair have the line quality of George Grosz and Egon Schiele.

Like the late Leon Golub, Lewis uses the figure as a jumping-off point. Both painters have developed their own unique vocabulary and work with determination and consistency within that framework. One has to take the work on its own terms. There are also similarities in the physicality of the painting, in how the human figure is turned into the grotesque and the disconcerting ways people in the paintings relate to one other.

Lewis writes narratives to accompany his work because he believes it is important for the artist to explain “the intent behind the work.” They also serve as another aspect of the artwork, digging deeper into the represented figures. The writing has a kinship with Len Jenkin’s plays, which mine the seedy, noirish, sideshow side of America. The characters in Lewis’s paintings are third-rate television soap opera actors, self-deluded beauty queens, socially hopeless barflies, petty schemers. Self-image and self-delusion are recurring themes. Hank’s prospects of getting a date (“Hank”) hinges on the orange sweater he dons for his evening out. Making a connection with others depends upon the proper workout regimen, the sure-fire conversation, the right look:

The skirt was the right length, hair so shiny it looked like old shellac 78’s, her breasts discreetly yet provocatively displayed in silky white, but her expression wrong. It was weak, lacking in confidence.

Scott Lewis’s vibrantly desperate humans could be the deluded characters in Nathanael West’s Day of the Locust. His paintings and stories are akin to those nightmares one wakes from in the middle of the night—disorientating, surreal, yet scarily familiar.

GARY WINTER is a member of (soon to implode) 13P.

Tishan Hsu has been exploring the messy entanglement of bodies and technology for over three decades. Spanning painting, drawing, sculpture, photography, and video, his work is characterized by a slippery lexicon of biological and technological motifs—lingering on the touch in touchscreen and the face in interface—that probes the more visceral, affective, and lived aspects of our relationships to machines.