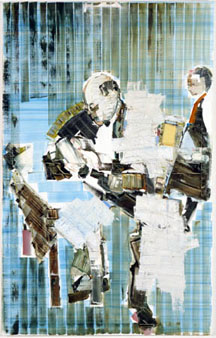 Magnus von Plessen, a German artist exhibiting for the first time in a New York gallery, paints representational paintings about representation. It’s an occupation fraught with philosophical difficulties, like trying to think about yourself thinking. It takes a studied familiarity with the conventions and mechanics of painting to get viewers to suspend the usual ways we look at a picture—as beautiful, as telling a story, as symbolizing something—and concentrate instead on the fundamental fact that a picture is something that’s made, and on all the mental and material processes that go into making and looking at it.

In the service of this aspiration, the artist has placed on his practice some indefinite but still rigorous limitations. The subjects represented are, generally speaking, pretty vague: a man on a horse, a plant, some people in a room, the corner of an empty room. They’re pointedly banal, and the conservative menswear palette—muted aquamarine, sepia, cream—is equally unexpressive, sober without being moody. The subjects exist in these paintings like the walls of a room: they need to be there, or you’d be standing outside, but just staring at them isn’t productive. It’s possible that the artist has a deep interest in boredom, but I suspect that the reductive, generalized images are there to function negatively: to prevent anyone from approaching the paintings either as abstract art—which would derail the entire program—or at the level of their iconography. Being unable to read von Plessen’s paintings, one is forced to look at how they’re put together, which is where the interest begins.

The eccentric specificity of von Plessen’s manner is inversely proportional to the banality of the subject matter. At first glance the paintings look like 1960s Bay Area figurations in which all the messy, expressive energy has been sublimated: a David Park or a Richard Diebenkorn that’s been through years of psychoanalysis. The artist builds each picture using a fixed set of techniques so orderly that one could draw up an index. There are straight, wide brushstrokes of thinned paint that reiterate the surface of the canvas and are overlapped to create some appealingly jarring color mixes. There are brushstrokes carrying thicker paint, also linear and of fixed width, that construct objects in the paintings like people’s heads and clothes. Most notably, there is the record of some kind of paint-moving device, like a squeegee or a plastic scraper, which both lays on thicker paint at critical points on the canvas and removes other marks, leaving a film of color and an accumulated glob of paint at the tail end of the gesture.

I’m sure it’s not quite so straightforward, but essentially von Plessen has a two-step approach to painting: you put the paint on with one tool, and then you manipulate or remove it with another. The scraping-off phase is essential to what these pictures are about, namely disrupting the way we look at a picture, and preventing the painting from operating independently of the conditions of its manufacture.

There’s a certain negativity in this, and one could take the stripped-down, flattened-out quality of von Plessen’s manner as an attempt to foreclose on any basic emotional relationship one could develop with the paintings. But there’s alienation as a deficit, and then there’s alienation as a device, and von Plessen’s strategy of detachment is employed in the service of a genuine desire to communicate with, not frustrate, the viewer. The paintings ask a lot, but they give back a thoughtful intimacy that’s worth the trouble.