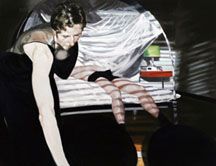 The most recent exhibition of Eric Fischl, virtuoso painter of suburban anomie, should make viewers question the status of painting. He suggests the possibility that an old-fashioned genre like painting could end up providing the perfect structure for the “total artwork,” Richard Wagner’s term for an overarching conglomerate of art forms, which he applied to theater (specifically opera). This would certainly be an odd position for painting, since the concept of the total artwork in the information age is more readily associated with more technologically advanced genres.

Fischl’s latest offering, Bedroom Scenes, which ran from March 5 to April 23 at the Mary Boone Gallery in Chelsea, consists of six large paintings of a couple in a fictional drama, the disjointed narrative of which includes undressing (perhaps from a fancy party), having sex, and getting dressed in the morning. The narrative of the paintings is loose—so that viewing the works does not consist only of piecing the story together—but strong enough to elicit dramatic interest. Perhaps the most interesting aspect of this show, however, is that the works were painted from photographs of actors posing on modernist furniture in a Mies van der Rohe house.

As a result of the paintings’ genesis, five art forms are implicated in the works: photography, architecture, acting, furniture design, and finally Fischl’s own art, painting. The way each of the different art forms enters into the paintings can be best explained as follows: First there is the building, the set for the paintings (and the photographs): Mies van der Rohe’s Haus Esters in Krefeld, Germany. This villa was designed by van der Rohe in 1928 for the silk magnate Josef Esters, but since 1981 the building has been used as an art museum. Second, there are the photographs taken by Fischl in 2002. Fischl placed appropriate modernist furniture in the museum and let two actors act out various scenes of household drama. Third, there are the actors who posed for Fischl’s photographs: a portly professional man, perhaps a banker, and an athletic, masculine woman. Fourth, there is the paradigmatic modernist furniture that populates the building. And finally, of course, there are Fischl’s paintings. The trajectories of these arts, their relationships with time, and their ability to represent the world are very diverse.

All of these art forms ask radically different types of questions. Normally, the edges of these five mediums would be sewn seamlessly together in the artwork. That is, only the painting would be seen. However, for this show that will not do. In Fischl’s paintings, each art form is covered over, but only partially. The implicit art forms are not completely hidden by the paint. We know that these other art forms are within the painting by way of extra-aesthetic information (concerning the actors, van der Rohe house, etc.) provided by the gallery. The function of the various art forms is to call attention to themselves: the show would have less impact if we didn’t know we were looking at one of van der Rohe’s houses, if we didn’t know we were looking at modernist furniture, and if we didn’t know we were looking at what was once a photograph.

Each art form asks its own questions of viewers (or urges viewers to ask them). Architecture asks the viewers: What would we do in this building? How would we live there? On the other hand, the art of acting is about motivation and intention. As such, the main question it foists upon the viewer is: Why are they acting this way? Furniture urges people to ask: How do we use that? Photography encourages viewers to ask factual questions such as: What happened? Who is this in the photograph? Is that a van der Rohe building? Painting finally pushes feeling, depth, and soul into the works. The audience might ask of a particular painting: What was the artist feeling when he painted that?

All of these questions, and their possible answers, come together in Fischl’s works. In a sense, then, they are total artworks, overarching conglomerations of art forms, and thus perhaps the ultimate art form. But of course the art forms’ questions (and any answers the artwork provides) are oddly juxtaposed to one another and do not culminate in an overarching aesthetic answer. And in this way, Fischl’s new paintings provide a remarkable model for the total artwork in our confused postmodern era.

Because many of his figures appear in settings with backyard swimming pools or the ocean, a range of blues dominates his works. Frequently, his subjects are more memorable than his technique.