The Asia Society and the Queens Museum 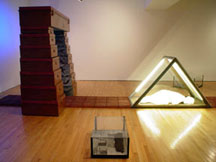 The first major exhibition of contemporary Indian art in the United States is currently taking place at the Asia Society and the Queens Museum. It is entitled Edge of Desire and is composed of five sections—Location/Longing, Unruly Visions, Transient Self, Contested Terrain, and Recycled Futures—each intended to address another aspect of Indian art and the changing culture that produces it. In addition, the Queens Museum hosts Fatal Love: South Asian American Art Now, which showcases America’s—mostly New York’s—counterpart to the 38 artists in Edge of Desire. The titles suggest something sensual, even erotic, but they’re meant to call attention to a tension in Indian society between strong, somewhat insular cultural tradition and rapid, volatile, political change.

One strain of tension makes itself felt in a pairing of Nilima Sheikh’s elegant hanging scrolls and Vasudha Thozhur’s oil paintings. In both cases, their Indian roots are clearly visible. Sheikh’s scrolls unfurl a pastoral of an idyllic Kashmiri landscape. Pieces of poetry pepper the painted surfaces in the company of romantic sketches of the rustic life. Thozhur’s imagery draws heavily on Hindu mythology. Thozhur inserts herself into traditional narratives in the guise of various gods. In one painting, she’s seen seated unperturbed on a funeral pyre with a personalized language of signs hanging unexplained over her head. Thozhur’s coloring in grays and blacks is foreboding.

Most interesting about this pairing are the artists’ respective attitudes toward tradition. While Sheikh’s vertically stacked spatial recession and flat modeling are clearly drawn from the tradition of Persian and early indigenous painting in India, Thozhur’s technique derives from the Western figurative tradition. There is a strong element of academicism in both artists in that they rely on the tropes of tradition to produce their images, rather than evolving a personalized style. This is an approach more acceptable historically in Asia than in Europe, but the breadth of difference between Sheikh’s and Thozhur’s traditions points to a total absence of ideologies governing style in Indian art.

Vivan Sundaram contributes a further twist of stylistic complexity in his installation entitled “Memorial.” It’s a tribute to the innocent victims of the riots surrounding the destruction of the Babri Mosque in 1992, an event that polarized religious and political communities in India and served to inaugurate the decade on which Edge of Desire focuses. Sundaram has evolved a sophisticated installation technique that belies familiarity with many of today’s most touted international artists. He handles space with the apparent ease of Robert Gober and the cool detachment of Michael Rovner. Sundaram deftly repeats the form of the fallen victim in plaster and in photography, encasing each behind a vitrine, a technique common to today’s Biennial art. In each photograph he stresses the figure with nails, stabbing them into its contour or piling them up to cover the crumpled form. It’s an apparent tribute to the victim and one of the most arresting gestures in the show.

It’s hard to square this installation’s panache with the naïveté of Ganga Devi Bhatt’s drawings a few rooms further along. A self-taught painter, she combines a personal narrative with an awareness of traditional Indian painting. The drawings are composed of simplified figures in bright colors. They are unprepossessing and personal in a way that Sundaram’s installation is not. Trying to move from appreciating the installation to appreciating the drawings is a substantial challenge. The former relies on contemporary sensibility, technical know-how, and political savvy for its strength, while the latter relies on sincerity and tradition. I find myself drawn to Bhatt’s work as something different from what I’m used to, then questioning that inclination as the bias of a westerner unwilling to ascribe aesthetic sophistication to a foreign culture.

Upstairs in Fatal Love, Rina Banerjee offers a convenient synthesis of the above mentioned poles. She has contributed a suspended chandelier of cellophane, scarabs, and awfully real looking little alligator heads. It’s just great and restores my faith that the genuine article might make itself felt in any cultural context. I’m out of my cultural dilemma just long enough to tumble back in—Banerjee’s an MFA from Yale with shows at MASS MoCA and the Whitney.

I write about the edge in my own painting as a way of situating myself in the world and figuring out how to receive it.