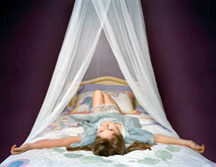 Political art, it goes without saying, is oppositional art. But the exhibition Left Behind, Angela Strassheim’s series of large-scale C-prints at Marvelli Gallery, deals with a hot-button topic, the Christian right, without attempting to reassure its likely audience of its own enlightenment. Instead, Strassheim’s solo debut offers a troubling, nuanced, and dispassionate view of the deeply human need to construct a belief system against the pitiless vagaries of life and death.

Strassheim comes from a born-again Christian family in Minnesota. According to the exhibition’s press release, the title Left Behind refers not only to the “unsaved” souls left behind after the Rapture has transported the faithful into heaven but also to “the memory and evidence people create that outlives them.” Portraits of the artist’s family are “juxtaposed with images of domestic narratives, inspired by childhood and adult life experiences.” The press release adds that Strassheim’s “obsessively careful compositions and lighting” were developed from her experience as a certified forensic photographer.

The images, all untitled, are resolutely open ended: a man combs a boy’s hair in a bathroom mirror; a young girl rests on a bed, gazing skyward, arms outstretched; another girl, with strawberry blond hair and a pretty pink dress, stands tiptoe on a windowsill, searching the outdoors for—what? The Rapture? A bespectacled granny lies in an über-pink coffin. Is she left behind, or is she saved? Is anyone portrayed here among the elect? And what of Strassheim’s cryptic reference to “the memory and evidence people create”—is it an accusation or a lament?

As in Ingmar Bergman’s film The Silence, we’re as likely to know the landscape of each other’s souls as we are to comprehend the mind of God. The photographs’ formal perfection—their clean, luminous color, meticulous detail, and relentless symmetry—belie the forbidden sensuality throbbing beneath their honeyed surfaces. The pictures of children are especially disturbing. They embody the tendency of the religious right to fetishize innocence, interpreting a child’s simplicity as the perfect spiritual state (“Except ye be converted, and become as little children, ye shall not enter into the kingdom of heaven”). But this adult/child convergence feels a hair’s breadth from the sexualization of childhood. In the photograph of the strawberry blonde looking out the window, her dress barely covers the curve of her buttocks, let alone her long downy legs. The girl reclining on the bed seems to be greeting an imaginary lover. And the man grooming the boy in the bathroom mirror seems frozen in the cold, hard light—or is the scrupulous symmetry of the composition locking down his desire? A roll of toilet paper in the corner (which wouldn’t be there, in light of the artist’s perfectionism, if not for a reason) seems to suggest that besmirchment’s just a swipe away.

Are we in the presence of a heroic resistance to temptation or a hypocritical stench? Whatever our bias, the fact remains that these people are the artist’s family, and it seems unlikely that she’d be able to enlist their participation without a mutual love and respect. Not to mention trust. In one viscerally distressing image, a pretty, demurely smiling young woman sits on a carpeted floor in a white satin slip, under which she’s tucked her hideously deformed feet. Yet there isn’t even a whiff of exploitation—in fact, what’s most striking about the photo is the woman’s self-possession and inner peace. Has her faith helped her surmount her disfigurement? We’ll never know; the picture’s untitled.

Strassheim’s use of symmetry appears to be a metaphor for the strict control her subjects exercise over their lives. This may feel repellent to freethinkers, but isn’t the beauty we find in symmetry derived from the comfort we take in its certitudes? And doesn’t the demolition of any dearly held article of faith—religious, political, social, or philosophical—have the potential to be psychologically devastating?

In a stark departure from the other images, Strassheim jettisons the symmetry that governs the series to drive home her most explicit point. A naked woman (nude would be too genteel) sprawls provocatively across an unmade bed, confronting the viewer with her dark patch of pubic hair and the grimy sole of her left foot. Her puke-flecked cheeks and an overturned pharmaceutical vial indicate suicide. The woman’s dirty foot (do we dare pun on soiled soul?) brings to mind Caravaggio’s filthy-footed worshippers in the Madonna of the Pilgrims, which so shocked the pious of its day. Just as the devotional classicism of the Quattrocento—undermined by rampant Church corruption and riven by the Reformation—gave way to Caravaggio’s borderline-heretical, savagely off-kilter canvases, this image signals the mental and spiritual shambles that remain after a rigid orthodoxy is splintered by the seams of doubt.

Full of wonders sacred and profane, the British Museum’s sweeping survey Tantra: Enlightenment to Revolution aims to reveal the history and tenets of a mysterious, transgressive spiritual tradition that has been intertwined with Hinduism and Buddhism for nearly a millennium and a half.