This project started as a way to document a pandemic. I wanted to narrow down the vastness of AIDS in Africa to one digestible chunk: a neighborhood. Though I have friends and loved ones there now, I was (am) an outsider, so I asked the people I was photographing to help me see what I was looking at. We used photography together, collaborating to make images that are neither through a foreigner’s eyes nor an Ethiopian’s but somehow through both.

These pictures were made with two adolescent girls in Addis Ababa whom I love. Both lost their parents when they were young. One has died. The other is still alive and, for the moment, HIV negative. 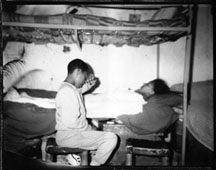 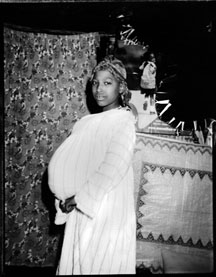 I Want to Have Two Kids

Ethiopian priest-healers write down the names of diseases in order to control them, to heal their sufferers. I have all kinds of names for her. Selam. Beti. Salamawit. Nefsua. Her given name is Ruth Alemu. She was four when she was begging on the streets with her mother, six when her mother got sick and died, seven when she announced she would change her name to Salamawit, nine when I met her. Her sister, Yamrot, and she were left to take care of each other. They had no place to go after their mother died in the hospital, so they stayed. The nurses took care of them, gave them pajamas. It was two years before my friend Yewoinshet found them and put them in a home with a foster mother, Hirut. Selam falls in love easily and she fell in love with Hirut. Three years later, when Selam was eleven, Hirut died suddenly. It’s as if everybody she loves is going to die.

When I met her, I gave her a camera and asked her to show me what her life had been like. She pushed the camera aside and pulled out a deck of cards. She dealt a game without explaining the rules and then cheated so she would win. She laughed until she was almost hyperventilating, her eyes squinting, her teeth shining. I couldn’t understand a thing she was saying.

For a while, she was the top in her class; to survive on the streets here, you have to be smart. After Hirut died, Selam started slipping. She would lie about going to school. I saw her at the Orthodox Timket ceremony celebrating the baptism of Jesus. Selam, now thirteen, had six ten- and eleven-year-old boys following her around. Perhaps she felt comfortable around them because they knew the streets, or because she thought they, like her, were too young to die. 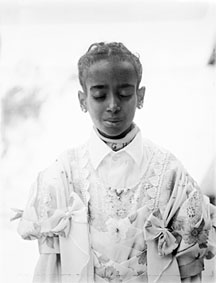 Eventually, she wanted to make pictures with me.  I taught all six of the children in her home how to use the camera but Selam was always the one who would ask for more film every time I went to visit, which was more and more often. I learned the rules to her game and we would try to cheat each other every time we played. She decided she wanted me to make photographs of her as a fictional character named Beti. Beti and Selam were similar: both watched their mothers die of AIDS, both resorted to begging on the streets, both may or may not have been raped, both found friends with similar problems. Beti went on to be a productive member of her community, helping others who suffered fates similar to her mother’s. Selam ran away from home soon after we stopped photographing.

Selam left her sister Yamrot a phone number and said she would be working as a maid for some ferenji, foreigners. She packed up a few clothes, including a sweatsuit my mother had sent her, and she left. Yamrot waited a few days and called the number. The woman who answered said there were no ferenji there. She said she had never heard of Selam. A few weeks ago, two boys saw her working in a brothel.

Tenanesh (meaning “She is my health”)
She asked me to take her on dates to fancy hotels.

She took an hour to eat a fish.

She flirted with waitresses.

She impersonated old ladies for laughs.


She lost her mother before she could speak.

She left marks on my wife’s arms.

She made me a bracelet.

She sweated and cried.

She commanded her older sister to make her food.

She respected her elders.

She spoke slowly so I could understand her.

She spoke to thousands.

She walked confidently in high heels.

She looked around all the time.

She played with my cat.

She wanted to play with other children at school.

She wanted to take naps on a bed of pillows that I made for her.

She sat under a tree.

She broke out in rashes.

She called me at work.

She begged for a refrigerator.

She berated me for my absences.

She listened to Celine Dion.

She wept in her grandmother’s lap.

She rode the blue taxis exclusively.

She could not afford her prescription.

She asked only for holy water. 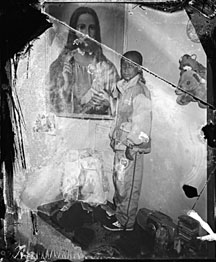 I Am Just a Kid

Tenanesh Kifyalew and I made these pictures together in her home in Addis Ababa, Ethiopia during the six months before she died of AIDS. Her doctor had prescribed ARVs but she could not afford them. At the time, many doctors estimated that less than five hundred of the estimated 3,000,000 Ethiopians with HIV were receiving advanced drugs.

Tenanesh was confined to her grandmother’s one-room house by the time I met her. Her house became our studio.

Innu people have always been involved in fighting to protect the land, and this project was a way for me to showcase the beauty the land has.