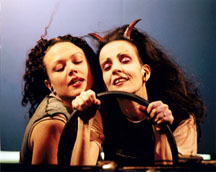 It’s tempting to declare a Faustian zeitgeist. With two productions from two of New York’s most interesting experimental theater companies dealing with the infamous scholar-magician (an historical figure contemporary with Luther), one can’t help but wonder if there is something about the present moment that sends us to the mirror. “Have we sold our souls?” some might ask. “Are we too lost for redemption?” Well, maybe, but that doesn’t seem to be a concern for either the Wooster Group or Target Margin. Intellectual ambition and spiritual daring may be what we associate with the Faust myth. But in these current riffs, it’s more about sex than sin.

The Wooster Group’s House/Lights has been a work-in-progress since the summer of 1996. After touring widely, the ’98-’99 run at the Performing Garage was one of the theatrical highlights of the New York 90s, a dazzling visual and aural onslaught that “channels” Gertrude Stein’s 1938 libretto, Doctor Faustus Lights the Lights. In Stein’s version, Faustus sells his soul for electric light, only to become bored when the innovation reaches ubiquity. He saves the character Marguerite Ida and Helena Annabel (we can call her MIHA) from a viper bite, and she becomes a celebrity. The play ends with Faustus unable to seduce her into accompanying him into Hell.

Working with Stein’s “stream of language,” the Wooster Group’s approach allows that stream to overflow. Of course, their style has never been one of subservience to text. Always too postmodern to privilege “high” modernism at the expense of the “low,” here they juxtapose the Stein libretto with Joseph Mawra’s 1964 sexploitation B-film Olga’s House of Shame, the story of young Elaine, who is captured by the sadistic lesbian jewel thief Olga and her equally lecherous and seedy brother Nick. Elaine attempts to escape but eventually loses herself in the sexual excesses of Olga’s world. 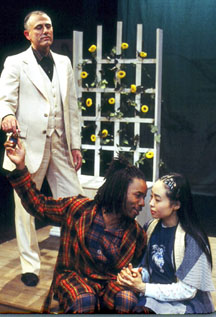 With their penchant for reviving and revising, it isn’t such a surprise that the Wooster Group would take another look at House/Lights, and with To You, the Birdie! (Phedre) and Brace Up! having played at the spacious St. Ann’s Warehouse in 2002 and ’03 (respectively), the choice to bring the show to Brooklyn is likewise no shocker. Still, the question can’t be avoided: in a different house, can it be the same Lights?

The answer is a mix of yes and no. The entire cast returns. Kate Valk is every bit as captivating as Faustus/Elaine, Suzzy Roche is once more like a set of exhausted lungs enduring a smoker’s hangover as Mephistopheles/Olga, Roy Faudree is still as sleazy as an oil rig as Boy/Nick, Ari Fliakos jumps and says, “thank you” as the Dog/Johnny with the same frenetic energy, and Tanya Selvaratnam still sits at her Powerbook downstage right like someone bored with downloading soft-porn but too addicted to stop.

Now, as then, an excerpt from Stein’s essay “Plays” is included in the program, where she observes: “your emotion as a member of the audience is never going on at the same time as the action of the play.” For Stein, this incongruity between staged action and the emotions of the spectator/s is “what makes one endlessly troubled about a play, because not only is there a thing to know as to why this is so but also there is a thing to know why perhaps it does not need to be so.” In the program back in ’98-’99, Valk was given an additional credit as “dramaturg”—a reference not to any conventional dramaturgical off-stage activities, but to the way she delivered the bulk of Stein’s text as if she was a medium. That credit no longer exists, which might actually point towards the major difference with this remounting of House/Lights. As per Stein’s concern, I was trapped; comparing the show to the times I saw it before. Part of the fun with the Wooster Group’s works-in-progress approach is the possibility of seeing something new, but with this run, I experienced the disappointment of not seeing anything new and missing what was remembered.

The Stein text, while still delivered, seems overwhelmed by Olga’s House of Shame. In earlier incarnations, the line between one text and another was not clearly delineated. Even the lines are delivered with a distinct difference: a synthesized Betty Boop voice for the Stein, set against the regular voice for the Mawra, in addition to the narrator’s voice from the film. Previously, various theatrical images could be seen on the monitors—such as dance routines from Chinese opera, mimicked by the live performers. While those images remain in the aggressive choreography, the Mawra film now dominates the screens to such a degree that it overwhelms the stage. The result may be “clearer,” but the ultimate effect is that the juxtaposition between the high and low culture texts is diminished. Stein’s material is reduced to verbal decoration, subsumed by the hyper-kinetic stage activity and the Mawra film, and the struggles of Faustus’ and MIHA’s souls (what can be gleaned from it) become just as silly as Elaine’s plight to escape Olga and her subsequent descent into the world of S&M. Bereft of its ontological blasphemy, the spectacle is just playfully kinky.

Of course, there isn’t any loss of technical excellence, nor is any of the humor absent. The Group still “channel” Lights, but the remote clicks on House with greater emphasis. This makes for a much more broadly funny show (the audience laughter is now not only more frequent, but also more unified), yet some of the magic—the soul of Faustus?—is lost.

Target Margin’s Faust in Love (Faust 1.2), the second installment in their three-year, three-part adaptation of Goethe’s Faust, shows much greater fidelity to the text. So much so, that the overall ambition for their project is to stage the entire 12,000-plus lines of Goethe’s epic drama, translated by Douglas Langworthy. Picking up literally from the last line of their 2004 production, These Very Serious Jokes (Faust 1.1), we naturally miss all of Goethe’s lengthy exposition, but with Faust in Love we’re served up the most celebrated part of the work—the scholar-magician’s love for the poor seamstress, Margaret or Gretchen (Goethe uses both names for her).

Working with the most well-known segment of the single most classic work of German literature and theater, the expectations for director David Herskovits and his gifted cast are high. But the initial results are deeply disappointing. Despite the actors’ effective handling of the verse, the staging falls far short of the text’s demands. While George Hannah brings the intelligence and sense of wonder necessary for Faust, and Eunice Wong’s Gretchen is appropriately simple and naïve, watching the seduction is a bore. David Greenspan’s Mephisto slithers and struts his way through the piece with far too much reliance upon his already well-established on- and off-stage celebrity. What’s funny about his seduction of the widow Martha (Nicole Halmos) isn’t so much that it is the Devil she’s screwing, but that it is Greenspan.

The actors aren’t helped by the set or the sound. The small white bench adorned with yellow plastic flowers (used to convey a garden setting) looks cheap, while the sound is too small for the space. Director Herskovits must take much of the blame, especially for the tedious device of ending scenes with the first line from the next scene, repeated as the next scene begins.

And then suddenly, about three-quarters of the way through the play, it all changes. As if by magic, Faust in Love is rescued from its doldrums with the murder of Gretchen’s brother, Valentine (Wayne Alon Scott). With his dying words (cursing Gretchen’s sexuality) still ringing in her ears, the depth of the space at the Ohio Theatre opens to reveal Gretchen in a cathedral, surrounded by the sounds of Latin Mass, haunted by an evil spirit. The set and sound design problems disappear in an instant with baroque majesty.

Swept away from the scene of the homicide by Mephisto, Faust finds himself in an ecstatic realm of sinister delights, a la Hieronymus Bosch. Although the production doesn’t quite clarify where they are (seemingly a helluva case for going to Hell, but in Goethe’s text simply a witches’ coven in the Harz mountains), the Walpurgis Night and Walpurgis Night’s Dream scenes are remarkable, a delicious staging of orgiastic perversity, like a psychedelic hallucination spun wildly and dangerously, but thrillingly, out of control. Here Greenspan’s Mephisto finally becomes truly devilish, as he initiates Faust into the mysteries of excess and debauchery.

Literary critics have often questioned Goethe’s logic with these strangely obscene proto-surrealist scenes, but in this production, they are the redemption and seem necessary to reach the requisite intensity of arguably the most powerful scene in all of German (if not world) drama, in which Faust attempts to rescue Gretchen from a dungeon before her execution. Wong’s Gretchen conveys the overwhelmed madness of one who’s been made a devil’s plaything, desperate for her lover, her lost child, her lost innocence. When Hannah’s Faust leaves her to her fate and departs with Mephisto, the pathos is rich and overwhelming.

To reach this tragic beauty is well worth enduring the bland sterility of the first three-quarters of the production. While it is hoped that there might be remedies for this depiction of Faust and Gretchen’s falling in love, the finale quarter of Faust in Love suggests that Target Margin might well perform wonders with the bizarre, much less popular second part of Faust.

Both the Wooster Group and Target Margin deserve praise for the high reaching ambition of their productions. It is a loss to both that Mephistopheles is far more fun than frightening. And yet, with radically different aesthetics and aims, House/Lights and Faust in Love emphasize and revel in the erotics of the Faust myth. Perhaps that’s all the magic we need.

Luther Hampton (b. 1942) grew up in the heart of his native South Memphis, a Black neighborhood well-known for its cultural contributions to the history of the city, such as the famous soul music label, Stax Records.