The Music of Geraldo Gandini 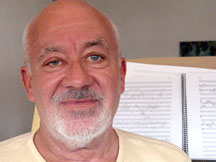 It is unforgivable that Gerardo Gandini, the most famous modern composer and pianist in Argentina, is virtually unknown here. He has won a Latin Grammy, a Guggenheim, and awards from the Italian, Argentinian, and French governments, and he has written over a hundred influential compositions. A member of Astor Piazzolla’s final sextet, he recently participated in a star-studded concert tribute to the master in Buenos Aires.

Before Piazzolla died in 1992, he called Gandini from his sickbed, asking him to collaborate on a new improvisation for tango. Gandini replied “Mirá, but I never touched tango,” and Piazzolla said he didn’t care. After diving into the “dirt” of the genre, culled from the bordellos of Buenos Aires, he was startled that Postangos en Vivo en Rosario, an ultramodernist spin on traditional tango, won a 2004 Latin Grammy. “I was very surprised,” Gandini told me. “I thought it was not a music to win a Grammy. It reaches out to a certain subsection of the contemporary audience of Buenos Aires. It is not a tango audience but more like that of the Kronos Quartet.” Gandini is no stranger to New York, having worked with the American Opera at the Juilliard School while being funded by a Ford Foundation grant back in the l960s. When I visited him in his suburban Buenos Aires apartment, he aptly suggested his neighborhood was “just like Brooklyn Heights.” After I’d explained what the Brooklyn Rail was to him, he noted it must be “just like the old Village Voice.”

It is important to note that before 1930 there wasn’t any new music in Latin America, just fusty, rousing nationalistic ballads. Then the Mexican Carlos Chávez, residing in New York during the 1940s, bravely infiltrated the international avant-garde. His friends included Varèse and Copland. John Cage asked him to compose Toccata for Percussion (never performed), and he wrote The Daughter of Colchis, based on the myth of Medea, for dance doyenne Martha Graham, who renamed it Dark Meadow and premiered it in 1946 with sets designed by Isamu Noguchi. That cracked open the modernist door for the southern hemisphere, along with the Grupo Renovacion in Argentina, featuring the composer Juan Carlos Paz (1901–1972), whose mandate was to transform “art music.” But it was not until the 1960s, when Latin American composers went abroad en masse, that the scene really flourished. The Organization of American States sponsored nine Inter-American Music Festivals from 1958 to 1978, with over a hundred premieres of Latin American music. One of those affected was Gandini, who helped establish the Agrupación Musica Viva “with the aim of promoting the study and performance of contemporary music.” “Buenos Aires,” he said, “is a little different from Latin America. It looks European…it is more cosmopolitan.”

He should know: He was a lecturer and professor at the Centro Latinoamericano de Altos Estudios Musicales (CLAEM) at the legendary Di Tella Institute in Buenos Aires, from its inception in 1963 to its closing in 1972. Di Tella was a seminal place where young composers from Latin America, surrounded by a community of like-minded peers, were tutored by teachers from around the world on the most contemporary musical issues. These composers mixed the best influences of modern music with their continent’s unique style. In Latin America these stylistic differences concern a piece’s sense of time, usually shorter, making the sonority thicker and more concentrated. Basic musical elements are repeated more than in strictly European compositions, a device rooted in indigenous cultures, but the repetitive elements take a modernist tack designed to disturb, not lull. Silence is cleverly deployed not for its ability to negate but as an affirmation colored by a tinge of austerity.

Since 1990 Gandini has directed the Experimentation Center in opera and ballet of the Colón Theater in Buenos Aires. There, in 1992, he took the unbelievably brave step of premiering a chamber opera, La Casa Sin Sosiego (The House Without Tranquility), an allegorical opera dealing with the still-fresh memories of kidnapping, torturing, and disappearances of thousands during the period of Argentina’s brutal dictatorship. In the opera the country has become a living hell, and Orpheus is unable to rest until he finds out the truth about the dead and disappeared. (In previous years, an allegory like that would have resulted in Gandini’s own disappearance.) In 1995 he showcased La Ciudad Ausente (The Absent City), based on the novel by Argentine author Ricardo Piglia, who also wrote the libretto. The opera examines the relationship between three women: a bird woman, a poet’s wife who morphs into a singing machine, and Lucia Joyce, the deranged daughter of the Irish writer James Joyce. Lucia is trapped in a psychiatric hospital as a patient of Dr. C. C. Jung.

Gandini graciously played me one of his first piano recordings from 1969, redolent of Schoenberg, Stockhausen, Boulez, and Cage. The piece makes use of the objet trouvé — found material that he first deconstructs and then reconstructs. I also heard his recent Fourth Sonata for Piano. Its emphasis was on the pauses between notes and the subtle but lingering effects of the fading sonority of each microtone. His compositions first seduce, then compel the listener into reflecting on the immense sadness of the human condition.

But Gandini is not all Sturm und Drang. In 2004 a new CD collaboration with the best jazz orchestra in Europe, NRW Jazz of Essen, was released. Titled Tango y Postango, it advanced the genre of the Tango Nuevo by combining classical, jazz, and indigenous art forms in a contemporary mélange to explore the capabilities of jazz in a razzmatazz extravaganza.

Nicolás Guagnini’s exhibition Asociación Psicoanalítica Argentina at Bortolami was a twisted riddle, a psychoanalytical conundrum. Supplemented by a performance titled Analysis, the show was dense with signs and possible signifiers that warped interpretative norms.

Brendon Randall-Myers is a composer and electric guitarist with a multifaceted musical history—from conducting the Glenn Branca Ensemble to performing Bach. His new album, dynamics of vanishing bodies (New Focus Recordings), written for the electric guitar quartet Dither, focuses on the use of psychoacoustic effects to explore the sensations of place and memory.

Guillermo Filice Castro is the author of the chapbooks Mixtape for a War and Agua, Fuego. An immigrant from Argentina, he now resides in New Jersey with his partner and two cats, Cleopatra and Evita.