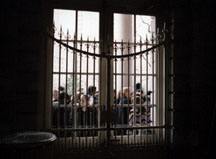 People waiting to get inside to the hearing on Brooklyn’s developmental future, April 4, 2005. Photograph by Brian Molyneaux.

Nothing says “You’re a winner!” like a giant check. Greeting readers on the back page of the March 26 issue of the Brooklyn Papers is a full-page, full-color ad from Forest City Ratner, touting their recent deposit of $1 million into Carver Federal Savings Bank, a tenant at FCR’s Atlantic Terminal. Bruce Ratner is buttressed by none other than his negotiating partners in the perpetually “three weeks away” community benefits agreement (CBA): Bertha Lewis of ACORN, the Reverend Herbert Daughtry, and James Caldwell of BUILD. Who needs Ed McMahon charging up a suburban American driveway when Brooklyn has its very own bringer of good cheer in the developer?

Cocky and confident would be the best way to describe supporters of the arena and the seventeen-skyscraper sweetheart deal that is Forest City’s Atlantic Yards this past month. Giant checks aside, it is likely that after months of accusations that the pro-Ratner groups amounted to little more than paid shills for the project, the peacocks can finally fly their plumage. The reason: FCR has turned their public relations runabout into a real-as-quicksand proposal with the issuance of a Memorandum of Understanding (MOU). This document, which is not an official approval of the project, nonetheless sets in motion the process that Forest City must undertake to gain such approval.

The MOU has upped the ante for groups in opposition to the project. As City Councilwoman Letitia James, who recently announced her bid for reelection this fall, characterizes it, “I think it is a land grab. It is fleecing of taxpayers and corporate welfare at its worst.” She notes that the manner in which Forest City has chosen to pursue the project takes oversight of the approval process away from the people via the city council and puts it in the hands of “three men in a room” at the state capitol.

It is the details of this document, or lack thereof, that heighten the concerns neighbors have about supporters’ claims that they are “at the table” with the developer. Daniel Goldstein of Develop Don’t Destroy Brooklyn, an opponent of the arena whose home is threatened by the project, notes, “The MOU leaves out language that groups like BUILD are seeking.” Despite this, supporters such as BUILD, ACORN, and Rev. Daughtry don’t seem concerned that Forest City’s promises will remain unfulfilled.

The MOU, a nonbinding agreement between the developer and the city and state, details pledges by the city and state of $100 million a pop for infrastructure improvement on the site plan. In addition, it spells out a host of subsidies that Forest City Ratner would receive from the Empire State Development Corporation (ESDC) for embarking on the venture.

The terms of the lease grant full property tax exemptions to FCR, with the understanding that the company will instead pay off bonds issued for the development with these PILOTS (Payments in Lieu of Taxes). Forest City will potentially be granted exemptions, via the ESDC’s “statutory powers,” from city and state mortgage recording taxes and sales taxes. ESDC will also be calling for energy cost savings for the project from Con Edison.

Atop all of these breaks and subsidies, Forest City will be able to use city capital funding for the actual acquisition of property. The city will fund eminent domain procedures and will convey the property to the ESDC, who will in turn enter into a 99-year lease of the property to Forest City Ratner for $1.

What this all effectively means is that much of the supposed benefit that this development is touted to accrue in terms of tax revenue to the city will not in fact be realized. Also, although stated direct infrastructure contributions from the city and state amount to $200 million, Develop Don’t Destroy’s Goldstein believes that direct and indirect “subsidies will reach close to $1 billion.” Given open-ended commitments by the government, coupled with Forest City’s vague figures, Goldstein notes, “It is difficult to tell how much the project will end up costing taxpayers.”

Disturbing in the MOU is the promised-jobs number. For months, BUILD has parroted the Ratner line that there would be 10,000 permanent jobs created at the Atlantic Yards, and the group has been adamant that this number will be enforceable by the CBA. Yet the MOU only mentions 8,500. It is odd that Ratner would lowball a jobs figure in an unenforceable MOU while still committing to a higher number in a “legally binding agreement.” When presented with this quandary, BUILD’s Caldwell seemed only slightly concerned. Although he couldn’t explain the discrepancy, he “believes that even though the [MOU] number is 8,500, we are still working with 10,000.” He planned on discussing the issue with FCR.

The MOU states, “with respect to any residential rental units to be developed in accordance with the Development Plan, it is the intention of the parties to work together to ensure that a reasonable number of units will be developed as affordable” (emphasis added). If “reasonable” conforms to precedent, an 80% market rate, 20% nontiered affordable housing model would prevail. This would undermine supporter ACORN’s “unprecedented” affordable housing plan for the Atlantic Yards.

Bertha Lewis is insistent that the much-touted 50% affordable housing model is still in play. “The 50/50 agreement was made with us [and Forest City Ratner] as a way of doing this.” But, she concedes, “there are a lot of unknowns [such as] how much [Forest City] has to pay the MTA.” She also feels that the ultimate hurdle will be whether New York City’s Department of Housing Preservation and Development (HPD) “will make it easy or hard for us to do 50/50.” She mentions that Ratner has taken a lot of flak from unnamed members of “the development community” for his willingness to work within ACORN’s more progressive housing model, and implied a political pressure placed on the HPD by them. It is these outside elements Lewis would preemptively blame, should the promised affordable structure not come to pass.

Daniel Goldstein has other serious concerns about the memorandum. “A key thing about the MOU,” he points out, “is that the MTA is not part of it.” The MTA, being the landowner of the yards, will be an integral part of the decision-making process. The authority did issue a seven-page document addressing the MOU in which they acknowledge that “nothing in [the MOU] shall obligate MTA to sell or lease” property and they may have a “competitive process, including, without limitation, competitive bidding” for air rights to the yards. This would allow other bids to be considered from proposals such as the UNITY plan. Goldstein is concerned that one paragraph in a seven-page document is not sufficient notice for a true open-bid process, but he believes offers could come as “developers are heartened by the idea that they can have a successful bid despite the opposition from the mayor and the governor,” as has happened with the Manhattan Hudson Yards bids. The MTA was unavailable for comment.

The remainder of the letter details the various costs the MTA would expect the developer to assume regarding moving the rail yards and maintaining acceptable service for the Long Island Railroad during construction.

Both Lewis and Caldwell mention that they plan on pushing for the incorporation of the CBA into the eventual development agreement, which would make its terms enforceable by the city and state as opposed to a simple contractual agreement that could be litigated only by the signatory parties. It is difficult to surmise what recourse the negotiators would have if FCR simply said “no” to this suggestion. Regardless, when the CBA eventually does arrive, James Caldwell is convinced that “a lot of people will be excited,” and assures Brooklynites that “it will be a part of history.”

As a counterpoint to this assertion, Goldstein notes that at a recent meeting with Borough President Marty Markowitz, where Goldstein estimates “over 30” community groups were represented, it was asked if anyone in the room was involved in the CBA negotiations, and no one was.

As to when the CBA will arrive, Caldwell had mentioned “three weeks” in early March. As April arrived, he revised this erroneous assessment to “probably a month away.” Bertha Lewis believes a “draft” should be expected sometime this month but cautions that “this CBA will probably go through three or four different drafts.”

Sincere in their intentions or not, community groups in support of the project do not negotiate from a position of strength when they are concerned with appearing in the developer’s PR photo ops while their community benefits agreement lags far behind the development’s approval process. They do not engender credibility when they shout down those who stand to lose their homes at community meetings while the job and affordable-housing numbers upon which they base their support seem to be slipping away. Will their alignment with Bruce Ratner amount to anything more than the reflected glow of a giant check?

Daniel Goldstein notes that Develop Don’t Destroy is gearing up to “give input to the [upcoming] environmental impact study: challenge [it] if necessary.” He also mentions they are “anxious to hear what the Supreme Court decides” regarding the Kelo v. New London eminent domain case, which could put a serious wrench in Ratner’s works.

Regardless, Councilwoman James, noting that the decision-making process has circumvented City Council oversight, urges constituents concerned about the project to contact Democrats in the State Assembly and Republicans in the State Senate and demand a proper say by the residents of Brooklyn about the fate of the Yards.

LIT Council: Men of Color Called to the Stage

The pen, the page, and the journey of the artist's imagination. This October, LIT Council launches its second season as The Tank’s in-house development intensive for new plays. What makes this group stand out? Founded by Akin Salawu and co-created by Beto O’Byrne and Jerome A. Parker, the group is exclusively for male Playwrights of Color.

As 20,000 copies of this issue in print hit the streets of Manhattan, Brooklyn, and Queens along with 10 to 20,000 daily online readers, just five days before Midterm elections, we hope our freedom of speech is not a compensation for our freedom of thought.

The show is dominated by artists associated with what became known as the Washington Color School, including Kenneth Noland, Howard Mehring, Thomas Downing, and Gene Davis, whose careers benefitted from Clement Greenberg’s notion of “post-painterly abstraction.”