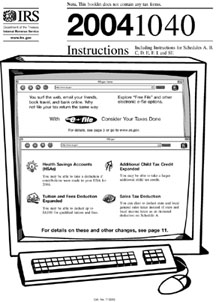 0) I decide to do my taxes myself this year, to save money, and be less ignorant about them. And I still owe my accountant for doing last year’s taxes.

2) I find the forms, but I need a newer version of Acrobat Reader to download them.

3) I hit a window to download new Acrobat. I find out that Acrobat costs $300.00, more than my accountant would. I e-mail a friend who is more computer savvy than I about that. She sends me a link where you can download Acrobat for free.

6) I get a blank screen, and the mouse pointer locks up as a weird icon. Yesterday, the website showed me the form, but wouldn’t let me download it, because of the Acrobat issue.

8) The next morning: I try again to download the 1040 forms. I get the blank screen, and the mouse pointer locks up as a weird icon, again. This time I notice there is an error message on that page, so for once it’s not me.

9) I look up one of the other forms I need, and find it on the menu. This one opens. I try to download it.

10) A window opens telling me I need a more current Acrobat to download this file.

11) I go to desktop and dump the old Acrobat icon in the trash, thinking it’s in the way somehow.

12) I return to form page and try to download. The window tells me I need newer Acrobat to download—digs up old Acrobat window again.

13) I try to find new Acrobat reader I downloaded on the computer, thinking I’ll put it on the desktop, and maybe the forms page will then recognize it. I can’t find it.

16) I find other form I need on the menu, and try to download it. The computer brings up old Acrobat again.

17) I go to Apple help screen—can’t find instructions as to where the new Acrobat is, neither of the two I now have.

18) I call information to get Apple tech support, because I can’t find a number on the computer.

20) I walk over to Soho to find Apple store where I heard they will give you free tutorial and/or help. I can’t find the store; I should have called. I walk back home.

21) There’s an e-mail from my friend who says I should go to the post office and pick up the forms. I think to call the post office and ask, but decide I could use the walk though it’s snowing like mad, and it’s close by. I vaguely remember trying this years ago, and failing, but go anyway.

22) I go to the post office. They say to go online to get the forms. I walk back home.

23) I look in the yellow pages to find the number for the Apple store in NYC to get tech support to find out why the new Acrobat reader won’t work.

24) A recording says they only do service if you bring your computer in, or will only do diagnostic work for a fee. And they’re not open yet, anyway, so I can’t talk to a person.

27) I call the IRS numbers—can’t get a person, even at the number where they say you’ll get a friendly person to help you. The friendly recording at that number tells me to go online to get forms, or you can have them faxed to you.

28) I call the # that says you can have them faxed to you, but you have to call from the fax # you will use, and I don’t have a fax machine. I was going to use the fax at my copy shop around the corner.

29) I consider going to the IRS office downtown, but can’t get a person to talk to on the phone; I want some assurance that if I go down there, they will in fact have the forms. Stumped.

30) I think to call my savvy computer friend to ask about the Acrobat issue. But, she lives in the West, and wouldn’t be awake yet. And she doesn’t use Mac, so probably wouldn’t be able to help anyway. I think to call my ex-girlfriend Liz who gave me this Mac, but can’t because she requested three months of no contact to figure out what she wants to do about the relationship, so we aren’t speaking, and I wouldn’t accept help from her because I’m angry at her for dumping me, and we were never friends anyway, though I thought we were, but she informed me that I was wrong about that. Anyway, that relationship is over, except in my head, where it burns.

31) I think to wait for Apple tech support to open in California, but figure it was either destroyed in the recent mudslides there, or they’re all out digging their friends out of the mud.

32) I call the IRS again—I get the recording giving locations, and which tells me to stay on the line if I need help preparing my taxes and I make $36,000 or less. I make more than that. It also says that if I would like to request an appointment with a person to help me, I should leave my number, and they’ll call me back in two business days. I listen to other prerecorded tax topics, none of which are suited to me. The recording directs me to number where I can speak to a “friendly, knowledgeable assistant,” again. That number is 800 829 “1040.” They’re funny. I call that number. I get a recording that gives you options, none of which I need. I try to press a number to go anywhere at all, but my hands are shaking so I hit the wrong button, and a recording says they don’t recognize that option. I try again, and succeed, but there is no person. I pick another option I don’t need – the one that asks if I don’t know what forms I need, press 2 – but I do know what forms I need, they’re sitting in front of me from last year. I consider copying them and whiting out the year, and using them. I discard that option—I’d probably get audited. I press 2. I get a static-filled recording of indiscernible music for a while. A man comes on and tells me his name, and some number that apparently applies to him, both of which I forget immediately. I ask how I can get forms. He says; “There was a delay in processing the forms this year because of legislation;” which legislation he doesn’t describe, and I don’t ask. But he says that now they “should” be available. I give him my area code to find out where I could physically pick them up. He gives me the address of the downtown office of the IRS, which I already have. I say that I’ve been calling them to find out if they will in fact have the forms before I go down there. He says; “They should have them by now, because, you know, it’s March.” I ask if there’s anywhere else I can get them. He says; “If there’s a library in your area, they should have the forms.” I hadn’t thought of that.

36) I go to the library. They have some of the forms, but not all. I flag down a librarian. He goes online and prints out some of the forms I need, but not all. He’s nice, and helpful, to me, though yesterday he was mean to another librarian because she loaned a magic marker to a patron: “We don’t loan out materials,” he hissed at her, embarrassing her in front of me, and the person to whom she just handed a magic marker. “Ohh, yeah,” she says. “I forgot.” The patron walked off with the marker anyway. She, the librarian, didn’t seem embarrassed or angry the way I would be. Today, he directs me to another librarian, who prints out the rest of the forms I need. I wonder why the first librarian can do some forms, but not others, but I don’t ask, because I don’t want him to get snitty with me. “Don’t you have a computer?” he says. “Yes,” I say. “But, it’s broken.” “Mmm...okay,” he says, a little snittily, now. I wonder if they will charge me for this service, but they don’t.

37) I now have all the forms, but I don’t have extra copies of the ones they printed out. I will need to go to my copy shop and print extra copies, since I’m sure to screw up many times. I could copy them there at the library, but don’t think of that, because I’m in a big hurry to go no where, because I’ve been laid off.

37) I was in this library yesterday to get movies, but I didn’t think about tax forms then, because I was obsessing about being dumped, and being in debt. And I didn’t have my old taxes with me to know which forms I needed anyway. And it was an impulse to go to the library to get movies because they’re free there, and I’m anxious that I don’t have enough money saved to pay my taxes, which, judging by my fearful glances at last year’s forms, is true.