The Higher Horror of the Blankness

Even with the most scathing dismissal from every mainstream publication, Constantine continues to rake in the dollars, week after week. David Denby so ran out of pejoratives in The New Yorker that in the end he was reduced to lamenting that Catholic religious imagery was being tragically plundered for superficial purposes. Has he never seen a horror film?

And Constantine is, so far as my expertise extends, way Catholic—its hell and notions of sin seem to suggest that all sinners will be subject to the Catholic paradigm, like it or not. Anything governing heaven and hell not expressed in orthodox Catholicism is explained with a breezy mumbo-jumbo; it seems there are rules and that if demons disobey these rules, then—well, no one really cares, do they? Constantine’s got sufficient mojo to make demons do something they don’t like (go back to Hell), and how he does it don’t matter. He’s got tools introduced with great fanfare—beetles, dragon’s breath, etc.—that he never seems to use. He’s got two sidekicks: one dumb enough to work at his cluttered desk with his back to the door and the other a hip-hop nerd who turns out to be a secret genius—a sop to nerds in the audience worldwide.

Keanu’s also got mojo sufficient to converse with the angel Gabriel about whether he really does have to burn after he dies. Turns out Constantine lives only to buy his way into heaven by the number of demons he sends back to hell. While that may constitute a mighty symmetrical view of good ’n evil, it provides a surprisingly engaging entrée into Constantine the character. Who couldn’t root for a guy with that agenda? And the driving concept—that once you see the Demons Who Walk Among Us they also see you—has fueled far stupider and less expensively executed pictures than this.

The most arresting moments are Constantine’s conversations with the angel Gabriel; they incarnate the appeal of Constantine for those not vested in the comic from which it’s adapted. And those vested in the comic seem to be complaining about the adaptation anyway. That appeal is the hypnotizing cinematic lure of blankness. And nobody’s blanker than Keanu Reeves.

He’s a Warholian figure: not a flicker of internal self seems to cross his features. Nor does any recognizable human emotion. As he ages, his one attempt at “acting”—that contemptuous half-sneer suggesting his disgust with the human condition that’s been his default move since Point Break—grows curiously more convincing. In 10 years or so, Keanu’s going to make an immortal film noir hero. Perpetually playing jaded seekers should leave him jaded enough to finally own the perpetually adolescent mock-jadedness he wears like his black suits and that plastic hair.

The Gabriel scenes are fascinating because they offer a perfect distillation of the two key opposing genres of cinematic blankness. The Greta Garbo Blankness—suggestive of profound, never-uttered insights, poetic, internal, never-uttered pain, and a fiery sexuality just waiting to be unleashed by one with matching profundity—has seldom found as arresting a form as Tilda Swinton. Like Keanu, there’s no telling what she’s thinking or feeling. In opposition to Keanu, however, she’s clearly thinking and feeling something, and far more deeply than you ever will. Moreover, Tilda possesses a singular upper-class comfort/grace before the camera—check out her freakish lack of self-consciousness in her, uh, love scenes with Ewan McGregor in Young Adam. Keanu showcases the Clark Gable Blankness—masculine heartiness without all that annoying front-brain processing. Gable, though, seemed to be solidly in and to enjoy his own body. Keanu treats his as he does the camera—with discomfort and veiled contempt. He moves with a mummy-like stiffness that is perfectly aligned to the stiffness of his performance. Yet, like Tilda, the camera loves him, and he is undeniably a Movie Star.

The two of them in the same frame is hypnotizing and worth the price of admission. Tilda’s enormous Martian eyes, Keanu’s rail-splitting chin—and both are a costume designer’s dream. Tilda wears her English bespoke tailoring and (apparent) Jean-Paul Gaultier as unselfconsciously as she wears nothing (sadly, she never wears nothing in Constantine). Keanu’s suits fit him like nobody else in movies—are they real or just digitized in later? Keanu’s blankness functions best in monochrome; hence the black suits. Tilda’s canvas is just as blank, but she fills her clothing with nuance, a subtle awareness of how tiny shifts in posture allow her garments to manifest her sensuality. It’s hot, wings and all.

Since the film is never entirely convincing and only seldom immersing, the pleasures are in the details: Tilda’s fine red socks, Peter Stomare’s (porn-star/nihilist Carl Hungus in The Big Lebowski) witty, scary, satanic Satan, and Gavin Rossdale (Mr. Gwen Stefani) enjoying himself as another bespoke-clad demon (How did he end up in this picture? Maybe he plays polo with Tilda.). Yet, for all their charisma, none of these informed, properly scaled, delicious performances make a dent in Keanu. Their content is no match for his emptiness. 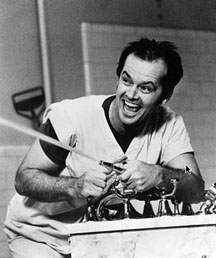 The Jacket is a cinephile’s semi-horror movie, and its story is a mélange of hipster touchstones: Jacob’s Ladder, One Flew Over the Cuckoo’s Nest, Requiem for a Dream, and even The Thin Blue Line. The visual style is a direct cop from Jacob’s Ladder, so there’s no shortage of full-screen close-ups of eyeballs shifting from left to right, or rolling backward, or tearing up, or closing beatifically. And yet, all the oppressive eyeball shots are a relief. A relief from the relentlessly self-aggrandizing close-ups of Adrien Brody and his constantly-in-motion nostrils. While Keanu never expresses any emotion, Adrien seems determined to prove he can express all of them, often at the same time. His main mode of expression is to flare and unflare them gigantic nose-holes.

Once again, he plays a tortured, misunderstood soulful soul and ladles out his aw-shucks grin and Gomer Pyle faux-naïf amble. It’s annoying; he’s Sylvia Plachy’s son! Imagine the hipster upbringing he had—who does he think he’s fooling with all that down-home bogus humble? And how does he account for that perfectly maintained East Village ’90s haircut; good thing he can find gel in the loony bin to which he’s been (unjustly, of course) confined. While there, Brody gets tortured for real, and in as gruesome a way as to satisfy anyone who thinks he deserves it. His torture provides the horror, and it’s horrible. A few fewer eyeball close-ups and psychedelic special effects during the torture would have made it more convincing, but they serve as the handiest symbols of a film that does not know quite what it is.

As in Constantine, a supernatural afterlife looms large in this story, and its rules are even more poorly enunciated than how demons did what when they messed with Keanu. While the plot echoes several Twilight Zone episodes, it’s never as convincing as a good Rod Serling script and never as comfortable with the universe of its own devising.

But the stellar soundtrack—with compositions by Brian (God) Eno—and the cool cast make it entertaining and adult. Jacket’s kind of a bizarro Constantine; while the star chews the furniture—in his “look-at-me-I’m-understating!” style—everyone else underplays to perfection. Excepting Brody, it’s one of the best-acted films in months. Jennifer Jason Leigh really turns down the volume from her mumbling rave-ups like In the Cut. She looks both younger and more mature; no Botox here—she’s growing more powerful and radiant with age. And speaking of aging, Kris Kristofferson shows up in super close-up as himself, showcasing the curious and distracting fact that he has no eyebrows. 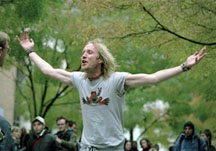 When Keira Knightley appears, I’m sure I had the same thought as everyone else in the theater: “What’s Winona Ryder doing here?” But once I sorted Keira out from her doppelgänger I was consistently surprised by the subtlety and accuracy of her portrayal of an alcoholic, easily aggravated, formerly abused country girl. Her accent is spot-on, as are her gait and gestures. Adrien Brody seems as indifferent to his costars as Keanu, but in a baser, narcissistic way; Keira seems indifferent to Brody’s indifference. Her performance is moving. And only once in the wrong way: when she appears naked in the bathtub, you’re shaken out of the narrative to think: “Oh, don’t debase your brand for a come-and-go flick like this.” Too late. Her nudity in the bath rings especially incongruous in the face of the love scenes that follow; they’re a festival of body-doubling wherein we never see a naked body with a star’s head on top of it.

The gorgeous, brainy, underappreciated Kelly Lynch plays Keira’s drunken, abusive mom (has it really come to this? Kelly Lynch playing mothers?) with a multilayered shading you may not have thought in her repertoire (you who underestimate her, I mean). Her perfect rock-junkie early 70s wardrobe is a shade too groovy for someone in her supposed economic bracket, but Kelly really knows how to wear that era. Mackenzie Phillips, of all people, is almost unrecognizable as a fiendish Nurse Ratchet. She’s got a nice sadistic gleam in her eye and, like everyone else, is willing to look much less glam than usual in the service of her role.

Daniel Craig—likely the next James Bond, and who seemed the soul of sanity in Enduring Love—gets a real star turn as the bull-goose loony in Kris Kristofferson’s evil mental hospital. When Craig shares a scene, Brody shows a lot more focus, and for good reason: Craig blows Brody’s self-indulgent ass right off the screen.

The film makes less and less sense as it goes along, and the last five minutes force these credible performers to appear in some incredible circumstances. They manage, though, and you can almost sense their urging the thing on to its conclusion. For a certain sensibility, The Jacket succeeds in spite of an ending that’s confused even by the film’s own suspend-disbelief standards. Given an unworkable structure, the cast seems determined to overcome less than rigorous plot writing and a star vehicle’s indulgence to find the truth in their characters. And they do.

And now, as though to spit in the eye of every film critic to publish a word in the New York Times or The New Yorker, Ander Monson offers a book-length close read of John McTiernan’s Predator (1987).

Days of the Week

Sarah Anne Wallen lives in Brooklyn and is the poet behind the collection Don’t Drink Poison (United Artists Books, 2015).

Composer and drummer Tyshawn Sorey has emerged as a major statesman on the scene. The New Yorker has called him “an extraordinary talent who can see across the entire musical landscape,” and the New York Times, raising the stakes, has described him as “an artist who is at the nexus of the music industry’s artistic and social concerns.”