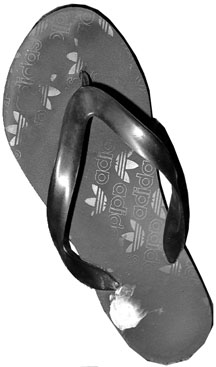 I’ve worn flip-flops in all sorts of filthy, far-flung places, from Jakarta, Indonesia, to Shenyang, China, from Port Moresby, Papua New Guinea, to Vladivostok, Russia. I’ve even worn them for years here in dirty downtown Seoul and never had any major problems doing so, save for a few trampled toes on crowded subway trains (certainly, a simple “Sorry, Whitey” or “Excuse me, Mr. Big Nose” on occasion would be nice). As long as I’m paying half attention to where I’m going, I’ve always managed to avoid stepping on any stray hawked loogies, splattered vomit, stinky doggie doo or other nasty roadside refuse.

There’s always a first time for everything, though, as the above picture vividly attests. Believe me, Singapore was the last place on Earth I ever expected to be the victim of chewing-gum road rage—especially after being warned sternly during my recent Korean Air descent to Changi Airport that all passengers must “declare any chewing gum” in their possession, as if it were as much of a vice as a bottle of bourbon or a carton of Kools. Fortunately, I gave up gum chewing myself years ago, having decided that I already appear enough like a stereotypical American, what with my backwards baseball cap and occasional lapses into what some call Ebonics.

I admit that I was somewhat distracted at the time and had momentarily let my guard down. For starters, I had a lovely lass on my arm, and we had just enjoyed a fantastic banana-leaf lunch of tandoori chicken, red snapper dum briyani, and garlic naan at Little India’s KP Pillai Curry Inn (“Our Raving Gravy will send you craving daily!”). As we strolled down Kerbau Road near the Little India MRT subway station, I couldn’t help but gawk and giggle at all the funny shop signs, like “Traditional Body Charm” and “Plastique Kinetic Worms,” right across from a corner cafe with half a dozen Indian whores in Technicolor saris lounging lazily in the early afternoon sun (on break from the nearby Desker Road red-light district, I presume). Suddenly, I felt something sticky and gooey on my left heel, which called for immediate inspection. Resting a hand on Farah’s shoulder for balance, I raised my foot for a closer look and realized to my horror and disgust that I had been most foully begummed!

After regaining my composure, however, I resisted my initial urge to remove the offending spittle-laced muck, for although I was but a first-time visitor to Singapore, even I could recognize the significance and import of the incident. Clearly, this formerly prim and proper city-state was starting to loosen up and let her hair down a bit, even at the risk of a little gum getting stuck in it. We immediately retired to a nearby cafe in order to document the evidence, lest any others disbelieve us.

Later on, we stopped by a Guardian pharmacy on posh Orchard Street, where Farah said she’d heard that chewing gum could now be purchased after a recent revision of the local anti-gum law. The pharmacist, a rather stiff young Chinese woman in a white smock, informed us that sale of sugar-free and teeth-whitening gum was now legal in Singapore since last year. When I asked if one could purchase sugared gum with a prescription, she was not amused and merely scowled in response. Apparently, the nanny state of Asia is not quite ready to relinquish its overprotective tendencies entirely, only allowing the sale of gum that is “good for you” and “good for your teeth”—and only at licensed pharmacies, mind you.

All I know is that if the old authoritarian ban on chewing gum prioritized the (imagined) right of the group (for clean, gum-free sidewalks and streets) over the right of the individual, it now seems that personal pleasure in Singapore is slowly but surely gaining the upper hand over collective order and morality, even in public spaces. If that means that the streets of Singapore become a bit dirtier in the process, I for one am not afraid to set foot in them, for democracy itself is a rather messy and sticky thing. I’ll just have to be sure that I pay more attention to where I’m going the next time I visit—especially in Little India, lah!

All Too Hip, Not Too Jewish: Jake Kasdan’s The TV Set at 15 Years

In many ways, The TV Set is the elder Millennial’s Network (1976). Both screenplays sprang from the imaginations of Jewish men (TV Set’s Kasdan, Network’s Paddy Chayefsky) looking to lampoon their experiences working in television.