“To Richard Milhous Nixon, who never let me down.” 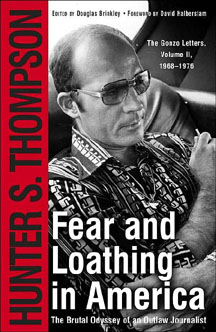 So goes the dedication at the beginning of The Great Shark Hunt, Hunter S. Thompson’s collected early writings. And it’s true, Nixon never let us down. If there was a low to sink to or a cynical gesture to be made, you would find Tricky Dick there in the crevasse.

Thompson, on the other hand, often let us down. Over the past few decades, even though he could no longer report from behind the curtain with politicians and athletes, he continued to pound out increasingly irrelevant tirades from his ranch in Aspen. Then he offed himself just as “journalists” had become paid-off pundits and male-escort shills in the White House press room. Which brings us to the question: What really is the legacy of Thompson’s “gonzo journalism?”

Like Nixon, Thompson’s image took on cartoonish proportions. His druggie reputation overtook him at the same time that the political dinosaurs he once skewered so effectively faded into the smoggy Beltway sunset and the outlaws he followed in Hell’s Angels: A Strange and Terrible Saga (1967) succumbed to their own caricature. As the years ticked by, the drugs became synonymous with the Gonzo, the excess with the craft. Thompson and the character Raoul Duke in Fear and Loathing in Las Vegas became entwined.

The man who expounded on the political gaming on the floor of the Democratic Convention in 1972 and shed new perspective on “the whole doomed atavistic culture” of a cherished event like the Kentucky Derby will be remembered most for his narrative of a drug-laden escape from covering the murder of California reporter Ruben Salazar. Las Vegas is funny, sad, and at times powerful, but it is hardly as politically poignant today as Thompson’s 1971 remark in Newsweek on that crime:

"The Salazar case had a very special hook in it...the ante was being upped drastically. When the cops declare open season on journalists, when they feel free to declare any scene of ‘unlawful protest’ a free fire zone, that will be a very ugly day—and not just for journalists."

Today, we know the cops and the politicians declared open season long ago. But they don’t bother shooting journalists or protesters when it is much more effective to dismantle the power of news and opposition. Today’s media are too afraid of losing access to ask the difficult questions or expose the powerful contrast with Thompson’s view, which he expressed in the author’s note of Fear and Loathing: On the Campaign Trail ’72: “I could afford to burn all my bridges behind me...I went there...to write about [the Presidential campaign] the same way I’d write about anything else—as close to the bone as I could get, and to hell with the consequences.” As cable news spins right-wing talking points and celebrity gossip and calls it “fair and balanced” news, one does long for some old-fashioned subjective gonzo journalism.

Thompson added his own flair in the telling. Reading his pieces is like hearing a friend recount notorious, sometimes debauched exploits. It was subjective and the tales were tall, but you trusted the source, not for his “objectivity” or “accuracy” but because he was willing to insert his personal impressions of the people he reported on.

In part, Thompson needed to understand the “swine” in power to gain insight into the squandered potential of the 1960s. There was a point, Thompson recalls, when “we had all the momentum; we were riding the crest of a high and beautiful wave.” Yet by 1971, “less than five years later, you can go up on a steep hill in Las Vegas and look West, and with the right kind of eyes you can almost see the high water mark—that place where the wave finally broke and rolled back.”

The good doctor’s heyday has many parallels to our own perilous age. A cynical Republican sits in the White House, waging a war halfway around the world to field test a global paradigm. Progressives recovering from the 2004 election surely can connect with Thompson’s sentiment on the Democrats in On the Campaign Trail ’72: “Any political party that can’t cough up anything better than a treacherous brain-damaged old vulture like Hubert Humphrey deserves every beating it gets.” Like the party that championed Humphrey, Democrats today lack a coherent vision, and America is bearing the unfortunate results.

Thompson was ultimately a gambler. This fact, frequently mentioned in his work, pervades his assessment of life. His unlikely contribution to writing is a result of this impulse. His death is both a stand against the rolling tide and a cop-out. His influence on journalism today will come if reporters don’t look to copy his style or his lifestyle but charge against the odds, full-speed into the fat belly of the beast, and recount what they see.

One year after the premiere, Audre Wirtanen discusses her work DX ME FIX ME with Nora Raine Thompson. In conversation, the two laugh about bad doctors, consider the fetishization of pain in dance, and imagine healthcare that actually cares.

Selected and contextualized by composer Bill Dietz and historical musicologist Amy Cimini, these writings are drawn almost exclusively from previously unpublished archival materials, spanning excerpted scores, correspondence with the artist’s mentor and collaborator John Cage, grant proposals (too frequently, rejected), and notes from her self-guided research. Dramatically expanding the available literature on an influential yet little-known experimental composer and sound artist, this volume offers insight into the realist poetics and technical rigor of the artist’s work.

Josiah Thompson’s Last Second in Dallas is not only a revelatory forensic analysis of the Kennedy assassination, but it is also a troubling and timely book about state science, confirmation bias, and a man by the name of Dr. Luis Alvarez.