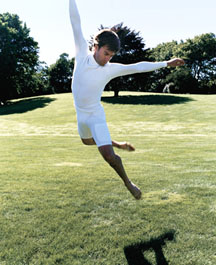 Photograph of Tom Gold in “2wice”–“Gold” issue by Jens Umbach.

In her delightful memoir, Dancing with Cuba, Alma Guillermoprieto remembers her first years spent dancing in New York, including early morning practices of Twyla Tharp’s Medley on Central Park’s Great Lawn. “It’s only the evaporation of the previous night’s dew, a flimsy, transparent veil that vanishes in the first breeze, but if you are fortunate enough to be dancing on that meadow at that hour, it serves to reinforce the feeling that you are floating.” Scanning Christian Witkin’s panoramic photomontage of New York City Ballet soloist Tom Gold as he twists and leaps with abandon across a stretch of perfect grass, one gets a hint of Guillermoprieto’s experience. But the photographs, aptly titled On the Meadow, were inspired by another writer, poet Charles Simic. His same-titled poem accompanies the pictures, one of seven “choreographed poems” that make up Gold, the latest edition of the visual and performing arts magazine 2wice. Packaged as distinct booklets in two sizes, the special issue features the work of four photographers, as they respond to Simic’s poetry with the help of Tom Gold and, in one case, Stacy Caddell, a former NYCB soloist currently working as dance supervisor for Tharp’s Movin’ Out.

The Yugoslavian-born Simic, now one of the elder statesmen of American poetry, has a delicious taste for the vulgar and raw, whether in his own writing or in recent translations of Serbian poet Radmila Lazic’s acid, charged works, A Wake for the Living. But the 2wice poems are mostly gentle, playfully skating over the surfaces of Simic’s curious mind while hinting at darker currents beneath. “This old world needs propping up/When it gets this cold and windy./The cleverly painted sets,/Oh, they’re shaking badly!” he begins in "Windy Evening", as Jens Umbach captures a lightly gilded Gold in sparkly gold pants (the soloist’s surname has proved a great temptation for 2wice photographers like Umbach and Andrew Eccles, who previously covered Gold in silver) catapulting through a darkened theater. In the final image, Gold stands on half-toe, arms outstretched as if the propping up depends on him. Or perhaps he is one of Simic’s “Stars like torches/Of grave robbers entering the crypts of kings.”

The photographs, Nancy Dalva tells us in a brief introduction, are “not literal, but parallel expressions of the written work,” little choreographic gems set to verse. Well, yes and no. Baerbel Schmidt’s whimsical narrative sequence closely follows Simic’s Theatrical Costumes, right down to Caddell in Marie Antoinette wig and Gold with “a lit ciggie in each ear.” Playful and stylized, it is one of the issue’s most satisfying, with a nod toward fashion magazine spreads and bringing to mind the character-driven work of choreographer and visual artist John Kelly. Gold, an artist-in-residence with NYCB’s costume department, clearly relishes dress-up. Other “performances” are not so successful, such as Witkin’s contrived photographs of Simic’s overly cute Leaves, featuring semitransparent apparitions of the dancer surging heavenward inside an arching lane of trees. Besides, it’s a shame to deprive us of a fully present Gold, whether sunning by the ocean as he conjures a more glamorous age in Witkin’s black-and-white "History of Costumes" or hamming it up for Philip Toledano’s camera in "My Magician". Red-faced and mustachioed, Gold serves as comic anchor. “Between his tricks,” writes Simic, “I was nowhere/I could think of.”

ot quite a painting show, not quite a show of sculpture, not quite a show embodying an installation, Korean artist Park Kyung Ryul’s Tense is taut with possibility. Developed from her residency at the DOOSAN Gallery, Park’s sophisticated show seeks to expand the flatness of painting to a three-dimensional degree.