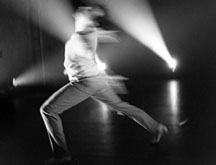 Photograph of “Construction With Varied Materials” in Dance by Neil Greenberg by Tom Brazil.

Titans of American modern dance rain down over the city this April. Martha Graham, Mark Morris, and Trisha Brown together offer a veritable trip through the pages of dance history. Martha Graham Dance Company begins a second season, released from the shadow of Ron Protas and the copyright battles swirling around the ownership of Graham’s works (April 6–April 17, City Center). Trisha Brown, postmodern dance’s reigning heroine, celebrates 35 years of creating works with major visual artists of the 20th century, namely Robert Rauschenberg. The Lincoln Center spring season includes a tribute to Brown’s work with Rauschenberg in a program that includes Glacial Decoy, Astral Convertible, and Set and Reset. All three are groundbreaking works on which the two collaborated. Also part of the anniversary performances are two New York premieres: Present Tense and how long does the subject linger on the edge of the volume… , which draws on the increasingly popular motion-capture technology (April 13–16, Lincoln Center Rose Theater). Mark Morris’s insouciance once got him labeled the enfant terrible of the dance world. His company returns to the Brooklyn Academy of Music (BAM) for a program of old and new works, among them Somebody’s Coming to See Me Tonight (1995), set to songs by Stephen Foster, and the New York premiere of Rock of Ages (2004), set to Schubert. April 19, 21–23 at 7:30 p.m., BAM. 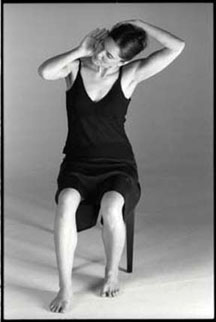 Photograph of Juliett Mapp in One by Tim Mapp.

To see dance history in the making, or at least work that points toward the new directions modern and postmodern dance has taken since Martha, Trisha, and Mark, it’s worthwhile to check out David Neumann, Neil Greenberg, and Osmani Tellez and Juliette Mapp in the smaller dance venues of New York.

Choreographers Osmani Tellez and Juliette Mapp share an evening of performance in the aptly titled Danspace Project program Shares. Tellez’s Out draws on poetry and sound to invoke the complexities and powers of the human mind, but it is Mapp’s One (be wary of the similar titles) that sounds more compelling. An anti–Iraq war dance statement, One is a solo dance set on several dancers. I imagine this means the movement is universal, just as the effects of war and violence.

In a collaborative new work that combines Neumann’s infectious dancing and performer’s presence with playwright Will Eno’s text and images by Hal Hartley, tough the tough is a work that focuses on those not so easily inclined to movement, or dance for that matter. Neumann calls this "reluctant" dancing, and his brand of witty club-dance-inspired choreography is as eclectic as Will Eno’s text.

In Partial View Greenberg suffuses movement with video projections by John Jesurun. Performed to a live score by Zeena Parkins, Partial View challenges viewers’ ideas of how they build meaning out of dance and life. Also on the program is Construction With Varied Materials, also pushing the boundaries of how we view dance.