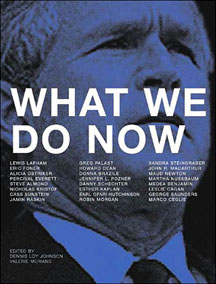 Writer and publisher Dennis Loy Johnson is the creator of the literary weblog MobyLives.com and the founder of Melville House Books, which he launched with his wife, Valerie Merians, in 2002. Their most recent publication, What We Do Now, is a collection of responses by a motley assortment of contributors, including Howard Dean, to the paralyzing despair felt by America’s liberals after Bush’s reappointment. The Rail’s Kate Trainor braved the PATH train to speak with Johnson and Merians in their Hoboken studio.

Dennis Loy Johnson: I love Moby Dick, but I’m no Melville scholar. I’ve read Moby Dick once, maybe once and a half, so I’m no specialist on it. I just think it’s the great American novel, and when it was time for us to name the publishing company, we actually had another name picked out, but that turned out to be the name of another publisher. So at the very last minute, we decided it would be great to name a publishing company after Herman Melville, who’s kind of the epitome of the writer’s life. He died in poverty, a very depressed man. His greatest work was underappreciated. We just thought that this was a great way to show some appreciation for him.

Rail: How did MobyLives evolve into Melville House?

Johnson: We started right after 9/11.

Valerie Merians: With a book of poetry. After 9/11, poets were sending Dennis poems to put up on MobyLives, so we decided, well, let’s make a little book out of this. And things got out of hand from there. The word started circulating among poets, and we got submissions from all kinds of people. We even have a Pulitzer Prize winner in our book [Steven Dunn].

Johnson: We got a lot of press for that. We really didn’t know what we were doing. We were very unhappy with the media discussion of 9/11, and we were interested in what the artists had to say about things. As it turned out, even though we didn’t know what we were going to do—we just thought it was going to be this chapbook, we didn’t even know how we’d sell it—a lot of people, not only the public but the press, got interested in it. The New York Times did a profile of us, then CNN called, and NPR, and it just kind of steamrolled from there. People kept coming at us with book ideas that were pretty good, and we’d try them out, and they’d do okay. So we finally incorporated, but it was never our intention to do that. It was just a collaborative art project that got out of hand.

Rail: Is there one book or one project that you’re most proud of?

Johnson: (to Merians) Uh-oh, which child do we like the best, dear?

Merians: I think we’re most proud of our most recent book, What We Do Now, which was sort of a herculean effort on both our parts, just timewise, because we crashed it in a very short period of time, sort of a lam-speed world record for book publishing—in three weeks—to get it in the stores.

Johnson: We’re still recovering. That was a case where we had an idea for a book and we made it happen. There was such a feeling of urgency about it. It wasn’t about making money or publishing. It was about the real need to speak to a community. We really had something to say, and it was very, very difficult to say it properly and get it in front of people. But we did it, and that was very satisfying. It’s still having repercussions and impact, and we’re still really absorbed in that one. It’s about spreading a message as much as it is about selling a book, in this case.

Rail: What is this urgent message that you’re trying to send?

Merians: After the election of Bush for a second term, we were really despondent. Everybody we knew was really despondent. After we were despondent for a while, we figured, “We’ve got to do something. We can’t just wallow like this. It’s too depressing. What we can do is publish a book.” That became a very galvanizing thing to get out of our own feeling of malaise. We can do something, and we can also give people a push to convince them that they can do something too. The huge coalition of people that did vote against Bush should be very proud of themselves and should not sink into abject despair.

Johnson: Our company has been a real “take things into your own hands” effort. This is the modus operandi that we exist under. That’s how we wanted this project because that’s what we felt people should do. Fifty-six million people voting for the man declared the most leftist senator. We felt that that was the greatest leftist coalition in the United States of America. It was. That’s more people than voted for Bill Clinton, more people than voted for Ronald Reagan. It was a true coalition effort. Our book was a true coalition effort. It’s got people from the [Democratic] party, from outside the party, people who hate the party. There are disagreeing voices in there, but the point is they can all work together to achieve something. In this case, it was the achievement of a book, a unified opposition. We hope it’s analogous to a larger effort, as well.

Rail: Part of your coalition was Howard Dean.

Johnson: Yes. We put out a call. I basically pulled every string and every connection that we have, and we made a wish list and asked a lot of people who we read regularly, progressive voices we admire. We asked him, and he was one of the first who said yes.

Rail: Liberals are being criticized for their feeble response to Bush and his politics. Would you agree that the liberal response has been weak?

Johnson: I think we agree wholeheartedly with that. That’s why we did the book. Don’t sit around, don’t wait. Keep going now. That’s why we crashed the book, that’s why we made it in three weeks instead of making it in a normal cycle, which would have been a year or longer. We just thought that people were so down, if something didn’t happen fast, the whole movement would dissipate.

Rail: How do you feel about people who voted for Ralph Nader?

Johnson: No problem. It’s America. You should be free to vote for whoever you want without criticism. Unless of course you voted for Bush, in which case you’re an idiot. We’re leftists, and the sad thing about America today is that we had to get behind a moderate “Republican”, John Kerry. It was the best we could do. I’m not going to criticize anyone for voting for Ralph Nader. Do I wish that Nader had quit and thrown his support behind Kerry? Yeah, but he didn’t. So, on we go.

Rail: Some leftists feel despondent because their protests have been largely ignored. Many who attended the demonstrations in New York said they felt like people were showing up for the entertainment value of the spectacle, not to support a political cause.

Merians: Well, it was a pretty impressive turnout, the people who came out to protest the RNC. It was a pretty successful protest. Unfortunately, the function of turning out on the street as a protest gesture has shifted. Our expectations are from the sixties—about what could happen if you turned up on the street and made a lot of noise. At the 1968 protest in Chicago that turned into a police riot—there were only about 4,000 people, which is really small, compared to the kind of numbers we have now.

Johnson: But they got better press! You really can’t have an opposition without massive gatherings of people, simple bodies on the street. It’s very important. The problem today, unlike any time in our history, is that the mainstream media is marginalizing these events, even though they’re historic numbers. We were just down in Washington for the inauguration protests, and there was a lot of violence there. There were an amazing number of protesters.

Rail: But it didn’t get reported.

Johnson: Exactly. I wrote a whole book about exactly this, about the 2000 elections and how many significant demonstrations were actively suppressed and oppressed and not covered by the press. The powerful conglomerate press just doesn’t cover it. So we’re all learning to live by another press. There’s a really submerged population, and I’d call it a counterculture, except that it’s just people like you and me. It’s not like the sixties where it’s true outcasts, true rebels. It’s just normal people who want to find out what happened.

Rail: Are any of the proceeds from this book going to leftist campaigns or organizations?

Johnson: Well, we hope to see some profits. We haven’t made a profit in our existence yet. We’ve donated a lot of books. We’re not giving a portion of the proceeds, but as of yet, there are no proceeds.

Rail: How are you surviving in the meantime, if you’re not turning a profit?

Johnson: We’ve been artists our whole adult lives, and we’ve never made anything above the poverty level, so it’s nothing new. It’s a labor of love to be a publisher. You just hold on and hope that a few books catch. For an independent, you don’t need your books to sell a million copies to get by. I think we’ll make it. Of course, if you’re not careful, we’re apt to show up at your house for dinner.

Kate Trainor is a freelance writer specializing in health, nutrition, and news journalism.

Beyond ethnic and racial representation on screens, failure to acknowledge critically appraised films raises the issues of dominant narratives in creative industries. Overlooking The Gravedigger’s Wife is yet another missed opportunity for the Oscars, which could have made history by offering a stage to new, crucial voices.

Erin Markey is a performer and writer/creator of comedic, often music-driven plays. Their most recent works include Singlet (Bushwick Starr), Boner Killer (Under the Radar Festival at the Public Theater), and A Ride On The Irish Cream (American Realness Festival).

Juan Arabia is a poet, translator and literary critic. Born in Buenos Aires in 1983, he is founder and director of the cultural and literary project Buenos Aires Poetry. Arabia is also in-house literary critic for the Cultural Supplement of Diario Perfil and Revista Ñ of Diario Clarín. Among his most recent poetry titles are Desalojo de la Naturaleza [Eviction of Nature] (Buenos Aires Poetry, 2018), Hacia Carcassonne [Towards Carcassonne] (Pre-Textos, 2021), and Bulmenia (Buenos Aires Poetry, 2022). After the publication of El enemigo de los Thirsties [Enemy of the Thirties] (2015), awarded in France, Italy, and Macedonia, Juan participated in several poetry festivals in Latin America, Europe, and China. In 2018, on behalf of Argentina, he was invited to the “Voix vives de Méditerranée en Méditerranée” poetry festival in Sète (France). The following year he became the second Latin American poet to be invited to the “Poetry Comes to Museum LXI,” sponsored by the Shanghai Minsheng Art Museum. Arabia has translated works by Ezra Pound, Arthur Rimbaud, Dylan Thomas, and Dan Fante, among others. Two of his books have been translated into French (L’Océan Avare, trad. Jean Portante, Al Manar, 2018) and Italian (Verso Carcassonne, trad. Mattia Tarantino, Raffaelli Editore, 2022). He lives in San Telmo (Buenos Aires) with his wife — the designer, poet, and literary translator Camila Evia — and son Cátulo.