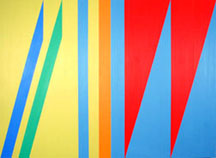 Raising the Bar is an apt title for Sideshow’s exhibition of the paintings of Thornton Willis and James Little because it’s what these two painters do for the painters who succeed them. This is what a painter’s painter does: He opens a door for other painters onto the history of the art and shows that history to be rich in possibilities. Thornton Willis and James Little do not take the history of painting for granted, ignoring it in favor of expressive liberty, nor do they attempt to contain history through parody by employing past styles in self-consciously superficial ways. Willis and Little confront painting’s history head on and attempt, each in his own way, to build on it.

Two distinct strains emerge in Willis’s work from the late 1970s to the present, which he seems to have undertaken the Herculean task of reconciling. The first strain, in which flat monolithic forms appear to have burst onto the canvas just a moment before they’re seen, bears the reductive stamp of minimalism warmed with active brushwork. The second strain, which developed in the 1990s, is comparatively contemplative and calls to mind analytic cubism. In this second phase of his career, Willis employs abutting triangles to create and destroy space with adjacent color relationships—Hans Hofmann’s legendary push, pull.

At Sideshow, Willis continues to use triangles as building blocks, but rather than tiling a plane, as he did in the 1990s, he allows larger forms to dominate his triangulated agglomerations. In the giant “Missmatch” (2004), a mass of triangles vying for spatial dominance rests on a giant, upended wedge of yellow with one point on the painting’s lower boundary. When forms such as this yellow triangle take on the illusion of mass, they detach from their ground and cease to function as descriptive planar units. This lower portion of “Missmatch” recalls Willis’s work from the 1980s, while the brushy mass above it continues to call to mind the cubist space of his 1990s work. This edgy painting hints at a bridge between two modes of painting declared by Clement Greenberg to be mutually exclusive—illusionistic cubism and flat, postpainterly abstraction. In this exhibition, as in the rest of his career, Willis seems intent on challenging not only critical pronouncements but his own conception of what painting is.

Little’s work is equally challenging and satisfying. From his 2003 show at the now defunct L.I.C.K. Gallery in Queens through his more recent exhibitions at G.R. N’Nambi and the Studio Museum in Harlem, Little has been perfecting his variations on a theme, improvising with the diagonal. They cut every which way in his paintings, incising along taped lines with brushwork emphasizing their trajectory. Little works his paint to a satisfyingly gooey consistency, adding wax and paint chips as necessary to more fully body forth color, the true subject of his work. While the architecture of his paintings varies little, the color varies constantly to ever more vibrant effect. Each time you think he can’t make a color hum with greater strength, he does just that, as exemplified by his most recent painting at Sideshow, “Quid-Pro-Quo.” Stunning in its color transitions, Little zips you along from the Naples yellow through cobalt blue and emerald green passages to a rare vertical of cadmium orange that pushes forward so hard that the cadmium red next door recedes.

Little’s color revitalizes a vital tradition in painting—that of Barnett Newman, Kenneth Noland, and Ellsworth Kelly. Newman was perhaps the first painter to draw full attention to the properties of isolated color in works such as “Vir Heroicus Sublimis” and “Who’s Afraid of Red, Yellow, and Blue I.” At close range, as Newman meant them to be seen, these paintings force one into an optical experience of a singular color that subsumes the field of vision. Little works on a smaller scale, but his paintings are just large enough to encourage this effect. That, coupled with the heavy body of his paint, far more substantial than Newman’s rolled-on surfaces, produces James Little’s unique optics. Little’s painting is celebratory at a time when there’s every reason not to be. In showing Little’s and Willis’s work side by side, gallerist Richard Timperio humbly gives the art world not a sideshow but a main attraction.