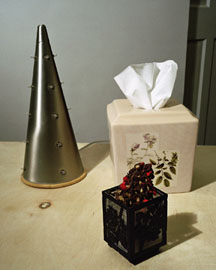 Nancy de Holl, “Anywhere out of the World (after Baudelaire)2” (2004). Courtesy of Taxter & Spengemann Gallery.

For Nancy de Holl’s debut solo show at Taxter & Spengemann Gallery, she presents a group of still-life photographs. Spare and understated, each image is composed of three or four objects clustered together. The items are domestic, more or less, and evoke a kind of late-midcentury nostalgia. There are lots of empty vessels such as vases and bowls, canisters, lamps, candles, baskets, and the like, and the groups are placed on a flat surface—either a wooden table or patterned tablecloth—and photographed in close-up. As such, they lack any physical locator that could place the scene in a larger context (an effect akin to that of Morandi’s paintings).

Isolated scenarios, de Holl’s mise-en-scènes come from her series Anywhere Out of the World (After Baudelaire). It is a somewhat peculiar title, given the Frenchman’s distaste for photography, the invention of which, he scathingly wrote, “contributes not a little to confirming stupidity in its faith and to ruining what might have remained of the divine in the French genius.” Pictures, particularly portraits, are a frivolity he aligned with the narcissistic fancies of the bourgeoisie, and he was contemptuous of the perceived notion that a photograph could stand as an exact replica of the natural world.

Perhaps in deference to Baudelaire, de Holl takes photographs that try to repudiate any sense of natural occurrence. Unlike the still-life photography that has come to the fore in recent years and is exemplified by an artist like Wolfgang Tillmans, de Holl eradicates any suggestion of happenstance and doesn’t seek out poetic beauty in the stuff she shoots. Her aesthetic might be called the artifice of the everyday. Each composition is a poised and precisely formulated assortment of objects, and embedded in each is the process of its making: conception, selection, composition, framing, shooting, and finally, printing. Reproduced more or less true to scale, she forces the viewer to focus on the formal qualities of the objects; the shape, size, scale, and material of each becomes a primary concern and lends a strong sculptural quality to the photographs.

There is a tension in the images between the tactile materiality of each of the objects—cold, rough, smooth, soft, silky, scratchy—and the sterile, flat rendering. I find pleasure in the photographs, imagining de Holl trawling the streets for the objects, rummaging through the bargain bins and pondering the wares of the twenty-first century’s veritable commercial feast. In The Painter of Modern Life Baudelaire writes of traveling anywhere “a passion can pose before him,” and de Holl seems to take similar delight in demonstrating the peculiarity of the objects she finds scattered about her world—her parents’ home, tchotchke shops, ethno-tat stores, flea markets, and the like.

Michael Queenland’s press release-cum-essay attributes the artist’s compositions to a kind of surreal/psychic chance, where meaning derives from juxtaposed entities that somehow shed light on one another. This seems astute, particularly in photos like “Anywhere Out of the World (After Baudelaire) 2” (2004), where specific objects such as a tin cone lamp pocked with tiny lights assert their own fantastical stance and manifold associations. However, I also see her pictures as an exploration of staged environments, not in a tricky way (as in Thomas Demand’s built constructions) but rather in the spirit of complete disclosure: I will give you an “honest” image, and through it, you will remember the oddity of things.

About the time of the earliest portraits, circa 1840, an invisible prosthesis was developed to hold subjects still so that their image wouldn’t blur over the course of the lengthy exposure. The results were stiff, proud, and always a little bit awkward, since the subjects were self-conscious and aware of their postured state. The subject, it could be said, had been turned into an object, first physically in the staging, and then metaphorically in the resultant photo. In de Holl’s photographs, the reverse may be true: Through the acutely artificial scenes, the inanimate objects assume the character of expressive subjects.