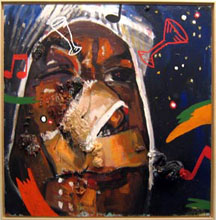 I don’t think I’ll ever be able to think of underwear in the same way again. The three current shows of the late lamented prankster Martin Kippenberger show the similarities and repeated images that made up this most self-conscious of artists’ personal mythology. His “persona” seems intentionally concocted to grab the front pages, not of Artforum but the National Enquirer. The headlines that would chart his career path might read something like: “Painter Doesn’t Paint, Spits at Neue Wilden,” “Worldwide Subway Planned by Artist Goes Nowhere,” and finally, “Skinny or Fat Artist? You Decide.”

Martin Kippenberger the Bermuda Triangle: Syros, Paris Bar and Dawson City, at Nyehaus Galleries, is an exhibit split between an extensive collection of drawings purchased by Tim Nye from Michel Würthle, the coproprietor of Berlin’s famous Paris Bar, and the models and ephemera of Kippenberger’s Metro-net project. The drawings, many of which were done on hotel stationery during the artist’s globe-trotting sojourns, are a whimsical diary of ideas and jokes, accomplished in pen, colored-pencil collage, and watercolor. With Kippenberger’s refutation of painting and the questions of outsourcing, these drawings are an area where the artist’s head and hand are evident. As a draftsman Kippenberger is clever and diverse, the drawings are kinky and satirical and almost too honest in their self-deprecating humor. Artists like Raymond Pettibon and David Cramer are continuing this line of investigation.

The Metro-net pieces are more ambitious. The press release states that Kippenberger dreamed of a global subway system. Two models of the individual entrances are presented along with documentary and publicity photos, blueprints, and a video. The entrances—one in Syros, Greece, and the other in Dawson City, Yukon Territory, Canada—are basically site-specific sculptures. After descending the stairs, you come to a permanently closed gate and ponder the route to your exit in Greece or Canada. Personally, for anyone who has spent any time at all commuting by subway in New York, the thought of traveling around the world underground is a hellacious nightmare, at least on the MTA. While watching the accompanying video of the artist examining the “entrance” at Dawson City, I found myself thinking of Odysseus and his descent into Hades.

Martin Kippenberger, Self Portraits at Luhring Augustine was for me the most satisfying and, at the same time, the most disquieting of these three shows. This selection of paintings and sculptures follows the meteoric rise to fame, the serious, mature international recognition, and the apparent bearded, bedraggled, beer-gutted wastrel period of the last few years of his career. There’s a brutal and pathetic honesty to the poignant images Kippenberger painted of himself, obviously knowing that his trim movie-star good looks and the young, energetic, madcap effigy he’d created with so much care had vanished. (What is it with those high-topped support briefs he seems to have lived in for the last five years of his life?) In “Was heiß ‘Rein na va plus’?” (1984), a blue wooden puppet stands in for the artist. He sits on a cubistic table of yellow and gray and is surrounded by playing cards and a large red wineglass. The puppet holds the Queen of Hearts in one hand and a cocktail glass in the other. The “Rein na va plus” of the title refers to a club tune by P.C. Experience. A rough translation of the text printed at the bottom of the painting is “a) doesn’t work anymore; b) keep on going; c) everything’s okay.”

In a side gallery, a series of simple one- or two-color lithographs are hung around a showcase filled with photos, portraits, books, and exhibition announcements. The pictures in the case dramatically display the arc of Kippenberger’s rise and dissipation. Many of the lithographs feature a reclining figure of the artist, ether exhausted or ill, his bulk holding him in place, but still asking the ironic question: Is this the tragic clown? “Self Portrait” (1982) is a metaphor for Kippenberger’s concept of the artist as canvas. A brown-bandaged head covered with clumps of plastic foam rises from a dark field, like the ceremonial monuments from Easter Island. Musical staffs and cocktail glasses float in a star-filled sky. The physicality of the lumps of foam read as grotesque scabs and hints at the distance the artist would go to distort his image.

Uptown, Gagosian shows ten of the twelve paintings that make up the series Lieber Maler, male mir, works commissioned by Kippenberger for his first museum show at Berlin’s Society for Fine Arts. Before Damien Hirst, Jeff Koons, or even Mark Kostabi started having their paintings manufactured in factories by underpaid “laborers,” Martin Kippenberger hired and credited a local sign painter he called “Master Werner” to paint the pictures for his museum debut. Today, with our outsourced labor market, this doesn’t seem so unusual, but 1981 was the peak of Europe’s “return to painting.” Kippenberger’s gesture was a direct incitement of the German Neue Wilden and Heftig painters. The Lieber Maler paintings are an odd amalgam of mediated, cool, photo-derived images and a slapdash funkiness. As photo-realism these paintings will never be mistaken for the accomplished examples of that genre. The sign painter’s business is to make things look good from the window of a speeding car fifty yards away, and do it fast enough to turn a profit. These pictures are conceptual artifacts as much as they are paintings. The main subject again is Kippenberger, this time as the upper-management traveling salesman of clever art concepts. These glimpses delve into the dialectic of the middle class, and there is nothing more middle than the German middle class. Pictures of TV stars, East German souvenir stands, a suit pocket filled with color-coded pens held together with red rubber bands, cute puppies—all are handled in the dry, industrial, airbrushed manner of the commercial artist. These works function as a group: content can only be deciphered by examining the clues and comparing them with each other. Once again, even at this relatively early date, Kippenberger is pictured standing in his skivvies, confronting the viewer as the near-naked goof, the anti-Beuys, the anti-Kiefer, refuting the Sturm und Drang of the “serious” artists. For Kippenberger, it seems, while the hero stands silent, the fool can still speak the truth.