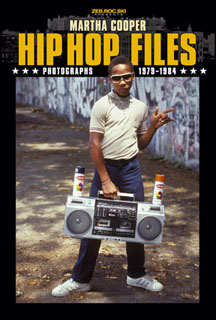 On March 9 top-selling gangsta rappers 50 Cent and The Game formally ended a long-simmering feud that, a week earlier, had erupted in gunfire outside Manhattan’s Hot 97 radio station. Interestingly, the setting for the much-hyped reconciliation was Harlem’s Schomburg Library, part of the New York Public Library system.

Meanwhile, across the river, the Brooklyn Public Library was hosting its own hip-hop truce of sorts. From February 1 through March 20, hip-hop (and outlaw graffiti artists, in particular) attempted to make peace with the past through Martha Cooper’s Hip-Hop Files, Photographs 1979–1984. A staff photographer for the New York Post in the late 1970s, Cooper was in the right place at the right time when rap first boogied down from the Bronx. The photographs in Hip-Hop Files depict what came to be known as the music’s Four Elements: DJ-ing, MC-ing, graf writing, and break dancing.

The agile movements of break dancing are vividly portrayed in “B-boys” (1983), “Kids Practicing Their Breakdance Routine” (Upper West Side, 1983), and “Frosty at Lincoln Center” (1981). This last image captures Frosty of the Rock Steady Crew frozen in midair, horizontal to the ground, and surrounded by a large crowd of curious onlookers. Lincoln Center’s imposing facade in the background hints at hip-hop’s coming acceptance by New York’s cultural cognoscenti.

The graf writers behind the sprawling throw-ups and multicolored masterpieces on the subway lines were especially eager for artistic validation, and Cooper’s wide-angle lens does the trick. Her access resulted in the intimate photographs of “Duro Painting at Sun Rise” (New Lots Yard, Brooklyn, 1981), “Skeme Running on Train” (Bronx, 1982), and “Sketch Session in Dondi’s East New York Room” (Brooklyn, 1981).

Hip-Hop Files isn’t the first collection of photographs to look back at these years and, if anything, it’s a little late to the party. But Cooper’s brand of nostalgia is more anthropology than retro psychology, and her camera is adept at recording the minutiae on hip-hop’s periphery; summer block parties, ghetto blasters, crude DJ equipment, and fiery, rubble-strewn Bronx lots provide crucial context.

What really sets it apart from, say, a similar show in a SoHo art gallery, is the democratic space of the Brooklyn Central Library itself. Cooper’s large, arresting color prints, arranged on zigzagging wooden panels in the Grand Lobby, tend to stop library patrons dead in their tracks. A Caribbean mother with three daughters reminisced about the vintage fat shoelaces in “Pumas, Adidas, and Nikes” (Brooklyn, 1984), while a tall Australian father gestured at the spray-painted train in “Art vs. Transit by Duro & Shy” (Bronx, 1982), admitting to his wide-eyed son, “I used to hate graffiti.”

Arthur Elkin, a retired fisherman, said his stance on graffiti had softened over the years. “These guys weren’t doing anything different than the first cavemen—just expressing their reality on a wall,” he wryly observed. “In fact, this one reminds me of ‘KILROY WAS HERE,’” he said, motioning to a tag that resembled the ubiquitous graffiti created by American GIs in World War II.

An amused look crossed policeman Brian Timmerman’s face as he stared at “Cops and Tags” (1982), a subtle portrait of racial tension featuring two white mustachioed cops standing ramrod straight inside a heavily tagged subway car. The gregarious 39-year-old Timmerman, charged with keeping the peace at the library on weekends, confessed to dabbling in graffiti himself once. “We all had magic markers in our pockets back then, and seeing a newly buffed train was special—like having a new girlfriend,” he recalled. “You look at a painted train up close and it’s ugly, but when you stand back it’s beautiful.”

That was the idea according to Jay Kaplan, BPL’s director of programs and exhibitions. “It’s been an extremely popular exhibit with no controversy whatsoever,” he said. More people were upset about a Coney Island photograph two years ago that featured a teenager smoking. People accused us of not only encouraging smoking but also taking money from tobacco companies.” By contrast, the only scandal of Hip-Hop Files is recognizing just how far today’s rappers have strayed from the music’s original vision as documented by Cooper. Her life-affirming photographs are a sober reminder that rap battles weren’t always fought with bullets.

Tales of Manhattan celebrates the quarter-century history of the gallery as a place for innovative art and an exemplar of the internationalism that has been central to New York’s remarkable longevity as a cultural center.