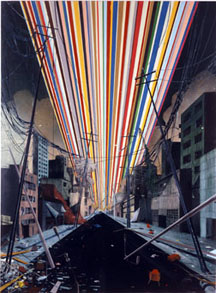 Never having seen de Balincourt’s work prior to This Is Our Town, his second solo exhibition at LFL, I missed the “prewar optimism” of his earlier work. While there is a dystopian narrative concerning the rise of corporate-driven cultural conservatism in America, the message isn’t baroque. Rather, de Balincourt’s view of Armageddon is prettily imagined in rich, striated colors; it’s the end of the world in Technicolor. The fictional narrator of the events seems to be one of the youthful slackers who are seen spying on a massively gated suburb in “Insiders and Outsiders” (2005).

The story unfolds in a series of enamel and spray-paint paintings done to create lush, textural scenes of some monumental catastrophe engineered by pink, sausagelike politicians. De Balincourt’s vision of the end is cloying and disengaged, as if viewed by a precocious teenager. His “Personal Survival Doom Buggy” (2005), a functional-looking ATV loaded with equipment, is a wonderful contradiction. The gas-powered machine looks like a blast, and the possibility of its use suggests adventure more than struggle. The rotating display and manual implicate the commercialization of survivalist culture. It is easy to image the thing at a trade show in North Dakota. The Doom Buggy, built in collaboration with Paul Stec, is the most fully realized critique in the show, even though its stubborn realism is at odds with the romantic view presented in the paintings.

“Blind Faith and Tunnel Vision” (2005) depicts some catastrophic force as a rainbow of light exploding over a ravaged street. The beauty of the explosion is mirrored in the tantalizing details, like the debris and fallen power lines that litter the landscape. It is the intersection of destruction and beauty that gives the show its romantic character. The radiant band of color burns through the sickly hued green world, conveying both awe and gentle revulsion. There are several smaller works in the first series of paintings that allude to the planning and failure of de Balincourt’s governing body, conservative politicians fattened on corporate interest. It’s an idea that de Balincourt explores in his large, systemic painting of a map of America that breaks down the corporate donations of massive chains like Wal-Mart to the Republican party. The predominately red color scheme of the painting is only one way de Balincourt toys with the cultural and political associations of the color.

The gated mansions in “Insiders and Outsiders” (2005) are surrounded by a monumental red wall, which offers a possible ironic reversal of the role of capitalism in relation to its former ideological nemesis, communism. As de Balincourt’s map suggests, America is falling under the control of a few corporations that are breaking down the illusion of choice so central to the tenets of capitalism. The carefully monitored and controlled compound is separated from the vast cities and suburbs hinted at in paintings like “Head for the Hills” (2004) and “Beginning to See the Light” (2004). De Balincourt’s view of society carries a warning about the inevitable self-destruction of capitalism. The optimism of the 1990s has given way to a paranoid, almost schizophrenic society witnessing war and terror.

The second series of paintings in the back of the gallery further alludes to the backdoor communism that corporate America represents. In “Poor Vision” (2005) a vaguely Maoist-looking general is rendered in warm hues, a Marxist palette. The painting is hung in a montage of a fallen chandelier and a large painting of white America frolicking at a tropical resort being waited on by black workers. The racial critique is a subtle damming of the oblivious rich. If there is anything bleak about de Balincourt’s vision, it’s the implication that there will be no revolution, only a nihilistic destruction at the end of the capitalist rainbow that Bush touts as the fount of freedom and democracy. The narrative presents the endgame of capitalism as yet another system of control doomed to failure at the hands of paternal governance.