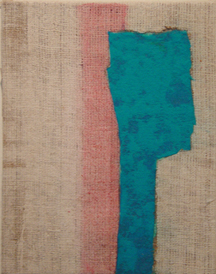 Joe Fyfe, “Portrait” (2004), acrylic and felt on burlap. Courtesy of the artist.

In a current exhibition of works from 2004, all of which were conceived and completed during a visit to Vietnam, Joe Fyfe reiterates his self-appointed task to clear out the busyness in painting in order to examine the basics: the image of the work and its physical presence, as well as the inherent relationships between image and light, pigment and surface. In order to decipher these, Fyfe keeps his materials as undisguised as possible, treating them with almost equal importance as the artistic process and even the finished work itself. Applied to rough burlap that is stretched over canvases ranging from intimate to large scale, translucent layers of white paint build up the ground on which Fyfe establishes finely tuned nuances between abstract forms.

Though Fyfe insists that it is the impersonality of the elementary concerns of painting that continues to intrigue him, Paintings from Vietnam can hardly be characterized as neutral or emotionally detached. With an undeniable meditative simplicity, each work manifests itself as the reflection of a thought, which may be private and secluded from an audience’s distinct interpretation but nevertheless is as unarguably existent as the abstract form of a shadow. In fact, as demonstrated by works simply titled “Rivertown,” “Red Balloons,” or “Small Danu Bhum,” the overall concept is reminiscent of diary entries, in which the viewer is led through brief yet specific details of the artist’s resonant cultural adventure in 2004, when he was invited by Mai’s Gallery in Ho Chi Minh City (formerly Saigon) to work and exhibit in their space. While Fyfe had traveled to Vietnam in the past, it was the unusual experience of working toward a finalized project and within a given deadline that enabled him to encounter Vietnamese culture and the country’s natural environment more intimately. Cham sculptures and ancient pottery seen at Saigon’s museums had a deep impact on Fyfe’s perception, as did his attempt to establish a dialogue with various contemporary Vietnamese artists.

In only ten days, while absorbing the rich impressions provided by local city life, Fyfe completed Paintings from Vietnam. Whereas in the recent past it was the occasionally emerging conglomerate of light blue-green dots or thoroughly contemplated brushstrokes that held the viewer’s eye, this group reveals a new punch. Extra pieces of burlap have been mounted onto some canvases, and strips of deeply saturated felt have found their way into the overall structure, while bolder gestures continue to freely float in their designated space. When asked about this subtle yet sudden change, Fyfe explains that the combination of his pressing time schedule and the emotional as well as geographical distance from his Brooklyn studio had encouraged him to work with an intuitive immediacy, which he would have usually rejected. He destroyed half of the works from his stay in the studio; the rest were exhibited as planned in Ho Chi Minh City before making it to Chelsea this month. While it is undeniable that only the place of origin could have determined the specific characteristics inherent in Paintings from Vietnam, it might just take an examination from afar to fully comprehend the impact of distant experiences.