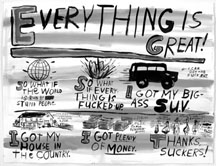 Jim Torok’s latest solo show at Pierogi is a deeply felt, literary comedy presented in a series of ink drawings on paper. Torok employs a simple comic-book style to convey his everyday struggles and eventual triumph over a troubled existence. As a cultural commentator, Torok elevates autobiography into a pathos-ridden chronicle of a modern artistic life with disarming wit and sincerity. Part of the show’s appeal is Torok’s willingness to contradict his own views out of frustration with and eventual acceptance of the world around him.

The show opens with a scathing and hilarious critique of post-9/11 American foreign policy, which Torok relates with the willing acceptance of a schoolboy. In the last panel, Torok’s alter ego, a self-effacing dome head with a gonzo nose, sits in Catholic school recalling by rote that once communism was the catchall Other for American fear. There is a beguiling simplicity to Torok’s worldview, one that never quite shakes the quotidian middle-class idea that everything will be fine. In fact it’s the title of the second work, which has a damning panel where dome head sits passively watching a blank TV, sipping a can of Budweiser. It’s a feeling that the artist continually chafes against throughout the show, alternating between befuddled alienation and rage.

“You Should be More Happy” and “Why So Fucking Mean?” are perfect examples of Torok’s dialectical reasoning about contemporary society. In the former, dome head is exhorted to be thankful for all the great things he has, while in the latter Torok seems genuinely puzzled over the anger that permeates American culture. His rendering of George Bush boasting about the war on terror and the rantings of Rush Limbaugh clones effectively captures the ambivalence of the left. There are several such corollaries through the show, where Torok’s bewilderment with reality TV, conservative ideology, and the art world spills over into hilarious, over-the-top rants against them. “Thanks A Lot, Fuckheads” is a wildly rendered blast against the apparent stupidity and ignorance of the right. When Torok vents, it’s simply great to behold in spite of his protests for reasonableness amid a mediated world flooded with talk of moral values and images of terror, war, and economic uncertainty.

For the most part, dome head waltzes through his life—in “A Day in the Life of the Artist,” for instance, and “Trip to New York”—with a gentle understanding of his situation that is intellectually and emotionally naked. Torok’s happiness, paranoia, success, and failure are truthfully rendered in vignettes that convey a humbleness that seems to have gone missing in the country’s quest for instant celebrity. Only in this sick nation could a brain-dead woman become a household name in a twisted political game for the right to life. Drawings like “TV, What Was On 11/6/04” and “Everyone Wants Wealth and Fame” are brilliant indictments of a fundamental puritanical schism between desire and guilt that permeates everything from entertainment to public policy. In one biting sentence, Torok jabs away: “OUR lives are basically empty and meaningless and we need people like you to HELP us.”

Throughout the show, Torok’s uncertainty and doubt about art, God, and life are fully on display, along with the ego necessary to withstand the relentless criticism and second-guessing that art making engenders. It’s best represented in the two paintings on canvas in the show, “This is A Major Work” and “I Don’t Know What I’m Doing.” The second painting practically shouts out the artist’s vacillation between optimism and pessimism about his practice. The first painting is supported fully by the rest of the show and its humorous play on the historical hierarchy of drawing as painting’s understudy. Hung together, they are an utter and brilliant contradiction, highlighted by the painfully funny act of cowardice in the colorful embedded still life suggested by his ever-present wife. Torok’s process of self-censorship, arising out of his middle-class guilt and artistic uncertainty, is at the heart of the painting. Together, in a dialogue that courts disaster, the two works locate the source of Torok’s contradictory impulses to deny and convey truth.

The impulse to tell it as it is, through perfunctory renditions that forsake displays of beauty and skill, is undeniable. The final work in the show, which may actually be the first, is a small work hung over the sign table titled “Everything is Great!” It is a freeing admission, or confession, about being part of the system. “So what if the world is run by stupid people. So what if everything is fucked-up. I got my big-ass S.U.V. I got my house in the country. I got plenty of money. Thanks suckers!”

Double Existence presents works on paper and sculpture that offers the "double" perspective of someone coming from a culture very different from the one he lives and works in now; it may also be true that "double existence" refers to the double life—internal and external—we experience during the course of our existence.

Arthur Jafa: A Series of Utterly Improbable, Yet Extraordinary Renditions

On the day I visited Arthur Jafa’s exhibition at the Julia Stoschek Collection, Berlin, there was a woman dancing in the gallery. She hugged the left-hand wall of the second room, jerking her hips from side to side as if she were in one of the city’s many nightclubs.