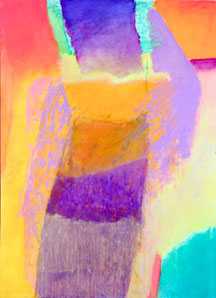 The boldly colorful paintings that make up Emily Mason’s show of recent work reside in a fickle and uncanny space—one with parameters as drastically thin yet overwhelmingly vast as all the myriad tones and nuances existing between like colors. Nebulous expanses of pure color blend and collide and argue with one another, then suddenly crystallize at some fugitive moment of clarity as if rendered from supersaturated anxiety. With decided idiosyncrasy, Mason doggedly investigates the possibilities of what Kandinsky called the inexhaustible material of color and form.

Elsewhere colors are far less natural, and forms remain persistently unknowable. The garish Technicolor monoliths that dominate “Juice” (2004) and “Water Table” (2004) serve to underscore the sensitivity, richness, and flow of “Embraced” (2004). Filling a serpentine rivulet, vivid yet fragile colors fall into and neatly stack upon one another while fibrous lavender splashes accent and relinquish balanced stasis.

There are a number of small oils in the show, but they mostly demonstrate how well suited Mason’s work is to large canvases. Rather than agitated studies of discrete color relationships, “Turtle Bay” (2004) and “Dew Drop” (2004) both implode under external duress and merely reconcile with spatial constraint. Flat patches of color beg to be dappled; grimy opacity wishes to be lean. In fact it is the small, rectangular “Canyon” (2004) and “Bee Hum” (2004) that seem the least diminutive, despite being so. In them Mason not only seems after a wholly reconsidered set of goals, she also cooperates with the canvases’ features rather than against them. The artist taps into the rectangle’s inherent energy to enhance the description of fissures and suggest subtle lateral movement.

That fungible intermediate space at times falls between diffuse abstraction and unconscious modeling after nature; elsewhere it exists between natural and unnatural color, or between cohesion and disunity. Mason, never unwilling to sacrifice harmony in favor of espousing more interesting dilemmas, often ignores much of Kandinsky’s prescriptive canon in hopes to build, by the dictates of incorrigible logic, the most fabulous pictorial architecture imaginable. But in doing so, she adds her own fresh chapter to the tradition.

Daughter Emily Mason decided it was time to sort through her mother’s archive of a life spent championing abstract art in America to compile a monograph that richly illustrates and closely examines her mother’s paintings, prints, and poems.