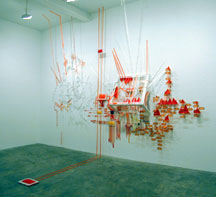 The traditional categories of painting, drawing, and sculpture have for a long time been useless in understanding the art object. Where they can still be of service is in providing artists like Diana Cooper with a set of rules to ignore. She does so quite effectively in Swarm, her most recent show at Postmasters, which makes a case for keeping said outmoded categories around just to send them up.

Cooper’s painting-, drawing-, and sculpturelike objects are some of the most representational abstract artworks being made right now, and they appear calculated to resist summary and characterization. It’s safe to say they’re more like culture than nature in the sense that the forms, the way they are assembled, and what they’re made of, are all products of built environments. The coy “mixed media” designation on the exhibition checklist belies the importance of raw materials for Cooper, and the enumeration of the weirdly banal substances that make up her artworks—pom-poms, map pins, felt, acetate, neoprene, Velcro—shows that she is clearly an artist for whom materials are motivators. The specificity of the objects that go into her installations is logically coeval with the artist’s “idea” in the making of the artwork; it’s difficult if not impossible to determine whether the materials were selected to make the art, or if the art was made to respond to the materials.

There are quite a few artists who share a similar accumulate-and-arrange attitude, but unlike Sarah Sze, Jessica Stockholder, or Jason Rhodes, none of the raw goods of Cooper’s art are complete and functional in and of themselves: assemblage occurs at a more elementary level. Looking at Cooper’s work, it seems important that the basic building blocks of the installation have themselves been meticulously constructed, like the felt-covered foam-core brackets that hold up some of the cut paper shapes in “Untitled (The Emerger).” Most of the materials used could have come from Staples, and there’s some glory in the redeployment of map pins and corrugated plastic for a purpose that exceeds the scope of such excruciatingly boring items.

Where Cooper’s work succeeds is in suggesting different analogues to her constructions—architectural models, circuit boards, construction sites, telephone doodles—without letting any one of them determine their meaning. The works really aren’t like anything except artworks, and what one ends up with as a viewer is a nondirected tour through an artist’s visual thinking. I don’t think decoding the work is an appropriate response, because I’m not sure there’s a definite, delimited meaning there to be uncovered. It seemed more profitable to acknowledge the associations called up by each piece and try to triangulate what it means through those formal and material echoes of the real world. For example, Swarm for me equaled bird flock plus TV weather map plus office cubicles. I have no idea if I experienced Swarm in a way that was in accord with the artist’s intentions, but even that seemed fitting.

I did get a bit suspicious, though, when faced with “Orange Alert (USA),” a nice-looking installation in the rear gallery that referred, according to the press release, to the “US terror alert color code instated by the Bush administration after September 11, 2001.” Whether on the part of the artist or the gallery, this seemed like a too-canny piece of salesmanship. Not to say that Cooper’s work, or abstraction in general, doesn’t talk about serious stuff, but the imposition of a top-heavy concept on art so admirably light on its feet was something of a drag.