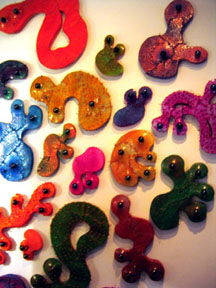 In his classic book Principles of Art History, Heinrich Wölffin establishes the concept of the “development of style” and lays out five opposing dynamics that signal its evolution. The first of these dynamics is the advance from a linear style to that of a painterly (planar) style; that is, using forms, light, and shadow and flattened space instead of just line as a means of representing a more true visual representation. This idea became the foundation of modernism’s line of progressive evolution. Now, with postmodernism and poststructuralism, we see that there’s a parallel development in the reading of art history. Rather than the straight chronological advancement of movements and developments, art history is seen as planar, not linear, not moving in straight lines or even in the same direction. In short, those artistic markers that bound a style or mode to a time are no longer static. We are free to reach across time and tendency, to borrow whatever devices or styles we need, to recontextualize them and use them to accomplish our goals.

What does all this have to do with the work of Carol Salmanson, Jae Hi Ahn, and Mary Ann Strandell? All three of these artists deal with nontraditional media. All three have developed bodies of work that relate to or critique technological advancements. All three appear to have borrowed historic views of the “future” and used them as stylistic criteria.

“Luminous Layers,” a light installation by Carol Salmanson, is an elegant environment that completely transforms the gallery space, recalling not only the sets of early Star Trek episodes but also the disco lighting of the late 1970s. Backlit panels of PVC, intricately angled into niches and alcoves, are the structural space into which Salmanson’s light sculptures are placed. The lighting elements are simple, narrow stainless-steel boxes attached just above eye level. Struts of red-, orange-, or blue-colored diodes descend on plastic bars like the frets on a guitar neck. This illuminated space carries Dan Flavin’s ideas of light as colored volume to a new conclusion, and the architectural setting invites observers to bathe themselves in the ambient hues.

The work of Jae Hi Ahn implies a strange cross-pollination of local and alien life forms that are sometimes cartoonlike, sometimes strikingly organic, but always in awe of nature. “Rubberworms,” the whimsical title of this collection, pays homage to the transparent plastics and iridescent materials these wall sculptures are made from. Some shapes echo “Atomic Age” design, their brilliant colors and pearlescent patinas evoking psychedelic squeeze toys. The textural patterns and the eyelike lumps invite comparisons to synthetic fishing bait and establish a biological template that exists somewhere between a bacterium and a fungus. A cluster of smaller works in a corner evokes colonies of spiky larvae in pods with tendrils and egg pouches that are ready to burst. Despite the odd grotesqueness, there is a strange mingling of allure and repulsion that is hard to resist. It’s hard to resist the desire to reach out and touch these pieces.

I still remember the enchanting first experience of finding a tiny lenticular print in a box of Cracker Jacks. Its illusion of depth and movement gave it the magic of some kind of science fiction fantasy. Mary Ann Strandell creates intricate abstract compositions of colored lines and shapes that flicker and flutter while floating in a three-dimensional space. There’s coziness to this low-tech method, which enables striated plastic to exhibit the illusion of depth and movement without the necessity of an electric plug. In “Transit Que” (2004) a storm of horizontal ribbons in shades of blue, green, and red float over occasional ovals and vertical bands. The complexity of the picture, its layering in depth, and the feel of movement break all the rules of modernist painting, and though recalling aspects of formalist abstraction, the lenticular print bares a tongue-in-cheek genuineness that comes from its subtle subversion of theoretical doctrines. Other pieces like “Indian Red” (2005) have ovals containing recognizable images of trees, foliage, or flowers. This juxtaposing of fuzzy abstract forms, patterned shapes, rich colors, and representational images creates an even more engaging view.

These three artists in their choice of techniques and styles employ a kind of retro-futurism. The possibility of using the past’s view of the future to capture the essence of the present makes obvious the complex nature of today’s state of art history, a case of back to the future present.

“My paintings used to be dense and layered, and lately I’m separating out the parts.” This was Keltie Ferris’s remark in a September 2015 interview with Jason Stopa about her exhibition that year with Mitchell-Innes & Nash.

It was midday and the rain fell in torrents. The Seine, swollen by the continuous downpour, had risen to a dangerous height and flooded part of the wharf. From time to time, Rodolphe glanced impatiently at the toll gate. Finally, in the distance, he saw a man and woman advance behind the shelter of an umbrella. He recognized the Schoolmaster and the Owl.

A blazing fire burned in the hearth and a lamp placed on the dresser cast a bright light throughout the apartment. Rodolphe’s bed, surrounded by thick curtains of green damask, remained in darkness.