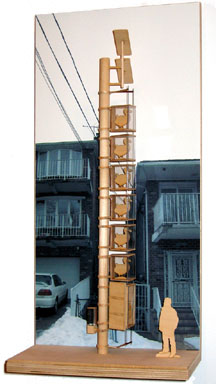 Lost in Queens: A Natural History Museum in 7 Parts is the program for the research and projects by Brian Walker at Plus Ultra. Walker presents an aerial view of Queens populated with numbered icons of animals both extinct and extant, as if indicating habitats or “finds.” Instead, they are chosen sites for seven projects of architectural fiction, whose plans are displayed along the left-hand wall. Together they make up a proposed decentered Museum of Natural History, with each of the seven projects designed to hold a different collection of specimens. The sites of this sectioned museum are art historical, taken from Gordon Matta-Clark’s 1974 work, “Fake Estates,” in which Matta-Clark purchased and presented commercially useless “scrap” New York real estate as commentary on our ownership society.

Each of the seven projects are presented with compelling organization in computer-rendered plan, elevation, and axonometric, and so assume a playfully outsized degree of authority in their employment of a professional design language. Stylistically, they cross the stockpiling urge of the specimen collector with the modular functionalism and viable utopianism of an architect such as Yona Friedman.

While some proposals are made to house actual collections, as in the “Harvard Collection of Comparative Zoology Ant Collection,” others are intended to gather all known specimens of an extinct species. For the eggs of the elephant bird, a tall cousin of the ostrich found in Madagascar until the seventeenth century, Walker wryly designs a microplot museum inspired by Brancusi’s “Endless Column.”

These are inversions of Noah’s ark: Rather than including the minimum number of living species, he builds for the maximum number of extinct ones. One of the seven projects, the “Elmhurst Center for Dodo Research,” is mocked up as a neat balsa-wood model, complete with a Dan Graham “Homes for America”-inspired backdrop of drab tract housing.

Along a third wall are displayed sets of texts describing journeys by the artist to the Matta-Clark sites—the field notes of the spatial anthropologist. In acknowledgement of the role of the subject, Walker includes in each expedition report a commentary on the local diner, where he collects his thoughts and comments on the quality of his pancakes. Following a goofball geographic brief, Walker includes wall diagrams of not only the legal zoning envelopes of the Matta-Clark sites but also photographic data on the pancakes and the diners where they were eaten.

The projects are site specific but only insofar as they are an expression of the limit conditions dictated by the city zoning regulations of height and setback for that particular parcel. This outer-limit shape acts as a formal organizer within which Walker creates functional architecture with fictive “use value,” as in the bookstore and café in the project for the Jamaica Quagga Kiosk, where the shape of the lot resembles a piece of linguine.

It is an architecture of display, follies of modernist glass enclosing Victorian curiosity cabinets. The frame is the content. With a confidence born of tight graphics and auto-CAD authority, differing fields of history are layered over each other—personal history, art history, natural history.

On a self-governed computer monitor in the gallery, texts describe the evolution of the project from its origin in the design of a natural history museum as an anatomical theatre. That Walker has moved from an architecture of complete inwardness, as in the concentric amphitheater, to its opposite, a decentered, sited architecture, does not seem to be fully addressed. The exhibition speaks to the site in an artificial way, without touching it in social terms. The passing breakfast commentary related in the journals serves as proofs of the artist’s presence at the site without continuing from there to engage the site in terms of ongoing social relations.

The conception of enclosing the fragmentary Matta-Clark site within a modernism glass box and filling it with Darwinian curios seems at times like an overarching conflation, fruitful in providing a structure within which to generate work but perhaps tautological. The projects, although entertaining, tell us little more about Matta-Clark, or the Queens sites, or the natural history collections.

Interesting questions are unfortunately left unanswered: What is the institutional connection between the aesthetics of art display and Walker’s aim of displaying “the best of their kind” collections of natural history? Can the local, sited place ever be made meaningful when historical knowledge is privileged over the spatial? Do the adjacent Queens landowners know their lots are doormat-size sites of art history?

JOHN HAWKE is a contributor to the Rail.