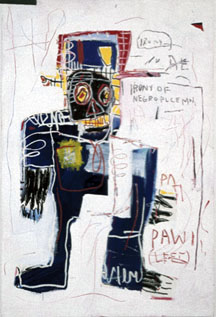 Jean-Michel Basquiat, “Irony of the Negro Policeman” (1981), acrylic and oil paintstick on wood. Collection of Dan and Jeanne Fauci.

I heard about the Brooklyn Museum’s Basquiat retrospective a couple of months ago on CNN’s ticker. Sandwiched between the news that Rod Stewart had proposed to his girlfriend atop the Eiffel Tower and relationship gossip about Brad Pitt and Jennifer Aniston was the blurb that Basquiat would open at the Brooklyn Museum in April. Now that all the things that were “wrong” with 1980s art (money, expressionistic painting, the deification of youth) have cycled back into the art world mainstream, a Basquiat retrospective feels right on the money right now. He was the subject of a movie made by Julian Schnabel, his shows always sold out, Basquiat is national news on the CNN ticker. Yet his work isn’t really ever talked about. Basquiat is BASQUIAT!, the black-graffiti-kid-turned-“fine artist” who achieved one-name status by the time he was 21, became close friends with Andy Warhol, then died of a heroin overdose in 1988 at the age of 27. Not exactly a life that sheds its mythology.

Basquiat was both the beneficiary and the victim of the dubious invasion of graffiti into galleries, and his place in the popular imagination is riddled with implicit exoticism—look no further than the cover of a recent Art Review magazine on “urban art,” featuring a Basquiat caricature. His work is no more urban-themed than many of his New York contemporaries, but it will always be “urban” because of his race. An average Basquiat is sloppy and crude, but obviously calculated. The affect of primitivism was a style he never quite grew out of during his short career. Basquiat’s chronological arrangement portrays an artist whose shadings were subtle and profound. His early 1980s work looks nervous and cluttered; the mid-80s paintings are nasty, mean, and clearly his best. The latter part of the decade saw a palpable creative waning.

Consistency is Basquiat’s strength and detriment. Almost all of the works combine copious text fragments or miscellaneous lists with images, a painting strategy that’s absolutely ubiquitous now and one he helped pioneer. A stroll through Basquiat can feel like hearing the same joke over and over but also brings up the question of why someone would rely so heavily on repetition and text saturation as strategies. Importantly, Basquiat was right in the thick of it when no wave and hip-hop broke in New York City in the late 1970s and early 1980s. He played in the spastic band Grey and produced the classic Beat Bop compilation. An important theme in hip-hop then and now is information—referencing, name-dropping, the linking of apparently disparate entities. Graffiti writers use repetition to spread messages, or just names. Like advertisers, writers serially repeat tags to the point where they become inescapable. Information density and serial repetition are the most obvious elements that Basquiat brought with him from his extracurricular activities, and each is an important element in why his work felt so original.

A sense of consternation, even disbelief, of historical records grounds Basquiat’s work. Persistent ©s and ™s append his words, as if he’s claiming them for himself or maybe just calling special attention to them. Hank Aaron, milk, police, Brazil—all are copywritten by Basquiat at one point or another. One early poem contains the line “Little Nazi tea sets with eagles on them,” the conflation of Nazism with a symbol of freedom epitomizing the societal contradictions he seems to be taking aim at with his copyright reclamation projects. He won’t allow the meaning of anything, whether it’s milk or Nazi tea sets, to be dictated by some faceless entity for his uncritical acceptance.

Crowns, copyright symbols, lists, and sports are everywhere in Basquiat, and each forms a microcosm of the predominant theme of his work: mistrust of history. A 1981 football helmet emblazoned “Aaron” (as in Hank) presides directly in front of a drawing from the same year that consists of nothing but a crown, a baseball, and the caption “Famous Negro Athletes.” The 1981 painting “Per Capita” shows a black boxer carrying a (Olympic?) torch wearing ludicrous Everlast shorts decorated unceremoniously with ugly brown and black splotches of paint with the hanging phrases “Per Capita” and “E Pluribus” disrupting the purely pictorial nature of the image. Several pieces from 1982 depict frenetic-looking, stressed figures wearing long, threatening spiked cleats or holding a weapon. Although it’s likely that Basquiat respected and perhaps even revered the baseball players and boxers he so often makes reference to in his work, the crowns and halos that hover above their heads don’t quite feel “ennobling,” as the curators’ wall text suggests. The gesture feels ironic, an illustration that these are the few blacks who have achieved state approval but only because of their superior aggression and physicality.

Something congeals in Basquiat’s work from 1983–1984. Remarkably, at the age of 24, he was at the height of his powers. Repetition begins to figure more frequently and more evocatively, thanks to Xerox machines. As opposed to the often-impenetrable interiority of some of his earlier work, his paintings from these years pursue the quasi-surreal inner logic he’d become known for, yet they project outward, their themes blending personal iconography with the language of advertising. Racism and racial caricatures begin to figure more heavily, perhaps an outgrowth of Baquiat’s status as a token black man in a mostly white art world. Figures that a few years earlier seemed to be struggling for dignity or dodging stereotypes by 1984 look shocked, nervous, and charged with fear.

Basquiat’s work is often difficult to like, which is bizarre considering his status. He was obviously a “feel” painter, and most of the pieces are dense, sloppy, difficult to look at, and somewhat self-indulgent. But he’s an incredibly important precursor to the new generation of contemporary artists, maybe even a lesson of sorts. If Basquiat’s work really did have a message—and the prescient cultural mash-ups that characterize his work suggest that he did—it’s long since been co-opted by the same faceless history-dictating entity he seemed to detest.