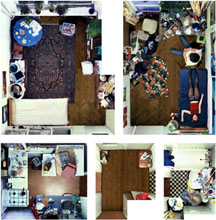 For those who live in urban apartment buildings, one of the most disturbing nightmares is to be unknowingly spied upon by a neighbor, be it through a small crack in the closet (think of Roman Polanski’s The Tenant) or a hole in the ceiling. What would they see, and what would we feel if we knew that there was no corner left at home that could provide refuge from a scrutinizing and judgmental eye? In a way, this concept of an omnipresent mind, which could study us and our most intimate daily life as if it were captured under a laboratory microscope, is what many religions consider to be the exclusive right of their preferred deity.

Not particularly spiritual in nature and rather conceptually conceived, the new photographic work of Polish artists Aneta Grzeszykowska and Jan Smaga (both born in 1974) focuses on the unusual documentary depiction of domestic apartments, viewed from above. In these images, the ceilings have mysteriously been removed, leaving the structure of each space bare, ready for our inspection. Stripped of their privacy and seen from this unusual angle, furniture, memorabilia, kitchen equipment, clothes, plants, knickknacks, and the people who actually live there paradoxically appear to be left without any secrets, yet they remain beyond unapproachable.

As the work assigns to us the role of the hidden voyeur, we realize that we cannot influence what unfolds in front of us, and hence our examination loses its perversity and becomes rather scientific. This psychological distance between the viewer and the portrayed subjects is nourished by the highly factual layout of the photographs. Reflecting the actual architectural floor plan of each apartment, Grzeszykowska and Smaga’s works are shaped according structural angles and are primarily installed in multiple panels. The more architecturally complex the subject, the more elaborate its photographic transformation into one of the artists’ convoluted “Plans.”

This state-of-the-art quality of the works’ presentation is reflected in the complicated artistic process involved. In order to arrive at each final, seemingly unaltered image, Grzeszykowska and Smaga take hundreds of photographs, assembling and combining the puzzle pieces on the computer while literally putting them in perspective. However, as soon as each “Plan” reaches its final stage, the traces of any digital media are kept to a minimum. There is no sense of overproduction or Photoshop gimmick, as the intriguing richness of forms, saturated colors, and intricate patterns of wooden floors or oriental carpets fuse into a visual magnum opus.

Though Grzeszykowska and Smaga live and work in Warsaw (where they find the apartments that inspire their “Plans”), it might seem surprising that the photographs hardly reveal any geographical distinctions. While expectedly from somewhere in the Westernized world, be it Berlin, Warsaw, Paris, Brooklyn, or Toronto, “Plans” will encourage numerous remarks by viewers regarding their recognition of this or that familiar object, layout, or bathroom tiling. In this context, Grzeszykowska and Smaga’s work manifests as a true metaphor for the decreasing subtleties in contemporary existence, for better and for worse.

Theater is Refreshing With The Watering Hole

Wong Ping’s world is full of hyper-contrasting gradients within forms, and the neon sheen of his characters’ various body parts appears less like an effect of light than some sickly glaze on a dessert. In the New Museum’s darkened galleries, frames rush past almost too quickly, and scenes of longing and sex—mostly not actual sex, but frustration, budding fetishes, fantasies—are gemlike and addicting.