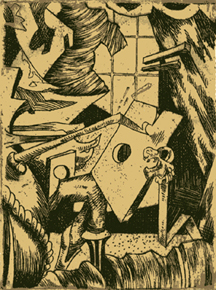 As our newly duly elected leaders tell us at every opportunity, we live in a changed world since September 11. This new world is divided between those who recognize and accept the conclusiveness of these changes (and will ultimately prevail) and those who do not (who will perish). The former must reexamine long-held opinions and assumptions and develop forward-leaning strategies in all areas of public life.

It has been clear for some time now that the American people love art—the museums are choked with visitors and the art market is booming—but hate artists, who are widely regarded as elitist troublemakers. In the old way of thinking, these two things were seen to be irrevocably linked; if we wanted art, we had to endure artists. In the new era, we can perhaps reconfigure. Globalization is providing answers to this dilemma in other fields, and will expand the possibilities in art as well. Art production in China, Turkey, South Africa, and elsewhere is up, and could easily meet the increased demand in the U.S. There is plenty of product out there already, and we can import whatever more we need. We’ve stopped making pencils, automobiles, and appliances in America. Why are we still making art?

Even though cultural issues played such a large role in the recent presidential election, cultural producers have failed to fully understand the long-term implications of this shift, and have been slow to respond to the new imperatives. In this new era, we must stand behind our fundamental principles and beliefs. We either believe in the free market, or we don’t. If we do, we must embrace it completely, and stop making exceptions. For the Market, everything; against the Market, nothing. And that must include artists.

For those artists who embrace the market and reliably produce attractive consumer goods, no change is necessary. Let 10,000 flowers bloom. But for those artists who cannot make it in the market, and who see their role as being resistant, or even dissident, a rude awakening awaits. Let me be very clear: I am not advocating (as have some of my more Malthusian colleagues) either euthanasia or incarceration for these hapless souls. God knows we do not need the specter of more “detainees” at this juncture.

All I am saying is give the market a chance, and stop artificially propping up artists who can’t or won’t make it in the market. And that means eliminating art subsidies of all kinds, including “private” foundation support for nonprofit “artist-centered” or “alternative” organizations. Without those subsidies, these small community-based organizations will not long survive, and will go the way of free medical clinics, low-income housing, and other social welfare programs. And without their support and encouragement, independent “artists” will eventually disappear. Some of them may find gainful employment. I, for one, would support retraining centers for these people (as long as these are faith-based operations, of course).

The current system of “support for the arts” is really just another tax on the wealthy—an insidious marriage of the culture wars and class warfare to make the rich feel guilty about their success. Once again we say, let the free market work: collectors, yes; alternative spaces, no. When we subsidize private companies, that’s investment. When we subsidize public entities outside the market, it’s welfare. In the new Ownership Society, we say, “If you can’t own it, don’t support it!”

If the market was allowed to operate as God intended, without government regulation (or private-foundation meddling), there would be no more need for theoretical discussions about relative values, or in-depth critical analyses. In a free market, consumers determine all values, and the majority rules. The artists who sell the most work for the highest prices are the best artists, period.

It has been argued in the past that alternative artist-centered spaces do serve a worthwhile function within the market, providing a sort of semi-pro “farm team” for the commercial galleries and museums. But these days the farm teams are at Columbia and Hunter, or the Art Center and Cal Arts, where young artists are less likely to pick up bad (nonprofit) habits. We should endeavor to close the gap between education and gainful employment. As the economy changes, even the marginal benefits of artists are disappearing. We no longer need artists for gentrification purposes, since it’s easier just to move the lawyers into the lofts straightaway.

Let’s face facts: noncommercial American artists have been an embarrassing anachronism for years now. They somehow manage to offend both faith and reason, mocking religious devotion and questioning scientific certainties. They sit out on the edge of society in their thrift-store chic and their precious eyeglass frames and snipe at everything we hold dear. They flaunt their “diversity,” as if this was a positive value rather than a perversion. And they continue to ask uncomfortable questions that the rest of us have answered definitively long ago. If these “artists” want support and encouragement, let them go back to Europe, or Canada! Or let them go to Cuba, and see how they fare under their beloved Fidel. He loves “artists.”

We will, of course, still need the full array of art managers—curators, dealers, consultants, etc.—many of whom will be more than pleased not to have to deal with “artists” anymore. And we all know the art market would function much more smoothly without “artist” interference.

In this post-9/11 era, things are becoming clearer every day. Before long, everything will be revealed in black and white. Either you’re for God and freedom and Bush and the market, or you’re for the terrorists. Each of us must make a choice, and then resolutely defend it. A few dissident artists asking questions can be dangerous for us all, since it threatens the certainty on which our safety depends. If you want to help, please, support our troops, not artists.

Railing Opinion is an open space for dialogue on the current art world. We invite critics, art historians, artists, and viewers to participate.

Thoughtfully co-curated by Gerry Beegan and Donna Gustafson, a selection of posters, print media, courtroom sketches, artwork, and photographs document the construction of Angela Davis’s public image by mainstream and alternative media. Interspersed with the archival material are works by contemporary artists who continue to build upon Davis’s philosophies of freedom.

A group of artists, gallery owners, and museum employees issue a call for museums and art galleries in New York City to close for one day as an act of protest against a war the U.S. is conducting in a faraway country. The Museum of Modern Art, the Whitney Museum and the Jewish Museum, plus many art galleries, comply with this request. Only two major museums decline, The Metropolitan Museum of Art (which does, however, delay the opening of an exhibition for one day) and the Guggenheim Museum, which is then picketed.