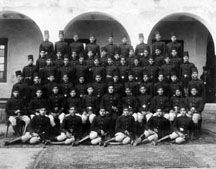 Considering photography’s unique relationship to the historical genre of portraiture, Roland Barthes wrote, “What I want, in short is that my (mobile) image, buffeted among a thousand shifting photographs, altering with situation and age, should always coincide with my (profound) ‘self’; but it is the contrary that must be said: ‘myself’ never coincides with my images; for it is the image which is heavy motionless, stubborn (which is why society sustains it), and ‘myself’ which is light, divided, dispersed.” Portraits inevitably fail to capture our inner life, yet we continue to pose; and the images that are produced function to identify us even while we don’t recognize ourselves in them.

Founded in Beirut, Lebanon, in 1996, the Fondation Arabe pour l’Image (FAI) is a nonprofit organization with a mandate “to promote photography in the Middle East and North Africa by locating, collecting, and preserving the region’s photographic heritage.” The collection encompasses images from the early nineteenth century to the present and currently includes over 150,000 photographs. Run collaboratively by a group of photographers, filmmakers, and scholars who live and work in Beirut, Paris, New York, and Cairo, including Raad and Zaatari, the foundation hopes to foster research, education, and exhibitions around the growing archive. Although in the nine years of its existence FAI has organized fifteen exhibitions, Mapping Sitting is the first to come to the U.S.

Portraits for purposes of official identification are the first and most mundane category of images in the show. On one wall, 3,600 finished studio portraits from 1935 to 1970, wallet-sized images to be used for passports and licenses, are neatly arranged in a grid. The arrangement is arbitrary—there are sections of people wearing glasses and people wearing white, men in suits and women in floral patterns. All the photos were printed from the negatives of Antranik Anouchian, who established his Studio Anouchian in Tripoli, Lebanon, after fleeing the Armenian genocide in Turkey in 1915.

Anouchian’s biography hints at the paradoxical nature of “identity photographs”: there is no absolute referent of identity; the event of the taking the photograph is itself the inscription of an individual into his or her “official” identity. National identities are not constant; they shift in time with individual movements and abstract political forces that redraw boundaries. In the absence of their subjects and the papers they were intended to accompany, the pictures testify only to the stylistic variations of modern material culture and the unchanging standard of the “official” pose. Each image in the grid is individually attached to the wall by Raad and Zaatari, just as each proof print was pasted into the photographic indexes from Studio Soussi in Sidon, a physical manifestation of the photograph’s status as a commodity and the commercial and personal transactions that accompanied the production of official identities.

Photography’s double economic role as livelihood and luxury commodity resurfaces in the montage presentation of “photo surprise,” the practice of photographing pedestrians as they strolled the city and then offering them the opportunity to purchase prints, especially popular in Lebanon from the 1940s to the 1960s. Layering images from Agop Kuyumjian’s Photo Jack Studio in Tripoli’s Tell Square, the videos create a portrait of the city square itself in the 1950s, a lively and prosperous urban scene filled with businessmen, shoppers, and families out for a stroll. Like the narrative of still images in Chris Marker’s La Jetée, the sequencing of photo-surprise images creates an uncanny sense of movement and time. They also produce a portrait of the city itself, as the background of the square remains static amid the shifting images, placing Kuyumjian in the tradition of photographers like Eugene Atget and Charles Marville. Eerily, the photographs become a kind of surveillance, offering a site from which to watch over the movements and events in a particular place, capturing each subject in the act of performing his or her public self.

Parallel to the photo supriseur, the itinerant photographer wandered in and between cities, asking people to pose for pictures, which they would then be able to purchase. Raad and Zaatari chose the work of Hashem el Madani, who walked the same route in Sidon, Lebanon, almost every day and made portraits for regular clients while he searched for new ones. Using the conventions of studio portraiture, Madani photographed his clients in specific, predetermined ways: reclining on the sand or on a rock at the beach, swimming, on a ski lift. In Mapping Sitting, organized into grids categorized by location and pose, a typology is established. Yet rather than presenting each subject as an exemplar of a type, as August Sander attempted in his People of the 20th Century, Madani’s photographs highlight each individual’s unique presentation within a set format. Like the Bechers’ inventory of German industrialization that lays bare difference through repetition, the itinerant photographer’s use of conventional poses and static sites reveals the unnatural, the arbitrary condition of posing, as well as the impossibility of producing the same photograph twice, even while each image is immanently reproducible.

The reception of Mapping Sitting, from the gallery press release to The New York Times review, emphasizes the exhibition as an antidote to contemporary images of Arabs in the Western media and imagination. But that is only the most superficial level on which the photographs operate. Why are these images positive representations to a Western audience? In part because they present subjects that are recognizable, not Other, to the West: the national, bourgeois subject is the model of subjectivity that is repeated and enacted in each of the thousands of photographs present, from the well-pressed soldiers in uniform to the well-dressed shoppers in the square to well-behaved citizens in the empty space of the studio. Allowing us to see what makes a photograph “recognizable,” Mapping Sitting acknowledges photography as a shared tool of modernity while also distinguishing historical and material differences in its operation, leaving behind the two poles of fetishization and demonization of these “others.”

Although the images all in some way attest to the fluid movement of people and technologies in the Middle East, the photographs included are mostly from Lebanon, where both Raad and Zaatari were born. The smiling boy scouts, hurrying shoppers, and proud citizens recount Lebanon’s peculiar status in the Arab world, cosmopolitan and diverse—Western. Popular photographs of recent events in Beirut would seem to pick up right where Anouchian, Kuyumjian, and Madani leave off. The assassination of former Prime Minister Rafik al-Hariri on February 14, 2005, and the ensuing protests have brought Lebanon back into international headlines with images of exuberant yet peaceful attractive young people in jeans and Adidas with political demands that are appealing to the current American administration.

Echoing questions raised by artists like Gerhard Richter and Christian Boltanski, Mapping Sitting uses the structure of the archive and the indexicality of photography to examine the construction of history. But where Richter’s Atlas questions the possibility of historical memory and the operations of repression and erasure in contemporary culture, Raad and Zaatari probe the narratives that photography can and does construct about public identity in a modern culture defined by nation-states, cities, consumption, and movement. A slowly scrolling video of official group portraits of military organizations in Iraq and Egypt creates a sense of the vast anonymity of entering into the structures of national culture that allow individuals to be recognized as political subjects. Or as Barthes lamented, “The ‘private life’ is nothing but that zone of space, of time, where I am not an image, an object. It is my political right to be a subject which I must protect.”

In his landmark essay “The Body and the Archive,” Allan Sekula identified portraiture as the genre most prone to photography’s double system—”a system of representation capable of functioning both honorifically and repressively.” Considering the vastness of the archives of institutional portraiture, passport photos and police photos of criminals and the insane take on a peculiar equivalency. Both types of portraits serve to inscribe their subjects into wider social systems, offering recognition as subject, but a subject who behaves in a proscribed way. The availability of portraiture to a wider audience through photography produced dialectical notions of subjectivity, all of which undermined the traditional function of portrait painting: the ceremonial presentation of the (aristocratic) self.

The text accompanying Mapping Sitting situates these images as political and historical documents, pointing toward a critical reading of the photographs as material traces of broad historical phenomena. “The photographic practices in question are symptomatic of an evolving capitalist organization of labor and its products, and of established conventions of iconic representation,” reads the opening statement. And yet Raad openly acknowledges that Mapping Sitting “asserts a thesis without even trying to prove it”—the exhibition itself slides away from the articulation of coherent and unified meaning into a more elusive and poetical mode. Although photographs as documents are frequently displayed in museums and in books, Mapping Sitting places its historical material in relation to modernist aesthetics and postmodern theorizations of photography without effacing the photographs’ geographic and historical specificity. Rather, it suggests that we should stubbornly insist on the distinctiveness of each instant.