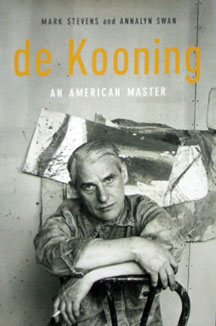 The first full-length biography of Willem de Kooning, by Mark Stevens (art critic for New York magazine) and his wife Annalyn Swan (a former senior arts editor for Newsweek), provides a detailed account of the artist’s professional and personal life, with an emphasis on the reflection and the influence of personal struggles on artistic development. The authors posit that the anxieties driving his artistic sensibility were overcome late in life and are reflected in his work through what he himself termed a merging of the figure and landscape. This thesis is a highly valuable contribution to our understanding of the artist. However, it overwhelms their treatment of other important aspects of de Kooning’s artistic development, including his artistic relationships as well as his involvement with philosophical thought, resulting in an somewhat overly personalized perspective on an artist of great historical importance.

The biography prefaces its discussion of de Kooning’s personal struggles with an in-depth portrayal of his youth in Holland. He was born in 1904, and his early years were dominated by financial hardship and, more important, a tyrannical, psychologically and physically violent mother. The authors write: “All his life he would fear constriction and love the idea of ‘breaking out’ of boxes of style or habit: he would insist upon the convulsive truth of eruption and release. At the same time, he would become a master of indirection, ‘glimpsing’ an intense reality rather than facing it directly—the preference, perhaps, of a child who must often flinch.”

The biography details his early years in America; years of financial and artistic struggle, stressing his laborious yet steady progression toward artistic maturity. De Kooning’s education in the language and tenets of modern art came from his friends, the Armenian-American painter Arshile Gorky and the esoteric European painter John Graham. And from the 1930s on, tremendous anxieties, violent mood swings, and long periods of depression and doubt in the studio generated both his difficulties with intimate relationships and the alcoholism from which he suffered for most of the second half of his life. The authors neither glorify nor damn his alcoholism, arguing that he turned to alcohol in an attempt to both escape his anxieties and free himself from the tight grip of the mundane. But by the 1960s and 1970s his drinking became self-destructive: he would disappear for days, sleep in the gutters of New York City, and after he moved to Long Island, his frequent benders would repeatedly land him in the hospital for detoxification.

Stevens and Swan note that the young de Kooning yearned to paint a picture that embodied the sensibilities of both Jean-Auguste-Dominique Ingres and Chaim Soutine. He gradually developed a belief in the importance of the tension of opposites in works of art too. Later, a studio assistant describes his insistence that a work not look “too easy” and calls this his “contradictory logic.” His daughter Lisa’s friend, the artist Joan Levy, noted that even in the 1970s de Kooning still fought for his paintings, talking about his struggle with what he called “the anxiety of possibilities” and his efforts at painting something while “trying not to paint it.”

An avid reader of the works of philosophers like Friedrich Nietzsche, Søren Kierkegaard, Jean-Paul Sartre, and later Ludwig Wittgenstein, de Kooning once said “an artist is like a homespun philosopher” according to a recollection by his friend the artist Mary Abbott. The overall treatment of the artist’s involvement with philosophical thought is often disappointingly cursory, but their description of the importance of existentialism to the burgeoning New York School and to de Kooning’s work in particular is highly attuned, as in the analysis of “Woman I” (1950–1952) as a painting that has “no reassuring settlement, finally, of any of the modern dilemmas,” and in this heightened state of irresolution, “his ‘personal mark’ had shredded the cubist grid; the grid, in turn, became a rattling and imperfect cage.” Furthermore, Stevens and Swan point out that despite de Kooning’s vehement belief in the expression of the individual self, his commitment to the importance of what they term the “impurities of life” and the “assault on taste” resulted in his opposition (from the 1940s through the 1960s) to the late modern trend toward the transcendent and the mythic. Even at his most successful, the artist is portrayed as pulling away from the crowd.

Stevens and Swan try to cover all the stages of de Kooning’s mature work, and they implicitly link his romantic relationships with bursts of creative output and shifts in style. For instance, they argue that his courtship of Elaine Fried is reflected his early seductively soaring abstractions (e.g., “Pink Angels,” c. 1945), the failure of his marriage to Elaine in the series of black-and-white abstractions with which he first achieved critical success (e.g., “Excavation,” 1950), the beginnings of his long-term on-again, off-again relationship with Joan Ward in his first series of Woman paintings, and his relationship with the flashy, spotlight-seeking Ruth Kligman in what the authors call his “imperial style” (e.g., “Ruth’s Zowie,” 1957, and the masterpiece “Door to the River,” 1960, arguably the grandest work of his entire oeuvre).

De Kooning moved to Springs, Long Island, in 1963, returning to Ward and the Woman series, and began building an enormous light-filled studio in the midst of a landscape that reminded him of Holland. “I’ve fallen in love with nature,” he commented. “I see things in nature very well. I’ve got a good eye for them, and they look back at me.” The new series of Woman paintings became more sensual but were still subtly fraught. He left Ward again for the younger and gentler Susan Brockman, at which point his Woman paintings alternated between a calmer sensuality and a violent erotic manner (e.g., “Woman,” “Sag Harbor,” 1964). It was at this stage, the authors argue, that he began to search for a means of unifying the figure and the landscape. The end of the Brockman relationship was followed by years of relative isolation, and the imagery in his Woman paintings merged a kind of watery, visceral eroticism with a “tugging” violence (e.g., “The Visit,” c. 1966–67). “The unsettling power of the pictures —and their originality—lay in their way of mimicking the sexual act itself,” the authors write. “[T]he visceral touch of de Kooning’s brush could almost be the sexual stroke of a man’s hand.…No detachment from the object of desire existed in these pictures.”

Stevens and Swan cite an important shift in the painter’s evolution in the late 1970s. Inspired by a combination of his experiences of Sumi painting and Japanese culture during a trip to Japan in 1970, his work sculpting in clay (begun during a trip to Italy in 1969), and a last and great love affair with Emilie Kilgore, a spiritual longing for the “transcendent pastoral unity” of figure and landscape overcame the constant resurgence of violence and doubt that had driven his creativity for years. De Kooning’s signature brushstroke, referred to as “whipping,” “idiosyncratic,” and “bending,” and his “supple layering of space” became a means toward intimate revelation and oneness with his subject. “The way I do it, it’s not like Cubism, it’s like Cézannism, almost,” said the artist. In a love letter to Kilgore he wrote, “I was on my bike to the bay, and had a look at the back of your neck there.” The lovers’ discussions apparently often focused on a kind of epiphany the artist felt he was living in which “the evanescent sensations of a long life seem to come together.” With the luscious paintings of the late 1970s, the majority of which are completely abstract and horizontal in format, de Kooning arrived at a “pastoral from within—from the perspective of the figures in the landscape—rather than from without. He was not the outsider who surveys the ideal scene from afar. He had passed through the looking glass; he created as he put it, ‘a feeling of being on the other side of nature.’ “

The late ribbon paintings are then presented as the natural outcome of this transition. Cited in the biography is a revealing 1981 exchange in which Joan Levy responds to the earliest ribbon paintings, saying, “They’re so ethereal. It looks like you died and went to heaven.” And he replies, “Yes, that is what I was going for.” Stevens and Swan recount his excruciatingly slow mental deterioration due to Alzheimer’s disease, which began in the mid-1980s, noting that it was only in his final few years of painting that he needed such a large amount of assistance that we begin to question which paintings are wholly his own. During his last years de Kooning could no longer paint. He died in 1997 at the age of 92.

This new biography offers a description of de Kooning’s changing content, from the angst-driven paintings of the 1940s and 1950s, through the irreverent and bawdy work of the 1960s, to the lyrically sublime paintings of the 1970s and 1980s, juxtaposed with a detailed account of his personal struggles, that is of great value. Perhaps inevitably, the authors fall short of revealing the full depth and scope of the painter’s contribution because of their relatively cursory treatment of de Kooning’s position relative to larger artistic developments. However that may be, de Kooning: An American Master is a tremendous contribution to our understanding of a great artist.

Deirdre Swords is an artist (painter and sculptor) living and working in Red Hook, Brooklyn. She has shown her work recently in group shows at Sideshow Gallery and Diamantina Gallery (both in Brooklyn). She also teaches sculpture and drawing at Haverford College.

It’s been 22 years since Willem de Kooning’s death at 93. His long and prodigiously productive career was lately most fully examined in a retrospective held between 2011–12 at MoMA.