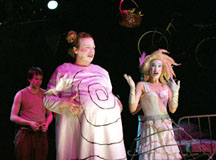 “Merdre!” The audience at the premiere of Alfred Jarry’s Ubu roi wouldn’t let the performance get beyond its scatological opening word before a riot broke loose, making December 20, 1896 (the night the play premiered at the Théâtre de l’Oeuvre in Paris) the birth date of the theatrical avant-garde. Exploding the conventions of melodrama, realism, and symbolism alike, it was immediately perceived as an act of literary and theatrical revolution, leading W.B. Yeats (who was in the audience that night) to famously lament, “after us the Savage God.”

If Ibsen and Strindberg share the title of father of modern drama, Jarry is surely the father of their experimental grandchildren; Artaud named his first theater after him, and Ionesco was a member of the College of Pataphysics, a society dedicated to Jarry and his philosophy. Although Jarry died drugged out and destitute, Ubu reigns as king of the experimental stage, an oversize Id waving a toilet brush as a scepter. Ubu’s vulgarity and stylized violence establish a precedent for an irrational exuberance that emancipates the stage.

But the musical? Despite Broadway’s absurdities, Jarry’s influence cannot be seen there, for his assault on conventions of all kinds is antithetical to the industry. And that makes Jabu such an interesting experiment in theatrical form. Having already secured her place in the history of the theatrical avant-garde, writer-composer-director Elizabeth Swados is most well known for her musical collaboration with director Andrei Serban on Fragments of a Greek Trilogy (originally produced in 1974 and revived numerous times since). The Obie-winning, Tony-nominated Swados is surely among the few who could adapt Ubu roi as a musical and have it not become a travesty, but the daring doesn’t stop there, as she attempts to tease out the story of Jarry and his Ubu in the form of a musical that remains true to Jarry’s proto-absurdist life and/as style, what she suggests in her program note could be called a “patamusical.”

The overlapping of time and style are foreshadowed in the prologue by Jarry himself (Matt Wilson finding a staccato rhythm in English to mimic Jarry’s legendary conversational style), as it is unclear whether he is introducing Ubu or Jabu when he concedes important parts of the plot have been excised in rehearsal, and the actors are displeased with their costumes. We only get one word (“Pa-shit”) into Ubu before the cast break into an opening number that matches the finest singing and dancing of the Great White Way, giving devotees of Jarry great cause for alarm, making us wonder: What’s so off-off-Broadway about this production other than its stage in Tribeca? After the opening week matinee, Swados explains, “If you’re going to do an alternative to something, you’d better be able to do the thing itself.”

Indeed, those initial fears (or guilty pleasures) are quickly assuaged when Pa and Ma Ubu appear (played boldly by Kevin T. Moore and Nicola Barber). As the mode of presentation shifts to that used by Jarry at the premiere of Ubu (in terms of costume, props, and acting style), the effect is not anywhere near as explosive as it was in 1896; still, the contrast with the techniques that dominate today’s major (commercial) stages is jarring. But just as one is intoxicated by Ubu’s world, a narrator kills the buzz.

Despite his infamous misogyny, Jarry’s most devoted friend was the novelist Rachilde, the wife of his publisher Alfred Valette. Played by Danielle Levanas, Madame de Rachilde lectures the audience on their artistic milieu and the details of Jarry’s life, especially his rise to celebrity and his descent into death, through the use of alcohol, then absinthe, and finally ether. Despite her fascination for this brilliant “animal,” Rachilde provides not only a narrative, but also a moral focus for Jabu.

This serves as a restraint on what is an otherwise wild (though intensely disciplined) production. One sympathizes with Ubu when he complains, behind the narrator’s back, “Bitch! She’s always interrupting!” Rachilde’s addresses to the audience seem too much of an acceptable narrative convention, and though informative, they secure the plot in a way that compromises the spirit of Jarry.

The refusal of convention can all too easily become another convention, and the pretensions of the avant-garde are an even easier target than the Broadway musical for parody. The interplay of scenes from Jarry and his Ubu is further disrupted by the hilarious pomposity of Flabo and Flabette (Parrish Hurley and Meredith Holzman), a black-clad performance-artist duo who attempt to represent pataphysics. In one scene, Flabo strips and smears himself with chocolate (claiming it’s shit), then turns to reveal “avant” and “garde” written on the left and right cheeks of his ass.

This isn’t the only eruption of contemporary cynicism, as shots are fired at both the aesthetic left and the political right. Swados does not sway from the identification of Ubu with George W. Indeed, Moore’s Ubu breaks into Texas twang, claiming a mandate and threatening to take away social security. In the most startling image of the production, the debraining scene from act III, scene ii of Jarry’s play becomes the song, “Debraining Machine,” which ends with the Polish nobles covered in black hoods, Ubu posing among them for a photo. Swados defends the lifting of the Abu Ghraib image, claiming “It’s essential so that we understand how far this kind of stuff goes, and that we’re completely capable of this. We’re capable of being Ubu.”

Broadway should be this good, if only it would repent and worship such a Savage God. It wouldn’t be surprising if any of this splendidly talented cast are seduced uptown to those big lights, but the hope is that Jarry’s example will inspire new theatrical paths toward ecstasy, some new savagery. Claims Swados, “I long for the kind of incredible daring of certain times in the theater. This is not that time. This is a time where everybody is writing for cable or movies when they’re writing on stage. I hate to be that way. I don’t mean to be negative, but I don’t see people ... causing trouble. I wanted to celebrate that.”

Jabu is indeed a celebration of theatrical daring, Swados’s homage to a Savage God who might well be dying. And so if Jabu can be seen as a warning, it is not so much of the dangers of drugs or of fascistic narcissism, but of the failure of theater in our own time to remain avant-garde and to preserve its revolutionary fervor. Right now, on and off and off-off-Broadway, there’s too much shit.

Isn’t power a drag? Isn’t it a show, a performance replete with costumes and character roles and play-acted identities? The artist Andrew LaMar Hopkins has mastered this strange dance between power, performance, and play.

Diary of a Foreigner in Paris

by Curzio Malaparte, translated from the Italian and French by Stephen Twilley

December 19. Last night I had the same dream I’ve had every so often for years. My mother enters my room at night and says to me in a hoarse voice, “Stop working, you’re tired. Go to sleep.” I look at her. She’s pale, and smiles. Then she gets up and withdraws, leaving her white hand behind on my desk. I get up and take the heavy, dead hand, open the window, and throw it out.