Jackson Mac Low died in December, a central figure in the international art community. He worked tirelessly inventing new forms and procedures and invited others to do likewise, invigorating our culture for his whole long life. 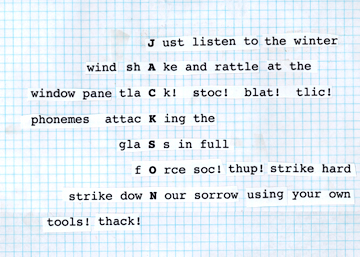 Alison Knowles is one of the original members of Fluxus. She has worked continually since then as a visual artist, doing sound works for radio, performances and installations. She has authored a number of books and articles. As poet and writer, she continues to expand the spirit of Fluxus in her recent work.

A critical study of the Black woman as a multidimensional figure in film, the screenplay is a unique accompanying text to the film. It highlights the sharpness of the dialogue, while adding clarity and balance to the scene work.

In the combat between weightlessness and force, the winner is left ambiguous: are the hands guardians of affably soft columns or do they clutch the helpless anchors to destroy? Searching for an answer is futile, and settling for humor is suggested.

In Miami, the largest gathering of Didier William’s work yet to be assembled took place. Years of conversations and studio visits with Dr. Erica Moiah James led to a selection of paintings and prints that convey a passage of artistic evolution. The passage is concerned with the figure. Twenty years ago William had been exploring abstract compositions until the murder of Trayvon Martin compelled a new direction. This exhibition begins at that moment and concludes at its chronological counterpart: the birth of a child and the formation of a family.