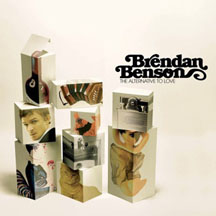 Heir to a long legacy of gifted singer-songwriters, Brendan Benson writes smart pop. You won’t find bubblegum hooks here, but his songs are definitely catchy. They insinuate themselves into your brain: Two days after hearing one you’ll find yourself humming the refrain to yourself. And fans have had a lot of time to hum refrains from his last universally applauded album, Lapalco, which was released nearly three years ago. With the release of The Alternative to Love, they now have twelve new songs to hum along with. And how good are these new songs? Pretty superb. Alternative is a solid, complete, honest record, which nowadays is more than enough. Brendan’s sophomore full-length release is a hit.

Kicking off the album is “Spit It Out,” full of spirit and guitars, not to mention a great wailing chorus. There’s a more beautiful chorus on “Cold Hands Warm Heart,” which—despite the corny title—is a sweet, groove-y number that sways its way along. “I Feel Like Myself Again” is a told-you-so grinder that, with its rising refrain, exudes hope. And the title track is a winner, with textured layers of vocals, quick catchy lyrics, and a beautiful melody. This is perfect pop.

Then comes the second half of the CD, and what a powerful second side it is. “Pledge of Allegiance” is an homage to the Ronettes (“Be my, be my, be my little baby”) that could have ended up a complete fiasco but is instead a powerful, confident performance. Following that is “Them and Me,” an honest, straightforward song, stripped down to the bare bones—and yet oddly melodic in the most beautiful way—asking for something real, something more from the person he’s singing to (either someone else or maybe himself): “What can you show me that I haven’t already seen before/You can’t really know me when one foot’s in and one foot’s out the door.” It is a gorgeously haunting tune. The piano-dominated “Biggest Fan” is muted with tension, yet builds ever so slightly into a toe-tapping cacophony of melodies. “Flesh and Bone” and “What I’m Looking For” are particular favorites of mine—strong and moving. 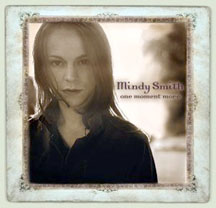 Calexico, the Pretenders, and the Cars are referenced in Brendan’s press release as influences, but his old friends the Beatles aren’t forgotten about either, though their presence isn’t overpowering. This album feels like Brendan is finally letting go of something he’s been holding on to or chasing after, as if he’s starting to be himself again after a long time and having a great time doing it.

2. “You have angels that dance around your shoulder”

There are two things I learned listening to this album: Though she now lives in Nashville, the new darling of country music is a Long Island native, and though I don’t listen to country music, I need to pay more attention. One Moment More deserves a listen because I think Mindy Smith might be an angel.

It’s worth your time for—at the very least—the two tracks that bookend the album, “Come to Jesus” and “Jolene.” These two songs are tinged with shadows and despair and reflect this young performer’s depth. “Come to Jesus” is a plea sung over a deceptively plain acoustic guitar, and this Appalachian-flavored song will appeal to even us nonbelievers in the blue states, especially when Mindy launches into the swelling (and haunting) brimstone chorus of “Worry not, my daughters/Worry not, my sons/Child, when life don’t seem worth living/Come to Jesus and let him hold you in his arms.” Talk about strength in a voice! Talk about being ready for the shivers! Be ready to hit the repeat button—this song is ridiculously good.

“Jolene” is a remake of a Dolly Parton song that is so successful that Dolly herself asked to sing backup on it. The song is a story of a woman pleading with another not to take her man; the soaring vocals reach into your heart and then pull it out as the name Jolene is sung over and over until it becomes a mantra. It’s not every day that a twentysomething can compete and even hold her own with the likes of a powerhouse voice like Dolly’s, but Mindy pulls it off effortlessly.

And that is the most obvious MVP on this album: Mindy’s voice—gravelly, light, airy, sweet, and powerful as all get-out. She has range and honey sweetness and raw emotion; she leaves herself on the field after every play—there’s no halfway for her. The other songs on the album don’t disappoint either, though they are more traditional and quieter. They don’t pretend to be anything they’re not, and consequently come off as very honest. Good as the album is, though, it would be nice if there were more biting songs like the bookend tracks to balance things out a bit, because it’s on those that Mindy shows her tremendous strength. However, taken as whole, this album—based around her voice and some beautiful songwriting—plays like a picnic on a nice spring afternoon, one glorious moment at a time.

Glitch Feminism was published during a bleak year of pandemics and political upheaval. As reactionary political and social forces encourage inertia, or even try to undo the dreams of change, this manifesto is a voice for hope.