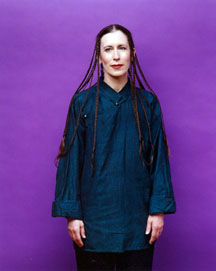 The newest strand in Meredith Monk’s endless creative braid is the string quartet Stringsongs, commissioned by the Kronos Quartet, which had its United States premiere at Zankel Hall on February 5. Consisting of four movements, the work offered a distillation of different phases from Monk’s formidable musical oeuvre, which has intertwined with performance, dance, choreography, opera, and film projects and garnered many awards, including a MacArthur, two Guggenheims, and a bevy of honorary doctorates. Monk approached this quartet not as a traditional composer would, by using advanced theoretical methods, but as an experimental expounder of the endless possibilities of breath and voice. Her approach to the violin and cello was likewise different from a traditionally schooled composer’s, focusing on the vibrato, sonorance, and pitch of the instruments’ strings and wooden bodies. Using this perspective she developed the movements’ nuances.

The Kronos Quartet, which has released over forty recordings and won a 2004 Grammy for chamber music,  has noticeably mellowed in recent years, their rock-star glamour replaced with a seamless fluidity and ease. Crackerjack timing, always their strong point, is still there, but the contrapuntal violence between beats and measures has softened. The nuances of their lush sound were accentuated in Zankel Hall, an intimate, acoustically precise venue.

“Cliff Light,” the first movement, employed traditional optimistic themes from the American Southwest, a reflection of its being written in the pristine light and aboriginal terrain of New Mexico. It evoked a scenario of modern dancers hopping around à la Martha Graham, though no dancers were actually present. Monk, who often incorporates dance movements into her pieces, carries in her compositional structure the lingering whiff of motion, like the trace of perfume left behind by a mysterious woman who has just exited through a revolving door.

“Tendrils,” the Eastern European–flavored second movement, felt worried, as if the optimism of sunlight had become tinged with somber reflections of the night. “Obsidian Chorale,” the third movement, broke from the previous ones to employ Monk’s better-known signature phrasing, making use of undulating scales and trills, which she first employed back in the l970s. The bounce of the horsehair bow on the instruments’ metal strings turned into the whistle of wind and air, then back again into elemental string. The phrasing became wistful, and the violins sounded astonishingly like oboes and clarinets. There was a sense of sway, and then the instruments deepened their tones even more to sound like organ pipes. This give-and-take became an abstracted modern call-and-response session that was at once “primitive” and postmodern.

“Phantom Strings,” Stringsongs’ final section, was the most subtle and complex of the four movements. It emphasized the fact that strings were indeed string, vibrating with pitch on demand, but with pacing that was slow and languorous. The sawing motion of simple bowing turned the sound into musical bellows that inhaled and exhaled. David Harrington’s violin solo emulated Monk’s own vocabulary of voice, and the piece became the song of life’s breath breathing itself.

Shaun Leonardo’s current exhibition posits a simple act of resistance: to excavate these optical memories, sifting through their noise. In his repeated drawings of news photographs surrounding violence against Black men, Leonardo builds a system that questions a singular image’s capacity for truth-telling.

Live performances around the city this month.