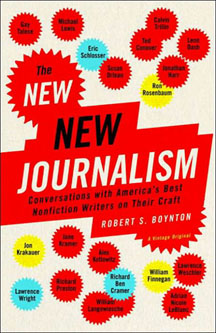 Journalism at its best is art, a literature of the most wantonly eclectic and rapacious style. I am talking here about feature writing, good stories in which all the best methods and sensibilities of social science are looted and mixed with all the best narrative flow, character building, and sublime insights of fiction. This is the cocktail that was New Journalism in the 1960s, which was associated with Tom Wolfe, the late Hunter S. Thompson, Gay Talese, and what was then called “the underground press.” That form has since matured into the better nonfiction writing of today. Now there is even some good writing about the genre itself, most notably Robert Boynton’s book The New New Journalism: Conversations with America’s Best Nonfiction Writers on Their Craft.

After first reviewing the history of New Journalism, Boynton’s book then unfolds as a series of conversations. A few are with greats from the ’60s, but the bulk of the literary scions are the leading feature writers and journalistic authors of the last two decades. Among those prominently featured in the book of interviews, each of which is accompanied by a useful introductory essay, are Ted Conover, Jon Krakauer, Eric Schlosser, William Finnegan, and Adrian Nicole LeBlanc.

Boynton’s conversations are about content, method, and form—and for many of his subjects, form is content. Boynton’s method offers a rare and quite nice example of asking simple questions about the complex task of good reporting and writing.

First and foremost this craft is about experiential research: these reporters do what is called immersion journalism, an ethnographic style of reporting that focuses as much on feelings and prosaic detail as it does on recording important facts. Jon Krakauer thus joins an expedition to Everest and notes the spent oxygen tanks and other creepy detritus littering the last leg of the summit. Ted Conover goes to jail, as a guard, and conveys the mind-numbing boredom of opening and closing cages. Adrian Nicole LeBlanc does research with a family in the South Bronx that lasts a decade, work that would surely qualify as full-fledged ethnography.

And why is it done? In the best of cases, questions of justice and fairness and human empathy guide the work. Like previous greats from the ’60s, as well as from the muckraking era, these writers are drawn to questions of suffering and exploitation. And their work often provides a subtle but powerful humanization of the excluded and forgotten. At the same time, the interviews humanize the craftspeople by getting down to the real nitty-gritty, like who uses ballpoint pens and who uses tape recorders.

This book of course appeals to the Rail, because we encourage writers to experiment with methods and style; and for anyone thinking of pitching us stories, this book might be an inspiration, full of useful tips. But really for any journalist, “new” or otherwise, this book serves as a necessary reminder that what we do is both an art and a craft.

Rejecting the urge to erase, minimize, or turn away from an unsightly feeling, the writers included in this anthology audaciously inhabit a sentiment that society exhorts its high-functioning citizenry to disown. The beautiful, weird aggregate that results is profoundly, pathetically human.