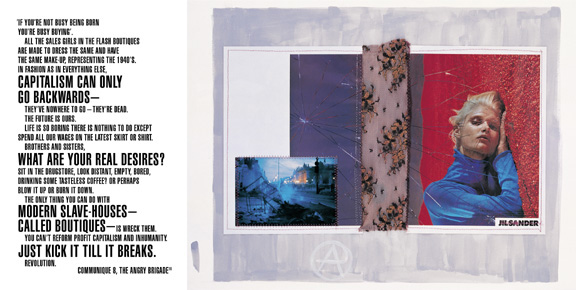 Fashion and politics. Style and revolution. We have emerged from a century of fascism on the runway and the campaign trail. We vote, we buy, based on our own shallowest experience of who we are. We worship our spiritual death in domestic consumerism and actual death abroad. As the publisher of the infamous Fat Magazine, German-born artist Josephine Meckseper has deftly applied tabloid publishing to high culture. In Printed Matter’s The Josephine Meckseper Catalogue, Meckseper adopts the guise of the fashion magazine, with film stills and photographs of recent protests in the United States and Germany (2001–2004) set forth as advertisements, and “feature articles” based on new sculpture, painting, and installations by the artist that offer visions of capitalist Utopia.

“Non Ti Schiantare”—On the Road to Rome and Fascism

A hundred years after Mussolini’s March on Rome, Italy is once again asserting itself as a laboratory of the Western world, with a party directly descended from historic fascism headed for power. Faced with this situation, a Calabrian writer friend recently invited us to come and learn from his people of Aspromonte. These descendants of shepherds and Greek philosophers of millenia past have an saying redolent of centuries of resistance to colonization in the north of Italy: “non ti schiantare”—“don’t be afraid.”

She is the toast of Havana, a wealthy courtesan who consorts with presidents and generals, who owns numerous houses and nine splendid automobiles, which she drives herself (she is said to be first woman in Cuba to possess a driver’s license).

Art of the Cuban Revolution