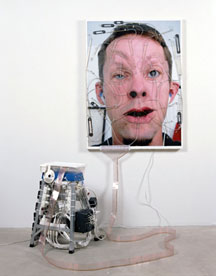 For the past twenty years, Tim Hawkinson has been part of a larger movement in art concerned with transforming everyday materials into radically new forms, both abstract and representational. His immediate peers are Tom Friedman and Tara Donovan, both of whom share his obsessive craftsmanship. Despite some striking similarities in their practices, however, Hawkinson’s work has always been harder to grasp. While Friedman’s work comes the closest to paralleling Hawkinson’s incredible displays of will, Donovan’s body of work seems to be more about creating almost living organic forms. Hawkinson and Friedman both seem to be after impossible totalities, such as a complete world history or dictionary. Their work often involves exhausting displays of skill to create detailed illusions out of improbable materials.

What distinguishes Hawkinson’s art from Friedman and Donovan is his mechanical sculpture, works that produce music, words, and expressions. Hawkinson incorporates another layer of mind-boggling complexity, where Freidman plays purely conceptual games that suggest the metaphysical. Hawkinson gives each of his ideas physical forms on the model of closed, circular systems of information, like a record or a body, that remain resolutely material. While Hawkinson uses some Christian references in his work, they are hardly spiritual or critical in nature. Catalogue contributor Howard N. Fox suggests in his essay that Hawkinson is “speaking in tongues” or trying to channel the metaphysical through his machines. What this ignores is the deeply materialistic undercurrent that his found programs, random patterns, and analog computers suggest about life itself.

The awe-inspiring exhibition at the Whitney is presented as a loop, beginning with the monumental “Pentecost” (1999) and nominally ending with “Drip” (2002). The giant “Überorgan” (2000), a similarly structured musical device, is on display at the Sculpture Garden, and its absence gives the rest of his oeuvre breathing room. The formal structure of the show mirrors Nietzsche’s idea of the “eternal return,” where Hawkinson’s ideas and forms resurface through his relentless experimentation. All the artist’s mechanical works are connected by a continuous series of extension cords that snake above the exhibition, which occasionally twist into patterns, as in “Knot,” and forms, as in “Shorts.” Throughout each room of the show, Hawkinson’s works are presented out of chronological development to make their recurrences visible and explicit.

The ideas or variables that Hawkinson puts into play into are the body, time, illusion, and music. These ideas are in constant flux throughout as Hawkinson deals with mortality, history, and, of course, spirituality. The entire exhibit gives one the sense that he, like his complex creations, is absorbed by the question of self-knowledge. The answer, though, is neither exactly comforting nor divine, as Fox implies. The self-consuming loop of intestines in “Wall Chart of World History from Earliest Times to the Present” (1997), an incredibly dense and complicated intestinal tract that reads like a map of the body of the world, suggests the nonlinear nature of events in sharp contrast to a conception of history as a tidy linear progression. “H.M.S.O” (1995) is perhaps the most explicit representation of Hawkinson’s philosophical perspective. The looping wooden ship is an imperfect oval of masts, sails, and rigging that consumes itself without beginning or end. It’s an impressive articulation of the cyclical nature of history, and its labor-intensive craftsmanship gives it something of an outsider-art quality. The act of building the ship by hand with simple tools puts Hawkinson at odds with mechanical reproduction. He appears to compete with “progress” and the digital age with simple analog materials. His incredible acts of will threaten to overwhelm the objects themselves. His idea that the enjoyment of experimentation and uncertainty can overcome the impossibility, achieving self-knowledge through a type of play, is an intriguing way of understanding Hawkinson’s morbid sense of humor and fascination with his body.

There are innumerable works in the show that both depict and explore the artist’s uncertainty about the possibility of self-knowledge. The carefully grouped works “Self-portrait (Height Determined by Weight)” (1990), “Humongolous” (1995), and the hilarious “Penitent” (1994) capture this complexity. In the first two works, Hawkinson portrays his body through scientific forms of observation—casting his body from the feet up until he reached his weight in lead and painting his skin in proportion to its direct visibility to his eye—and calling into question the objectivity of such scientific observation. While the former is a funny pun and the latter is a formally unique presentation of a body, they lack the pathos of “Penitent.” Kneeling inside a cut-out prayer booth, Hawkinson presents a whistling skeleton made out of rawhide dog chews, and the irreverent humor veers away from the analytic approach and into the metaphysical.

The inescapable passage of time is suggested by his series of hidden clocks and his century clock “Spin Sink (1 Rev./100 years)” (1995). While the series of small clocks, camouflaged as details of everyday objects like toothpaste and hairbrushes, do not appear like serious meditations, they suggest Hawkinson’s morbid fascination with the passage of time. The larger and more solemn “Spin Sink” is an ingenious and relatively simple mechanical sculpture, but the physical manifestation of the scale of time is a stunning moment in the show. In relationship to the vast numbers of self-portraits and figures presented throughout, “Spin Sink” casts a shadow over the delight that much of his work conjures.

“Emoter,” a 2-D mechanical facial puppet whose expressions are dictated by random patterns of light from a television, suggests another struggle with self-knowledge: here Hawkinson attributes the appearance of consciousness to the firing of electrical impulses. The artist’s expressions, which are familiar signs of consciousness, are dictated at random in an unpredictable manner.  In “Signature” (1993) Hawkinson seems almost ready to admit that he is not even a prerequisite for the work. The analog signature machine translates his physical gesture into a literal motion record. The brilliantly constructed device signs the artist’s name in ballpoint pen on an antique school desk and drops the sheets to the floor. The machine reduces the artist almost completely to his creative will, where the only sign of his body is the gesture of his signature, which is reduced to the scribbling arm of a mechanical device operating according to a set program, partially summing up Hawkinson’s dialogue with materialism and metaphysics. Hawkinson’s answer to the philosophical problem appears to be the devices themselves. He asks the question “What am I?” and his answer is perhaps “An idea.”

If there is something of an underlying morbidity in Hawkinson’s art, it is countered by the poetry of his three large-scale mechanical sculptures, “Pentecost,” “Überorgan,” and “Drip,” which involve the three elemental substances of earth, air, and water. They incorporate his ideas about history, time, and self into strange physical structures that overwhelm reason and logic with their sheer creativity. These three musical devices play rhythms from the artist’s homemade piano players through branching, treelike structures. They are transcendent expressions of Hawkinson’s creative genius that surpass the visual games of his minor sculptures like “Shatter” (2002) or “Magdalan” (2003), both present in the last room of the exhibition. “Drip,” the most recent sculpture, is also the most removed from his concerns with the body: the treelike armature composed of plastic bags alludes to the natural world without a direct figurative reference. Its water-based system taps out rhythms generated by a homemade player piano that turns off and on with a motion detector. Oddly, the piece doesn’t rely on any perceptual games like his series of clocks, which suggest the inescapable passage of time, to create its impact. The piece is a straightforward and brilliantly constructed system that animates familiar, everyday objects into living organisms. Like the ever-present power supply, Hawkinson infuses his works with an invisible energy—call it will, creativity, genius—that demonstrates that the importance of understanding consciousness is less crucial than how it is used. Ultimately, all of Hawkinson’s philosophical questions give way to beautiful, unique answers.

Phyllis Stephens: The Movement of Material

Stephens, a fifth-generation quiltmaker, prayed and subsequently investigated the art of dance to bring her ten-work exhibition to life. In each tapestry, Black men and women dance, either alone or in pairs, indoors or outdoors, always fully engaged with their surroundings and emotions.

Julian Schnabel’s inventive exuberance shows no signs of flagging. Whether harvesting the awnings from the stands of fruit vendors in Troncones, Mexico, where these paintings were made, and transforming the irregular shapes into spectacularly asymmetrical shaped canvases, or, as here, using velvet as his surface, he finds ways to impose his abstract will on whatever medium he chooses.