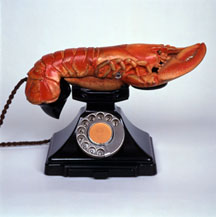 Salvador Dalí is the subject of a major retrospective, the largest ever of his work, including his best paintings drawn from public and private collections, organized by the Philadelphia Museum of Art and the Palazzo Grassi, Venice, on the occasion of the centenary of the artist’s birth. A substantial catalog (600 pages with over 300 illustrations, published by Rizzoli) accompanies the exhibition, a virtual encyclopedia of names and techniques employed by the artist, including selected writings, a chronology, and numerous photographs and memorabilia.

It was at the Philadelphia Museum that a 1941 exhibit of more than 400 examples of advertising art featured some conspicuous works by the surrealist master. His efforts along these lines eventually included a jewelry ad that appeared in Vogue as well as various clothing designs and covers for automobiles. His influence extended with the hats, elegant dresses, and decorations he devised in September 1941 for a fancy dress ball entitled “Surrealist Night in an Enchanted Forest,” which took place at New York City’s Del Monte Hotel to raise funds for the Museum of Modern Art and the rescue of surrealist artists from wartime Europe. At that memorable ball, Dalí wore a black net dress, a satin-finished jacket, a flower behind his ear, and a mask with two faces. He and his wife and muse Gala, who wore a heavy horse’s head, curled up on a bed of red velvet at the head of the table. The passing of more than six decades finds public interest in Salvador Dalí’s art steadily increasing, as the throngs crowding the entrance to the museum retrospective attest. The exhibition is organized chronologically, beginning with the earlier examples of realism, cubism, and post-expressionism and dating from the time of the artist’s schooling in Madrid.

Salvador Dalí was born on May 11, 1904, in Figueres, Spain, and at an early age became a talented illustrator. At twenty-five, he found himself at the center of the surrealist movement in Madrid, Barcelona, and Paris, already having collaborated with the young Luis Buñuel on two surrealist, anticlerical films, Un Chien Andalou (1928) and L’Age d’or (1930), both banned in Europe for almost fifty years. Dalí went to Paris in 1928, where he met Picasso and Miró, and Andre Breton predicted that with Dalí, all the great “mental windows” were opening to surrealism in fashion, theater, and cinema. In the early 1930s, Dalí painted a series of extraordinary works, including “The Persistence of Memory,” “The Invisible Man,” and “Illuminated Pleasures”—symbolic images that have since come to epitomize “layman surrealism.” His miniaturist technique, almost photographic, was all the rage at that time.

One of his most recognizable and controversial paintings is “Soft Construction with Boiled Beans: Premonition of Civil War” from 1936, with its flair for detail as gruesome as it is meticulous. Dalí’s painting style, according to guest curator and Dalí scholar Dawn Ades, might well have been invented for the depiction of the horrors of the Spanish Civil War. Like Picasso’s “Guernica,” painted a year later, it addresses the hatred and destruction that followed Franco’s military coup against the democratically elected government of the second Spanish Republic. However, there are fundamental differences. Picasso publicly sided with the Republican forces and sought to convey the carnage inflicted upon the Basque town of Guernica. Dalí’s message, on the other hand, is far more ambiguous and apolitical, reflecting his belief that Spanish civil conflict was “a phenomenon of natural history.”

“Raphaelesque Head Exploding” (1951) is among the first of Dalí’s paintings to completely fracture its subject into a myriad of particles suggesting both Raphael’s head and the head of the Madonna. From then on, many of his masterpieces, such as “The Persistence of Memory,” depict disintegrated cubes and elemental particles. Other notable works in this vein are “Head Bombarded with Grains of Wheat” (1954) and “Paranoiac Critical Study of Vermeer’s ‘Lacemaker’ “ (1954–1955).

Dalí drew inspiration from rotten fish and Vermeer’s “Lacemaker” to enter his “rhinocerontic” period. In his diary in 1952, he described his spiritual subversion as influenced by Nietzsche’s writings. During this time, Dalí was put in jail in Gerona, and one of his paintings was rejected as obscene in an exhibition in Barcelona. This prompted a barrage of insulting letters written by Dalí and cosigned by Buñuel to the most distinguished cultural personalities in Spain. Paul Eluard had named the infamous painting “The Lugubrious Game,” but most of the viewers were scandalized by the scatological and anal elements. Although Gala was the first to warn him that he risked disdain or worse, his Nietzschean stubbornness helped him to turn a deaf ear. He took surrealistic symbols to heart, neglecting neither the blood nor excrements nor putrefaction on which the movement’s advocates fed their diatribes.

In defense of Dalí’s art against the critics still hung up on his commercial slyness, who proclaim him the King of Kitsch, I say that his illustrations of Lautrémont’s Les Chants de Maldoror (1934, 1973) are his significant contribution to surrealist illustration. The text of Les Chants de Maldoror was printed in 1869 but held out of distribution for fear of censorship. The book was not distributed until the author’s death at twenty-four in 1870. In Paris, Skira Publishers printed forty-two Dalí illustrations with the French text in 1934 in an edition of 200. In this suite of etchings, there is a central image composed of human or anthropomorphized assemblages, diverse elements in an Arcimboldo-like composition of organic forms. They are moribund, limpid, often with an anamorphic skull and the usual Dalí symbols—piano, crutches, forks and spoons, soft watches, a sewing machine. His vision gave birth to some of the most original illustrations in the history of surrealism.

In the “Madonna of Port Lligat” he makes explicit reference to Piero della Francesca’s “Brera Virgin”; however, there is an ambiguous undertone in Dalí’s deployment of Gala as a devotional image, and objects floating in space refer to the dematerialization of the theory of the atom, what Dalí called “today’s counterpart of divine gravitation.” In this way, Christianity and science become potential partners. “Dalí made the two last great mysteries of life his subject,” says Dawn Ades: the human mind and the structure of the physical universe. His postwar paintings are philosophical and psychological uncertainties that drive metaphysical and scientific investigation. As such, Dalí made hidden structures and invisible forces visible and created in the process a specific visual language that distended and questioned day-to-day reality, developing a dense metaphorical iconography.

Another lesser-known aspect of Dalí’s work examined here is his experiments, marked by technical virtuosity and an interest in optical illusions, science, and religion. His apparently contradictory allegiances include a revival of epic-scale history painting and technological inventions such as holograms, as well as a complicated relationship with the Catholic Church. Between 1949 and 1983, Dalí attempted to reconcile Christian iconography with images of dematerialization inspired by the discovery of atomic particles. Dalí described that period as “nuclear mysticism,” including the paintings “La Gare de Perpignan” (1965) and “Hallucinogenic Toreador” (1968–70).

His films, paintings, and writings are a complex treasure of Catalonian art history. They are a popular illustration of surrealism for everybody. Discrediting rational philosophy, Dalí ingeniously created hallucinatory images and the symbolism of our nightly dreams, where time goes backward and even bends space.

An underlying current of profound emotional intelligence is palpable in the retrospective of her work at Gazelli Art House. Exhibiting the many liberties Fine took in terms of scope and artistic range, the works independently represent near case studies in objective expression. There are paintings with shades and shapes of blue, as well as carefully drawn grid lines across a plane of yellow. Each piece demonstrates that during her fifty-year career, she was more interested in unlocking the depths of feeling, rather than the weight of materials.