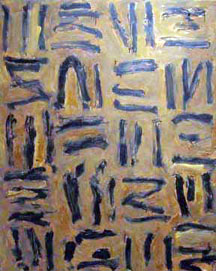 Despite a rough passage through postmodern theory, the grid has made another strong appearance at Elizabeth Harris Gallery in the paintings of Pat Passlof. Her most recent series, variations on a theme entitled Eighth House, relies heavily on the grid for structure. The best work in the show proves the staying power of this tried-and-true fundamental of painting.

Passlof hasn’t always been a grid painter or even an abstract painter. She came by her current motif honestly from a loose figurative style in the early 1990s to a less strictly structured abstraction in the late 1990s. It seems to be only in the new millennium that she decided to focus more exclusively on the theme. Even now, it appears, she hesitates. “Eighth House #6” and “Eighth House #10” are among the paintings that reveal this, a meandering abstraction that never seems to settle on a composition. The former is composed of squiggly yellow forms in a cobalt sea of paint. It reminds me of John Marin’s half-hearted stabs at abstraction. The latter looks like a loose Sam Francis—all color, no form.

When Passlof insists more staunchly on the grid, she produces impressive paintings. Her wet-in-wet style works off the grid’s rigidity. She groups thick lines in sets of three and abuts horizontal sets with vertical sets to create a tension of opposites. She’s never strict about the compositions, and a solitary horizontal line or truncated vertical is commonplace. In my favorite painting, “Eighth House #15,” black lines tile the plane in a somber ochre ground. Less imposing but equally large is “Eighth House #13,” in which the cad yellow lines are quickened by the painting’s flickering brushwork.

There is something totemic about these larger grid paintings. In Passlof’s work, the grid is a foil for form and for the properties of paint far more than it is a conceptual end. Her repetition of sets and use of the grid does not call to mind the cerebral work of artists such as Ryman or LeWitt. Sean Scully’s painting seems a more apt source of comparison. One is convinced that Passlof cares deeply for her lines and what they might represent. Her tendency to oppose these lines in a fragile balance seems elemental to her thinking, inseparable from her drive to paint. When a painter breathes new life into an old motif, she makes it her own. In that sense, Passlof is painting the first grid.

Wallace Berman: Off the Grid

Descending into the cellar at TOTAH feels like entering a sanctum sanctorum, the holy of holies. The leitmotif of this exhibition could be the theme of intimacy, images feeling like handheld windows into the artist’s psyche.