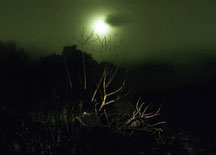 For sixty years the U.S. Navy hit the tiny Caribbean island of Vieques with everything it had. It stored vast quantities of munitions, including depleted uranium shells, on the fingerlike island’s lush west end and exploded them on its environmentally ravaged eastern tip. After an errant bomb killed a civilian security guard in 1999, simmering popular opposition to the bombing range reached full boil, and a thousand days of demonstrations finally forced the Navy to withdraw.

Although the Navy ceded 15,000 acres of its land to the federal Fish and Wildlife Service to create one of the largest nature preserves in the Caribbean, thousands of acres are still off-limits, choked with contaminants and unexploded ordinance. Enter Nin Brudermann, a Viennese artist living and working in Brooklyn, who viewed this wasteland as a real-life manifestation of The Zone: the forbidden, mystically toxic landscape of Stalker, Andrei Tarkovsky’s cinematic masterwork of Soviet futility.

Brudermann accompanied a scientific expedition to study the colonies of bats that have infested hundreds of thousands of abandoned munitions magazines in the former Naval Ammunition Support Detachment (hence N.A.S.D. Projekt Fledermaus). Attaching surveillance cameras to the heads of the apparently compliant members of the research team, Brudermann logged hours of video footage as she and the scientists tramped from concrete bunker to concrete bunker, gathering specimens and planting cryptic measuring devices.

From this raw material Brudermann has fashioned a compellingly creepy installation: blackened windows and walls; living plants in sepulchral stands; a dimly lit row of tiny squares resembling microscope slides; a large, eerily holographic photograph; and, dominating the room, a two-channel video projection of images from the expedition.

The video is mesmerizing. From its gorgeously soupy low-resolution murk—more Blair Witch Project than Stalker—phantasms emerge out of glowing flashlight beams, bone-white tangles of vegetation, and burning red disks of upside-down bats’ eyes. The two-channel presentation, part documentary, part performance piece, creates a diptych of seemingly aleatory real-time juxtapositions that play off each other like a Merce Cunningham pas de deux. The explorers’ hands and headlamps flash across the screens as they scribble out specimen tags, unfurl nets, and scrape droppings off the floor. Eventually the crew encounters its quarry—dozens of bats hanging like black stalactites from the concrete vault.

Several bats are captured, and the researchers collect sticky-tape samples of hair and bunker dust from their backs. Brudermann displays the actual tape specimens—one-inch squares mounted on Plexiglas—on the wall opposite the video screens. The dust has rendered the once-clear tape opaque. We can only imagine what weapons-grade toxins are aggregated here, and the artist (whose previous work has grappled overtly with political issues) seems to be inviting us to contemplate both the ecological and moral consequences of stockpiling such an overweening array of killing machines.

While remaining ostensibly empirical in her procedures, Brudermann plays on the bats’ mythic implications as sightless, virulent vampires (at times tipping her hand too much with campy horror-movie sound effects and organ blasts) and allows metaphors to flitter freely: paradise despoiled, damned souls, blind, blood-sucking greed, and bloodthirsty subjugation. The weapons have departed but left their demon spawn behind.

Yet from this desecrated dominion, the artist has wrung hard-won beauty and even a fragile glimmer of hope. In our debased culture, the redemptive role of art has become such a middlebrow notion that it’s a bit of a shock to come across the real thing, but Brudermann has pulled it off with exquisite understatement.

She has grown seedlings from kernels dropped by the bats, placing them in white pedestals sardonically (or poignantly?) labeled “SMALL ARMS/PYRO” “HIGH EXPL” “FUSE/DET” after the categories of weaponry in the magazines. In an adjoining room she has assembled a set of elegantly hallucinatory video stills drawn from the three phases of the expedition: bat inspection, plant inspection, and seed collection. And in a 44-x-64-inch photograph rendered virtually three-dimensional by its chiaroscuro, crispness of detail, and shallow depth of field, she has documented her serendipitous encounter with a Reina de la Noche cactus blossom, which blooms only one night a year. Almost lost against the blackness of the forest and encircled by bare, spindly trees, the flower seems to confront the moon directly above it with an admixture of defiance and mute vulnerability—a vanishing breath of beauty under a sickly, bat-ridden sky.

Las Playas Son Nuestras (The Beaches Are Ours)

Experimental dance pioneer Viveca Vázquez directs a performance on the beaches of Vieques and Piñones, highlighting the coastline as a site of contention.

Sixty years have passed since Uche Okeke wrote “Natural Synthesis.” Debates surrounding the manifesto’s influence—who is right to be named a member of the group, which younger artists are favored descendants, etc.—eclipse, to my mind, a greater dilemma. That is, are the opportunities for synthesis as available to artists today as they were to their forebears? What can be said of the resources available right now for those who wish to model their practice after the idea of a “natural synthesis”?

A 2016 film by Beatriz Santiago Muñoz addresses the contamination of Vieques.