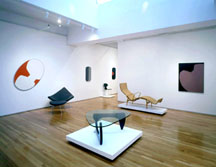 In 1936, a few years before the arrival of waves of World War II immigrants—and among them, many advocates of European modernism—Leon Polk Smith moved to New York City. During the following decade, like most of the other American artists of his generation, he embraced the avant-garde European movements wholeheartedly while searching for his own unique interpretations. Focusing in particular on constructivism and de Stijl, Smith mainly devoted himself to Mondrian’s redefinition of the grid and the interchange of form and space. That is, until the late 1940s, when rectangular shapes formerly floating on neutrally toned grounds began to twist and twitch in Smith’s paintings, morphing into bold curvilinear or zigzagged statements that extend toward the edges of the canvas. In these compositions, our perception of negative and positive space becomes blurred, while the distinction between foreground and background simply no longer exists. As a result, the abstract imagery appears as flattened (yet without translating into patterns), generating a strong sense of design.

This quality is pushed further by Smith’s employment of varying canvas shapes. From the circular “After First One” to “Kochecke” (German for “kitchen nook”), an oval hung on a diagonal, or “Yellow White Sun,” which includes two double curves and might be described as a mirrored image of a children’s book illustration, the diversity does not cease to surprise. Meanwhile, the palette is kept simple. Though never including more than two different hues and preferring to contrast one color with either black or white, Smith’s works from the 1950s on establish more than just a punchy dialogue between tonality and form: they manifest as poetic verses. While contemplating what might have sparked his inspiration for the deep lavenders, fiery reds, or grayish flesh that can be traced throughout his oeuvre, one is led back to Smith’s early biography, as well as to the industrial designs in vogue in the 1950s and 1960s.

Born in 1906, Smith was raised on a farm in Chickasha, Oklahoma, among the Choctaw and Chickasaw Indians, before Oklahoma became a state. Looking at the almost symbolic simplicity and Smith’s determined lines, one can only guess to what extent the artist’s upbringing and intimate introduction to Native American culture must have filled his visual vocabulary. The impact of contemporary design however, is beautifully elaborated upon by a concurrent exhibition at Washburn Gallery. Minimally labeled Forms and Functions in the 1950s, this curatorial gem juxtaposes Smith’s canvases with rare design classics by Verner Panton, Arne Jacobsen, and Bruno Mathsson, among others. Rather than deciphering the magic aura of Smith’s work, this contextualization contributes to the overall timelessness inherent in every curve, every angle, mass, and volume that determine Smith’s unpredictable compositions. Though clearly underrated in the context of twentieth-century art history, Leon Polk Smith was arguably one of the quintessential artistic spirits of his time, who succeeded in fusing primitive and contemporary originality into a harmonious symbiosis.

Djuna Barnes (1892–1982) remains one of the most important lesser known modernist figures. A true Renaissance woman, Barnes was a literary pioneer of modernism, writing queer novels like Nightwood (1936) and Ladies Almanack (1928), in addition to plays, poems, and her work as a New York-based journalist.