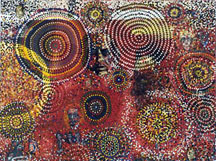 Way downtown at Studio 128, Larry Webb and Bob Witz exhibit paintings that nearly scream of the New York School’s influence. Looking at the work, I can all but smell the odor of turpentine emanating from paint-stained wooden floors of garreted Tenth Street lofts and the smoke curling from casually held cigarettes as intellectuals and artists discuss existential profundities. The 1940s and 1950s weigh heavily on these two painters—for better and for worse. Their resolute dedication to a particular era gives them integrity but sometimes makes their work seem dated.

Witz handles history with greater felicity than does his more somber comrade. This humor is a saving grace and contributes to the success of paintings like “Nietzsche/Pollock.” In title and style, it makes reference to abstract expressionist painting. Witz stipples like Pousette-Dart in a bright cadmium palette of yellows and reds. But he does things that would be anathema to the irascible generation, such as incorporating comic portraits of Nietzsche and Pollock in the pockmarked surface of his painting. This playfulness carries over into the gallery’s back room, where Witz’s best paintings, his small ones, are on display. One set of six small paintings is composed of little faces set into a grid of one-inch colored squares. Witz draws the faces by scraping into impasto paint with the butt of a brush. They’re the pedestrian faces we see around us, but colorful and alive.

Although a few bits of imagery are visible in Webb’s paintings, he’s never as insistent as Witz is with his faces. Form in Webb’s abstractions is never assertive, and this is a problem. When you abandon imagery in a painting, something else must assert itself in order to give the work a raison d’être. It could be form, as with the biomorphic surrealists. In could be gesture and color, as in de Kooning. It could be the tension between image and abstraction, as in Cecily Brown. If nothing asserts itself, you risk leaving the viewer wondering why the painting was painted. This is the case with many of Webb’s paintings, which seem to hang in an uneasy limbo between New York School abstraction and 1980s neo-expressionism. “Yea Gods” is a case in point. For all its ferocious coloring and hints at morbid imagery, the painting lacks conviction. It’s as though the painting’s forms were neither significant enough to clarify nor superfluous enough to jettison.

The work of both painters has the authentic feel of homegrown style. One would never question their integrity or suppose that they have not worked hard to get where they are. No way are they driven by the crass commercialism you occasionally sense in certain prominent artists. What Webb and Witz seem to lack, in their weaker moments, is the critical rigor and acute consciousness of historical precedent that much postmodern art exhibits. The focus remains on an era of painting now half a century old. Painters of that period privileged intuitive painting derived from gut instinct. In contrast to this, minimal and conceptual art in the 1960s asserted a place for the intellect in the process of making and analyzing art. Whether they agree or not, contemporary painters must come to terms with this legacy in their work.

The artist is the star soloist of the performance, and any arts worker who works in an artist studio—whatever position they hold—must understand that the crux of their job is to give the artist an environment at center stage to be free and creative. There is a certain intangible origin of the imagination from which ideas emerge and crystallize into artistic production. Such a birthing process requires the artist to harness the possibility for expression, free of constraint or limitation, and, in doing so, perhaps tap into a pure, unadulterated version of themselves.