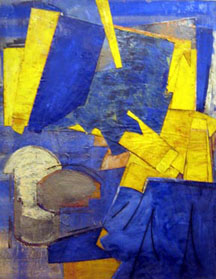 John Walker, “Ostraca I” (1977), acrylic and canvas collage on canvas.

As someone who has followed John Walker’s work since the “rediscovery of painting” in the early 1980s, I was caught unaware. I’d glanced at an ad for an exhibition of collages and immediately envisioned homey works on paper with Matissian colors, small enough for one to take home under one’s arm or put in the backseat of a cab. I was further lulled into complacency by a visit to the Cy Twombly show of paper works at the Whitney, many employing collage elements, along with Twombly’s spiraling scrawls and quivering paint strokes. But I wasn’t ready for what awaited me at the gallery. Sauntering into the main room, I faced six huge, approximately ten-by-eight-foot paintings, or collages, if you like. All the pieces are from the mid-1970s, ranging from 1974 to 1978, and the show constitutes a mini retrospective of a period of work that helped put Walker on the artistic map, at least in New York.

Collage as a medium was popularized, if not discovered, by the cubists Braque and Picasso. With his palette of rusty browns and warm and cool grays, Walker pays homage to cubism’s “hermetic” phase. The compositions with their angularity, beams, and crossbars of interlocking geometric forms also owe a debt to cubism. There’s an elephantine sense to the scale of these pieces. When compared to the fabrication process of collages by Picasso, Braque, or Schwitters, these Walkers require the involvement of the whole body, laboring like a construction worker, laying carpet, nailing shingles or spackling walls, instead of simply working from the wrist. The struggle of fabrication is palpable, and I got the sense from the overlays of canvas and heavy layers of grit and gels that the hides of these works had been cannibalized from other paintings. The looseness and spontaneity are matched by a gambler’s willingness to wager and sacrifice. Walker is courting disaster here, building these painterly houses of cards ever more precariously with the hope of hitting the jackpot. Great gobs of gel ooze out from between pasted sections. Some of the collaged components are half an inch thick with over-painting and scumbling. Lots of painters attempt to make acrylic paint look stressed, weathered, tough; most don’t do a very convincing job. At least in these works, Walker seems like one of the few with a touch that reads as authentic.

“Ostraca I” (1977) alludes to an interior with still life. Large patches of ultra blue bear a geographic character, like an aerial view of farmed fields. A notched oval and a tablet shape are used as stand-ins for figures or objects and in this picture are placed on an arching form in the lower left foreground. Balancing the right, charcoal lines on a deep blue form suggest the drape of a heavy tablecloth. A large expanse of yellow patchwork with a deep swatch of blue at its middle indicates a window and a curtain. A diagonal ray extends upward. Shades of blue from a near cool gray to deep ultramarine counterbalance a range of yellows, golds, and burnt oranges. The dryness of the bright colors seems to enhance their brilliance, while the earth tones somehow seem deadened by it. Historical references extend beyond early modernism in “Numinous II” (1978), which recalls Goya’s “Majas.” A pair of curving lines in intense red, embraced within a grid, overlays the lower third of the canvas, echoing wrought-iron balcony railings. Walker has replaced the young ladies with an aerodynamic half oval and dark blue tablet shapes. Broad striped bands along ether side take the role of louvered shutters, thus reversing the view from out of a window to looking into a window.

Recent collages are displayed in the front gallery. These pictures are a more conventional type in their use of glued paper, but with some pieces measuring over six feet high, they’re still large. Color harmonies are more jarring, a mix of iodine red, Prussian blue, blacks, and an occasional slather of brown, as if Walker had added a handful of loam from his current series of estuarial landscapes. These works seem more organically gestural while avoiding the heaviness of some abstract expressionism, with their use of the white paper ground and the watery medium of ink. Again there is the active presence of the artist, working on a collage on the floor, as we see from his footprints in “Untitled” (2003). Whole calligraphic strokes are cut out and applied as individual elements, which jazzes up the works, like a graffiti tag or the scribbled shape from a Stuart Davis painting.

Four drawings from 1974, white chalk on black paper, were a perfect foil to the “Black Board” works seen at the Twombly exhibition. The Twombly drawings seem relaxed, almost lethargically flabby, with their “first time best time” spontaneous coils filling the picture plane. The Walkers are angular, purposeful, down to business, no time to dally. But that doesn’t mean there isn’t a lot of energy spent working, erasing, and reworking, until things start to work.