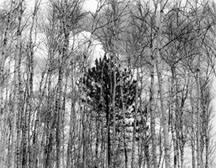 “If you see an apple tree growing in the woods,” says John Szarkowski, “you don’t instantly recognize it as an apple tree because it hasn’t been pruned. An apple tree in an orchard or a farmyard is constantly being pruned to let in the air and let in the light. It is half natural and half man-made.” This little parable capably describes the three rooms that make up the San Francisco Museum of Modern Art’s retrospective exhibition of Szarkowski’s photographs: two rooms pruned, one wonderful, ripe, and unresolved.

On this occasion, it is superfluous to go into John Szarkowski’s reputation as the twentieth century’s most influential American curator of photography. His twenty-nine years at the Museum of Modern Art speak for themselves. Although they represent a rupture in Szarkowski’s literal production of photographs, those years contributed productively to his conceptual growth as an artist: the liberties he takes now are the fruit of a lifetime and still the seeds of more daring work.

Filling the first two rooms of the retrospective are fifty photographs taken between 1943 and 1962. These images tell a well-orchestrated story of Szarkowski’s early investigations. Compositions are deliberate and intelligent. In “Marengo River Valley II” (1951), two dark tree trunks stabilize a wall of wild texture and exaggerate the length of the page. “Screen Door, Hudson, Wisconsin” (1950) hangs nearby and uses the frame of a screen door similarly: Dark lines section off the image and direct the focus toward the sensual idiosyncrasies of commonplace materials like wood planks and a rag rug. These pictures are orderly but sincere.

On the threshold to the third room and in along one wall hang six Sonoran Landscapes: Aggressively all-over in their compositions and topographically extraterrestrial, the impact of these landscapes is huge. They lead into the later phase of Szarkowski’s production, after he fell seriously in love with apple trees, after his tenure at MoMA, after his “life had changed,” as he puts it. The new pictures are at once more confident and more subtle in their abstract design than the earlier work. In “Meadow, Last Sun” (1997) Szarkowski does with light what before he did only with existing architectural detail or the branches of trees: He stripes his page and emphasizes design and structure within a textural template of grass and sky. In “Baldwin, Heavy Crop” (2001) there is no focal point at all, only apples and leaves and a bit of fresh air at the upper left of the picture.

“Photographic materials in themselves are not physically beautiful&#x2026;not like ivory or bronze.&#x2026;You make [a photograph] beautiful by turning it into a window&#x2026;you try to fool people into thinking that it’s made up of leaves and bark and grass. That becomes harder and harder as the picture gets bigger.” Scale was a constant for the young photographer. The early images appear at an almost invariably small scale, and this consistency makes them feel curated. Szarkowski says that sixteen-by-twenty-inch prints are “about as big as you can hold in your hands and look at. I think of my work, at least, in those terms.” In the third room there is no predictable print size: It looks as though the artist is thinking about issues of scale with respect to each picture individually, rather than as a highly produced body of work.

Many of the early images were included in the two books of photographs Szarkowski produced with grants from the Guggenheim Foundation. They still resonate with the internal coherence of those publications. His first book, The Idea of Louis Sullivan (1956), grew out of the idea that “photography could work as a creative kind of criticism, helping to put the building back into the social and aesthetic context that Sullivan demanded.” In these pictures, the young photographer built stories through juxtaposition, both within each picture and between pictures in the series as a whole. “Prudential (Guaranty) Building, Corner Column, Buffalo, New York” (1951–52) shows dejected posters plastered onto the aging intricacies of Sullivan’s curlicues. This picture also manages to hint at the hubub of Buffalo in the 1950s, as do many other photographs in this series: Imposing facades yield to little strips of breathing space, wherein people and cars date the landscape and historicize the project from our perspective, half a century down the road. In his second book, The Face of Minnesota (1958), Szarkowski worked with people and rural surroundings, and images from both series have a lyrical sequence that has tied them together since they were conceived.

In the third room there is a suddenly literal interest in sequence: Aside from the Sonoran Landscapes, there are two tetragrams and a triptych, each of which contains images that are related to one another on primarily formal levels. This room feels like a discovery, like finding out suddenly what the artist, the writer, the curator has actually been thinking about since he stopped making work in the 1960s. The images in this room do not have people in them, but they somehow compose a more human group of pictures than the early work, primarily because they are more revealing about John Szarkowski. This is, of course, the room that completes the parable: a room that holds what is perhaps hard to recognize as a cohesive body of work that’s hard to place as “early,” “mid-career,” or “late” but, once witnessed, is very exciting and suggests promise more than the finality one might expect from the last room in a retrospective. When asked, “What’s next?” Szarkowski replied that he didn’t know: “I’ve got to load some film holders and get out,” he said.

Sandra Phillips, senior curator at SFMOMA, organized the show. She says that she became aware of the late work first, and it occurred to her gradually “that someone who was making such wonderful and resonant pictures as a mature person might have made some pictures as a younger person that might be interesting and informative to look at.” The show will soon travel, stopping at the Museum of Modern Art in New York, a move that essentially brings John Szarkowski home.