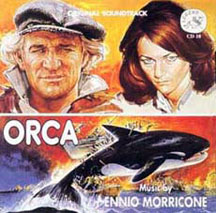 Context, as they say, is everything.

I recently stumbled across the Ennio Morricone soundtrack to Orca, a late-70s horror-of-nature flick about a vengeful killer whale, intended to cash in on the fear of all things aquatic ushered into the collective unconscious by Jaws a couple of years earlier. All icy foreboding and bursting-at-the-seams yearning, the music is lovely and weird and genuinely spooky, which makes its attachment to the cheaply Freudian schlockfest that is Orca both slightly dismaying and strangely, well, perfect.

In the context of the movie, Morricone’s score comes across as overblown and melodramatic, even slightly embarrassing, as the violins crescendo over Richard Harris’s weathered mug squinting into the middle distance or (the movie’s high or low point, depending on your point of view) a funeral procession of orca whales making their regal, dignified way through a nighttime ocean. The movie’s overt manipulation verges on the ridiculous; taken on its own terms, though, freed from Orca’s contrivances, Morricone’s score just feels completely different—disjointed, out of place, disquieting, and infinitely more compelling.

Music is, of course, inextricably bound to and informed by the visual, to the image. Few of us manage to escape the movie-in-the-mind that accompanies even the most banal pop songs. The sheer persistence of that old dinosaur, the music video, should be sufficient evidence of that. But the singular pleasures of film music aren’t in its ties to visual imagery, but to drama. Soundtrack music exists in a theatrical space, a gestural space, a staged space that exists at a remove from the listener, serving to heighten the passive experience of listening. Which may, after all, be the real appeal of film music minus film: its inherent surreality. The more exotic, the better, which is at least one reason the scores to Italian thrillers, spy capers, and seventies porn movies tend to be more engaging than those to, for instance, Lifetime Channel movies of the week.

Add to this the fact that film music, in its role of coloring and describing a scene while playing upon the emotions of the viewer, has tended to take readily to avant-garde musical idioms. Use of atonal harmonics and rhythmic-noise interludes that owe a great debt to Cage, Babbit, et al., crop up, surprisingly, in some of the most mainstream films imaginable. What’s interesting is the tendency for the average filmgoer to barely notice. A musical passage of screechy horns and shimmering phase shifts meant to convey the main character’s downward spiral into madness makes a kind of logical sense, even to those who would be disinclined to listen to such music under other circumstances. Noodling synthesizer blurps and vocoded harmonies are, likewise, perfectly acceptable in a movie with any combination of the following: robots, spaceships, distant planets, alternate universes, psychedelic journeying, dystopian futures.

So the general public’s receptiveness to the most out-there of experimental soundscapes, when experienced in the removed space of the cinema, is further evidence that it’s not so much what the music is as in what context it’s experienced that makes the difference. As a result, soundtracks as a genre offer some of the weirdest aural experiences to be had. Certainly plenty of film music draws from the legitimate avant-garde (like the use of Ligeti’s Atmospheres in Kubrick’s 2001: A Space Odyssey), but for my money there’s nothing quite like the film score that is experimental without quite meaning to be. What makes these kinds of scores great (pick almost any horror movie soundtrack from the early/mid-60s) are the ways in which, like Morricone’s Orca score, they overreach themselves.

The true pleasure of listening to, say, Piero Piccioni’s Italo-funk-cum–easy listening score for Radley Metzger’s 1970 softcore porn freakout Camille 2000 while hanging out on a Sunday afternoon doing laundry is the disconnect, the experience of foregrounding the background. It’s how the music is listened to that transforms it. Nowhere is this more apparent than in the recent spate of reissues of old sixties and seventies sound-library recordings, excavated from the dusty archives of production-music houses like Chappell, PIL, Peer, DeWolfe, and Montparnasse 2000. Canned soundtrack music, created in obscurity by session musicians for licensed use in theatrical as well as television movies, commercials, etc., is of course still around today—it’s just boring and inconsequential.

But the early '70s saw a brief golden age of experimentation due to—due to what, exactly? Well, call it the tenor of the times. Presumably there was enough of a market for squonky easy-listening space jazz to allow library composers like Nino Nardini and Roger Roger room to indulge their most adventurous impulses. Throw in the requisite cheese-funk and fat organ riffs and you have a genre whose rewards speak for themselves. Thanks in large part to excellent comps by Luke Vibert (Nuggets and Further Nuggets) and Barry 7 (Connectors 1 and 2), the last few years have seen an unprecedented interest in library music as a thing unto itself, as opposed to being of interest primarily to DJs, as it had been for years.

Recently reissued from Vadim Music is Stringtronics: Mindbender, a legendary library recording from 1972. (Original mint copies have been known to fetch almost a thousand dollars from die-hard collectors.) A sort of semiconcept album masterminded by library veteran Barry Forgie, the CD starts off with a suite of six disparate compositions with mostly one-word, New Age–cum–psychedelic titles like “Catharsis” and “Dawn Mists.” Breaking out everything from balalaika to bongos, and predicated on a base of blissed-out strings and chilly saxophone, Mindbender is music that’s deeply cinematic while managing to elude any particular film rubric. Whereas the music written for a particular movie usually bears the imprint of that movie’s specific genre—the squinty-eyed coolness of Morricone’s work with Sergio Leone or the edgy insistence of Bernard Herrmann’s id vs. superego Hitchcock scores invariably evoke a particularly circumscribed parade of settings and actions—library music’s lack of such specific focus means that it tends to draw from an array of highly generic musical reference points, resulting in some particularly odd combinations of styles (electro-hoedown, anyone?).

The best film music has a life completely separate from the film it was written for, even if, in the case of Mindbender, the movies in question are wholly imaginary. At any rate, I personally have already created an imaginary movie in my head to which Mindbender is the imaginary soundtrack. Arctic locales and hot-air ballooning feature prominently.

I’ll tell you about it later.

Sound Explorers: Sound House and This is the Color Described by the Time

This month, two new exciting productions, Sound House by Stephanie Fleischmann and This is the Color Described by the Time, conceived and directed by Lily Whitsitt, radically reimagine theater making, with symphonic results.

Waves of light, sound, and electric current flow throughout Transformer: Native Art in Light and Sound to demonstrate the vitality of Indigenous contemporary art in the digital age.

by Christy Gast, with an afterword by Dr. Bárbara Saavedra

I have been working in Tierra del Fuego for five years as part of the research collective Ensayos, which brings an international group of artists and social scientists together with ecologists and locals to think through environmental and sustainability questions in the region.