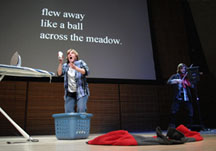 "Kafka Fragments," Györg Kurtág’s song cycle presented in Dawn Upshaw’s Perspective series at Carnegie’s Zankel Hall during mid-January—with a level of pomp befitting a new staging by director Peter Sellars—was completed and premiered back in 1987. As the Romanian composer’s Opus 24, Fragments fits about midway through his official oeuvre; concertante, an orchestral piece with violin and viola, is Opus 42 and the most recent score from a composer who turns 79 in February.

At about one hour long, Fragments is also Kurtág’s big work, regarded as a magnum opus from an artist whose international reputation has lofted over the past decade, acclaimed as the post-Webern master of brevity and intensely musical condensation. Scored for soprano and violin, two companion instruments in the upper registers, its musical means are of penetration, its timbral effects veering from fleeting delicacy to slashing harshness. Durational devices run rampant among the forty songs, from compressions that hurtle past in a matter of seconds to “The True Path,” the somber second of Fragments’ four movements, which Kurtág dedicates to Pierre Boulez. (The composer’s works are studded with dedications, homages, and references, like a daunting and evocative thicket.) If you got the impression that this work qualifies for the old honorific “uncompromising,” you would not be wrong.

As its libretto, Fragments extracts snippets and isolating reflections from Franz Kafka, the 20th-century’s master of conflicted revelation. Chosen largely from letters to Milena Jesenska and from the so-called Blue Octavo Notebooks, a series of school exercise books Kafka used during a pre-1920 hiatus from his famed diary, they range from ironic bemusement (“Coitus as punishment for the happiness of being together”) to the swag of self-loathing (“In the struggle between yourself and the world, side with the world”). A few resound with fantastical imagination, with a great horse breaking through a ceiling and jaguars draining sacrificial jugs. But by and large, the texts are philosophical orientations; Max Brod, Kafka’s friend and executor, left these particular notebooks out of the collected diaries, writing that they “are made up almost entirely of literary ideas, fragments, and aphorisms (without reference to the everyday world).” Small wonder that Kurtág, one of the more reticent people in contemporary art, gravitated towards them for his big cycle.

Musically speaking, the final Zankel recital of Fragments by Upshaw and her accompanist Geoff Nuttall (first violinist and cofounder of the St. Lawrence String Quartet) played as a sonic triumph. Upshaw concluded the early, uneasy lullaby “Berceuse I,” sustaining the final word “Kind” (“child”) with low, quavering, and unwavering intonation as she paced to the left of the stage. In the second movement’s single song, Nuttall double-stopped with an etched firepower that’s all the more startling for its deftness, while Upshaw mounted a stepladder with an extension cord that she would, yes, noose around her neck—but let’s leave Sellars’s staging decisions aside for a moment longer. Earlier, in a flower song dedicated to Schumann, Nuttall’s up-bending harmonic advance continued unabated when the voice was done, spotlighting both his instrumental skill and the vivid dexterity Kurtág invests in the violin line. Scaled without amplification to Zankel’s 600-seat dimensions, Upshaw and Nuttall delivered the dense grasp of Kurtág’s cycle. It’s an exhaustive brace of songs, pared to a core of expressive force by a composer who’s taught voice for years at the Liszt Academy. (The dozen minutes of his later piece for soprano and ensemble, to Samuel Beckett’s swan song “What Is the Word,” are even more harrowing.)

As to Sellars’s Zankel staging, the less said here the better, as the point of Fragments remains, I trust, a musical one. The director, who achieved renown with Mozart operas in the '80s, and who’s worked with Upshaw on both Stravinsky and Messiaen, screened lyrics and sporadic sepia photo projections by David Michalek. (Does a hound song sound better illustrated with a hound series?) Upshaw finished Kafka’s exhortation, to write unto lacerating his face, by pressing the clothes iron she wielded onto her cheek, which drew neither gasps nor titters from the full house but may beg the question of what she was doing at an ironing board in the first place. In a staging of Schubert’s seminal cycle "Die Winterreise" by choreographer Trisha Brown several years ago, the excellent baritone Simon Keenlyside sang one song suspended supine in several dancers’ arms; that flaunt may have been no less musically gratuitous than Sellars’s efforts, but some visceral revelation about a singer’s posture and projection lingered. Not so with Upshaw and dish detergent.

Fragments had its Carnegie premiere upstairs in Weill Recital Hall in 2000, where Susan Narucki and Daniel Phillips played the cycle with unadorned intensity. The piece was in a compromised situation then as well, presented as the second half of a Kurtág concert to replace a four-hand piano recital he was to have played with his wife Marta from the astonishing, wildly varied pedagogical exercises Jatekok. The composer hadn’t finished a commission the London Symphony Orchestra was to premiere that week at Carnegie’s main hall, and dropped the recital. The organizers recovered the evening with, remarkably, too much of a good thing; Fragments followed a first half including the trio Hommage à R. Sch. (at Carnegie this March, with James Levine at the bench). Some, sated by the hefty offerings, left early.

There were few leavers at Zankel, and surely Sellars’s theatrical involvement was instrumental in selling out the three Fragments performances. (Having sung the 20th-century’s late great vocal work, Upshaw continues her series with its opening blast, Schoenberg’s inimitable Pierrot Lunaire, on February 13.)

Several CDs of the Kurtág cycle are available. Adrienne Csengery—the soprano with whom the composer developed it in the mid-80s—has recorded it for the Hungaroton label with violinist Andras Keller. ARS Moderno has Audrey Luna with Harvey Thurman, “and we did great work with Kurtág when we performed and recorded the piece,” Luna said in an e-mail. Anu Komsi’s version with Sakari Oramo, for the Finnish label Ondine, seems most readily available in stores and on the Internet.

Csengery has called Kurtág’s vocal works “camouflaged operas,” and that operatic range was evident in Upshaw’s commanding voice at Zankel. As to the camouflage, much can be hidden in plain sight: In “Florentine Nights,” Heinrich Heine’s narrator describes a recital by violinist Nicolai Paganini: “With every stroke of the bow, visible images and situations rose before my eyes.” The instrumentalist who supposedly sold his soul to the devil for his chops “told me in musical hieroglyphics all kinds of startling stories.” Kurtág’s "Kafka Fragments" thrives within such latitude.

The Revitalization of Caspar Brötzmann

On the introductory track of The Tribe, Eduardo Delgado-Lopez on bass and Jon Beuth on drums establish a stable rhythmic structure into which Brötzmann explodes with a bouncy and pseudo-riffy guitar part that soon segues into more sinister ambient intonations. Toward the end of the track, Brötzmann unleashes a chaotic melody that could easily have served as the mold for Kurt Cobain’s solo on “In Bloom.”

Hulda Guzmán: my flora, my fauna

Guzmán’s solo exhibition at Alexander Berggruen is her first in the United States since then, and it finds her turning, mostly, to views around her studio, where she was confined during COVID quarantine. It’s a breathtaking retreat. From the artist’s window, palm trees spread out over lush tropical hills.