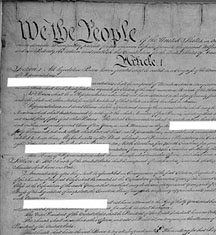 Alexander Hamilton, an Exhibit at the New York Historical Society

There is no relief to our real Disease[,] which is democracy.—Alexander Hamilton

Cosmology is the study of origins, a science of beginnings. And although it is a branch of physics, it is also true that nations, peoples, and states all possess cosmologies as well. Political cosmologies define the myths that bind a people together and define—in the most illusory way—the very stuff of their history, justifying certain forms of life over others. These myths are constantly reworked and refashioned. Americans are no different in this fabrication of political identity, except that our cosmology is political in the most mythic sense and—especially since 9/11—it has come to define not only origins, but a sense of destiny as well.

A new trend is afoot: a real effort to redefine America’s political mythology, its political past through a new resurrection of the "founding fathers": that group of freethinkers who initiated a rebellion against political tyranny and laid the groundwork for a democratic society grounded in the principles of individual liberty and equality. Most recently, the New York Historical Society housed an exhibit inspired by one-time National Review editor Richard Brookhiser’s book, Alexander Hamilton, American, which was released in 1998. While Alexander Hamilton: The Man Who Made Modern America is billed as a "historical and educational project," its real purpose is a refashioning of our ideas about the intentions of the American political, social and cultural project.

In the show’s benign simplicity, the real Alexander Hamilton is lost behind a barrage of multi-media images. An opening video montage compares Hamilton and Jefferson, stressing Hamilton’s positive views on ending slavery and Jefferson’s backwardness on the subject. As an exhibit, it provokes no thought, inspires no form of interest. Rather, it is a tour of historical objects—from letters and correspondence to other objects from his possession—through the last days of his life. The pistols of Hamilton and Burr are displayed, which were used in the duel that ended Hamilton’s life.

But in reality, the significance of this exhibit is not in what it has to show, to display, or to communicate. The significance is something that runs much deeper—into the political precepts that underlie contemporary American life. Did Hamilton actually "make modern America," as the title of the exhibit suggests? It is a dubious claim—but one thing is becoming rapidly clear: the real impulse of America’s revolutionary past ought to be saved from the merciless reinterpretation that it has been undergoing by conservative ideologues.

The Triumph of the Counter-Revolution

It may not be obvious to the streams of New Yorkers and other tourists who have visited the exhibit over the past several months, but they have been witnessing the symbolic victory of a specific vision of history: an interpretation of politics and economics that has won out over the course of the last 25 years in American life. Hamilton’s ideas about government, about the economy, and about the nature of democracy have been embraced by contemporary conservatives. The New York Historical Society’s exhibit should therefore be seen as little more than an expression of this trend.

The American revolution was not simply a revolt against taxation and for national independence. It was also a political and cultural movement away from what had characterized social life in the "old world." Hierarchy, aristocracy, inequality, status—all were the stuff of European life in general and of English society in particular. From the 1740s through the first rumblings of the revolution, it was also quickly becoming the way of life in the American colonies as well. Critics of the time saw that as wealth was being accumulated by new mercantile interests, new inequality was emerging. Capitalism began to take root in the colonies and it was quickly becoming evident that the old world values of inequality, of asymmetrical power relations, and of hierarchy and privilege were being erected on the soil of the "New World."

The revolution was therefore not the tame nationalist revolt that it has always been made out to be in the American educational mythos—it was also a project to construct what was referred to at the time as a "republican civilization," or to create a political society that would be characterized by true equality and freedom. Property was to be distributed equally, based on merit, and the general consensus of the time—from thinkers such as Noah Webster and Thomas Jefferson—was that an inequality of property and wealth would lead to aristocracy, hierarchy and, ultimately, the elimination of human liberty.

But Hamilton was different. He believed that there was an inherent, natural inequality between individuals. Society was made up of the mass of people who were largely ignorant and driven by passions rather than by intellect, as well as an elite, educated, talented few that would be able to guide society, politics and the economy. Economics was placed above politics. For the general welfare, the state was to aide economic growth by promoting manufacturing. He created the city of Paterson, NJ as a center for industrial America and promoted his Society for the Establishment of Useful Manufactures as an organization which would promote modern industry. Of course, Hamilton readily admitted that inequality between classes would eventually become acute. But this was to be taken care of by a strong central government that would not allow the interests of the majority—workers and farmers, for example—to push for political measures that would in any way endanger the interests of industrialists.

The impulse of the American revolution was not dead once the Constitution was signed and the new government was appointed and elected. Quite to the contrary, for many decades—up through the beginning of the Civil War, in fact—the promise of the revolution was its ability to guarantee that inequality, hierarchy and the vestiges of feudalism and tyranny would not emerge in America’s "republican civilization." The prime threat to the ideal of republican freedom was the development of the new (capitalist) economy. Social critics and writers of the early nineteenth century—such as John Pickering, Theophilus Fisk, Langton Bylleseby, Orestes Brownson, and countless similarly forgotten others—objected to the new forms of inequality that were forming as capitalism evolved.

Hamilton’s vision of politics was not much of an improvement from his ideas about the economy and its social effects. His deep skepticism of the "masses" made him cling to a neo-monarchical system of government. Although his contributions to The Federalist Papers were among the most impassioned pleas for a republican form of government, his true ideas were in opposition. Hamilton opposed any extension of democracy beyond the small circle of elites. And unlike Thomas Jefferson and especially Thomas Paine, who actually went to France to encourage revolution, Hamilton advocated joining with England to crush the French Revolution.

Hamilton’s anti-democratic positions contradicted the very political impulses that had led to popular support for the revolution against England. The American Revolution was a revolution not only against England, it was also one against inequality, against wealth, and against hierarchy and privilege. It was a revolution that, as the historian Gordon Wood has argued, did not seek to burn the rich and have one class supplant the other; it was a revolution which changed the ways that people related to one another. It set in motion ideas of autonomy and equality that would need to be dealt with if a capitalist economic order were to emerge. The counter-revolution was a political movement away from the radical tenets of the American revolution, and Hamilton in many ways can be seen as the intellectual and political forefather of this counter-revolt.

Two centuries later, we now live in a society that is deeply marked by inequality and dependency, by a subservience to our workplace and to the arbitrary exercise of power that is wielded by those that control it. It is simply irrelevant to talk about this in monetary terms. The real truth is that Americans work more than any other advanced capitalist country, enjoy less vacation time, and have less access to adequate housing and health care as well. Tied to their workplaces, Americans are forced into a life of economic dependency. Lacking union power or other forms of employee organizations to represent their interests, they are subjected to a daily form of subservience. Perhaps it is an irony to say that in the world’s "greatest democracy" the average American spends, on average, no less than 50% of his or her waking life within a specifically anti-democratic, even authoritarian institution: the workplace. It is no exaggeration to say that the economy organizes the entirety of our daily existence, shaping our values, our cultural consumption, our diets, and our very understanding of political life itself. Of course, this is not Hamilton’s doing, but it is a reality that has sprung from the shadow of his vision of American life.

Conservatism has always seen to it that the power of the few triumph over the power of the many. It has always been interested in protecting privilege and hierarchy. It has always been skeptical of the masses and their call to broaden democratic life. These were also things that Hamilton stood against; they are also decidedly absent from the exhibit, and for good reason. Museum exhibits such as this are meant to enshrine established views. And the reality of any uncritical acceptance of the historical past is to dissuade critical thought from inquiring into the past itself: To prevent a more authentic, more truthful account of our political traditions and the political intentions and visions of the real proponents of democracy and the expansion of human liberty.

The triumph of economics over politics, of capitalism over democracy, is the reality of the contemporary American conservative vision. The celebration of Hamilton therefore ought to be seen in this context. Is it any wonder that, as you walk into the exhibit, you are forced to walk through a massive $10 bill draped over the building’s edifice? The celebration of Hamilton is also another attempt by the American right to take possession of the Enlightenment project and couch it in their own terms and interests, bending its actual impulse toward conservative, even reactionary ends. And this is a new, vigorous trend, ranging from Gertrude Himmelfarb’s recent book on the Enlightenment, The Roads to Modernity, to the very reinterpretation of the American Revolution itself.

After reflecting on the historical and political implications of this seemingly innocuous exhibit, I came away with the overwhelming feeling that we must once again embrace the values of liberty in the face of domination, of equality over that of inequality, of autonomy and independence over that of subservience. These values do not belong enshrined in even the most venerated of museums, as relics of a bygone era—they must continue to reside in the political conscience of every citizen of a truly democratic republic.

A Literary Collective of Care

During the time when students were required to make decisions about their upcoming fall semesters, I was enrolled in a series of political science and literature courses in which it seemed that all the seminal figures of study had passed through the West African city in moments of artistic growth, pan-African organizing, or simple, unabashed leisure. I, too, am an artist seeking growth, I told myself. A young, Black woman from the United States who felt her place within diaspora. A college kid who wanted five months away in a new place with new people.

A Study of Form and Individuality

It’s opening night of William Forsythe: A Quiet Evening of Dance at the Shed, and the audience files into the spacious black box theater, nearly drowning out a gentle soundtrack of bird chirps with pre-show conversations. Per the program, we will be treated to work compiled from different time stamps along William Forsythe’s career: newly commissioned pieces (Epilogue and Seventeen/Twenty-One) stand alongside existing repertory (Dialogue (DUO2015) and Catalogue) re-worked over the past 20 years.

On Salt Creek: Flows of Rivers and Peoples